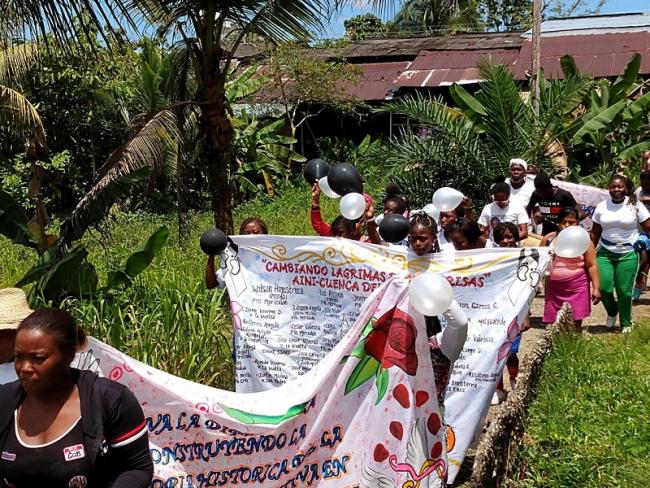 In recent weeks, seemingly every day there is news of another massacre in Colombia. On August 11, five teens were slayed in Cali, and five days later eight more youth were killed in Nariño. The following week, there were massacres in Arauca, Cauca, Antioquia, and another in Nariño. Then on September 7, there were three massacres in 24 hours, two in Antioquia and one in Bolívar a mere two days after a massacre left three dead in Cauca. On September 9, a video circulated social media showing police in Bogotá killing Javier Ordóñez. Twelve more died in the ensuing protests.

Massacres have risen 30 percent during the first two years of Iván Duque’s presidency. Through August 25, Colombian think thank Instituto de Estudios para el Desarrollo y la Paz (Institute for the Study of Development and Peace, Indepaz) registered 55 massacres this year. The killings coincide with areas where social leaders have been murdered in recent years, and where the now demobilized FARC-EP guerrillas previously controlled territory. While the massacres follow past patterns of violence, they also indicate new dynamics, where the actors and interests behind attacks are not always clear-cut.

The regions with the most massacres this year have been Antioquia with 12, followed by Cauca and Nariño on the Pacific coast with seven each, and Catatumbo on the Venezuelan border and Putumayo on the Ecuadorian border with four each.

“There is an interest to control these areas: Control of strategic corridors, of places for political control, and of places where there is conflict between armed groups,” says Abilio Peña, a human rights defender based in Bogotá who works with the NGO Ansur, which gives self-protection workshops to grassroots communities .

“It’s obviously systematic. It isn’t coincidental that there have been more than 40 massacres this year. There is a pattern,” says Peña.

Leonardo González, author of the Indepaz report, pointed out the conflict between armed groups to control territory is linked the failure to implement the 2016 Peace Accords with the FARC-EP.

“There are two phenomena. One is the homicides of social leaders, and the other is the massacres,” says González. “These phenomena began to appear in 2016, and with a sharp increase more recently. We could say this has been a response by armed groups to impose order in areas vacated by the FARC.”

The apparent deepening of the conflict should not be viewed in isolation but, instead, as connected to cycles of past violence. “There have been patterns throughout history. During the times of President Turbay, torture was more frequent. During the time of Samper and Uribe, there were more forced displacement,” Peña says. “Today, they have combined selective assassinations with massacres as strategies of social control. As a way to exercise dominance in certain areas. And, obviously, there are economic and political interests in these areas.”

Willian Aljure can also speak to the connection between today’s violence and the past. He lives in the municipality of Mapiripán, on Colombia’s eastern plains, a disputed territory. He is the president of a network of Indigenous, Afro-Colombian, and campesino communities called Comunidades Construyendo Paz en Colombia (Communities Constructing Peace in Colombia, Conpazcol). Aljure has lost parents and grandparents to the Colombian conflict, and his land is currently occupied by the palm oil company Polygrow.

“This isn’t new, at least, speaking from the experience of the Aljure family. My grandfather had signed peace accords with the government that in the end weren’t upheld,” he says.

The Colombian government has denied that there is conflict. As if lifted straight from the Principles of Newspeak, President Duque described the recent wave of massacres as “collective homicide.” The Colombian Defense Minister blamed drug trafficking, enraging victims and using a common trope for the state to avoid responsibility for its own inaction to prevent these tragedies.

The Colombian High Commissioner of Peace, Miguel Ceballos, went further, denying that there were any massacres at all, and attributing the deaths to disputes between drug-traffickers, except for the assassination of the eight youths in Nariño.

Massacres as a Form of Social Control

Massacres are not collateral damage as armed actors dispute territory. They are an intentional strategy to consolidate social control.

Massacres are intended to send messages to those who live. “If they want to have territorial control, they need to have social control,” says González of Indepaz “For example, illegal armed groups are massacring people for having violated the quarantine. So, it’s a way to tell the population ‘we are the ones who are in charge here.’ Massacres are a message to the population.”

Aljure agrees. “They are different contexts, but in the end it’s the same story. And the story is to kill at all costs to send a message. In Nariño, they were adolescents having a good time, and look at what happened… …They aren’t killing old men anymore, just look at the quantity of children they have killed the past few weeks,” he says. By killing children, those behind the massacres are trying to intimidate any resistance that might oppose their domination.

Another contrast between the current moment and the past is the clandestine nature of the modus operandi of the armed groups carrying out the violence. For example, in 2017, 62 percent of murders of social leaders were perpetrated by an unknown assailant or assassin.

“It isn’t like an armed group is arriving to an area, threatening people, and then carrying out a massacre,” González says. “It’s a new modality because before you knew the identity of the armed group and you knew what this group was trying to accomplish. Today, we don’t know who is moving the chess pieces of war, who is winning and who is losing.”

Enrique Chimonja is a human rights defender with Fellowship of Reconciliation and Conpazcol, and a victim of the armed conflict who lives in the department of Huila. He adds that in addition to the clandestine nature of today’s illegal armed groups, the political goals of these organizations have been subordinated to economic aims.

Chimonja says that the economic interests go beyond drug-trafficking. “The model has no other option but to resort to what it has always done,” Chimonja says “And that is to resort to violence and criminality. It has to take advantage of the state’s weakness to displace and continue consolidating its economic project of accumulation without limits that characterizes the neoliberal model.”

Armed groups aim not only to control drug-trafficking corridors but the resources in these disputed regions. Extractive economic projects exist in many of the municipalities where there have been massacres. For example, in El Tambo, Cauca, where six were killed on August 21, there are solicitations for coal mining licenses. In Samaniego, Nariño, where two massacres happened this year including the eight youth killed in on August 15, there was a meeting between the mayor and the National Mining Agency in 2017 to explore the extraction of gold and other minerals. Arauca, where five where killed on August 21, has extensive oil interests. The Canadian company Colombian Crest Gold Corp owns gold mining titles in the municipality of Venecia, Antioquia where three were killed on August 23, and the municipality of Andés, Antioquia, where three were killed on August 28, has a dozen mining concessions in gold, coal, and other minerals with solicitudes for dozens more. In the region of Catatumbo, where four massacres have happened this year, there are agro-industrial and mining interests at stake.

Aside from achieving territorial control and controlling populations, Aljure refers to a third factor which he was almost reluctant to admit. The current political context of Colombia includes the recent order by the Supreme Court to put the former President Álvaro Uribe Vélez on house arrest.

Peña says that while there is no direct relation between the order to arrest Uribe and the massacres, there are correlations. He says that since the days of Pablo Escobar, a sort of mafia-drug trafficking-landowning class had been rising in power, peaking with the arrival of Uribe to the presidency in 2002. “And now, we are in a moment where this power is in decline, and the capture of Uribe is a symbol of this. However, this doesn’t mean the power will end soon,” Peña says.

“The spirit, the mentality of paramilitarism has been conceived by the ex-president Uribe. With the Convivir, with the massacres, with the parapolitica, are all connected to the ex-president Uribe. And this continues intact. This hasn’t changed,” Peña says. The Convivir was a legal mechanism created in the 1990s to allow for private citizens to defend themselves against the guerrillas, but became a nexus for coordination between paramilitaries, militaries, and private companies. While governor of Antioquia, Uribe advocated for the use of Convivir throughout the department. The “parapolitica” scandal involved over one hundred Colombian lawmakers and politicians under investigation for relationships with paramilitary groups. Recently released cables show that during the Bush Administration, the U.S. Defense Departments strongly suspected Uribe of having ties to paramilitary groups.

There has been fear growing in the territories of Colombia. Aljure, as president of Conpazcol, is concerned about community of the Naya River which received news of a possible massacre on August 23. This Afro-descendent community on the Pacific Coast lives in a disputed region, where three people disappeared in 2018.

Aljure says that more international attention to the massacres is needed. “Not just to talk about what already happened, but to avoid what may happen.”