Ten days into the strongest challenge yet to President Guillermo Lasso’s government, the protests only appear to be growing. 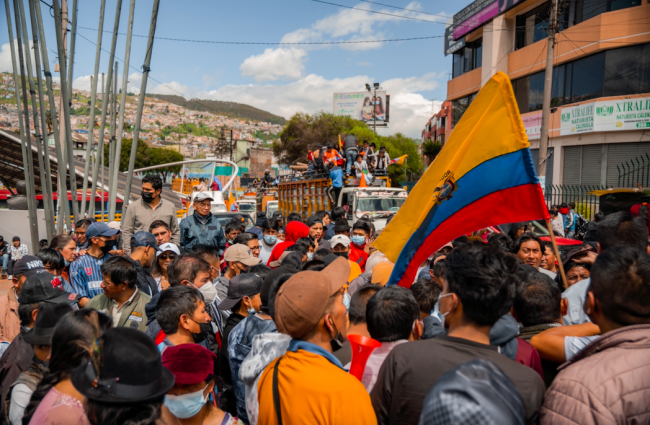 Ecuador’s powerful Indigenous movements once again took to the streets on June 13 to press the conservative government of President Guillermo Lasso to agree to their list of economic and social demands. The government’s repressive response has led to many injuries and arrests and several deaths, as the situation continues to grow more intense.

Lasso called for dialogue in the face of the strongest challenge to his one-year-old government, but opponents insist that they are not interested in negotiations but rather a change in policy.

Leading the charge is the Confederation of Indigenous Nationalities of Ecuador (CONAIE), an umbrella group of Indigenous organizations that activists founded in 1986.

The CONAIE, together with student groups and labor unions, put forward a list of 10 demands that include a freeze on fuel prices, a halt to the expansion of oil and mining exploration, a debt moratorium for small and medium-sized farmers, subsidies for agricultural producers, and guarantees that key sectors of the economy will not be privatized.

Activists launched an indefinite general strike that has included blocking roads across the country to press these demands.

On June 14, authorities arrested CONAIE’s president, Leonidas Iza, on charges of sabotage for having participated in blocking the Pan-American highway in the central highland province of Cotopaxi. A public outcry led to Iza’s prompt release, but also intensified and radicalized the protests.

Lasso had previously lashed out at Iza, branding him as an “enemy of democracy,” calling him “a violent man,” and accusing him of seeking to topple his government.

Scenes of a Police State?

In an attempt to contain the mobilizations, Lasso declared a state of emergency beginning at midnight on June 17 in the three highland provinces of Cotopaxi, Imbabura, and Pichincha (which includes the capital city of Quito), where the initial protests were most intense. On June 20, Lasso extended the decree to six of Ecuador's 24 provinces, even as activists defied the decree and continued their mobilizations.

A state of emergency is an executive decree, defined in the constitution, that enables the president to suspend the right to assembly and call out the military in times of disturbances or natural disasters. With the military out in force, the country began to acquire the image of a police state.

Delegates to the national assembly attempted to strike down the decree and called on the government to conduct a “serious, clear, and honest” dialogue with the protesters.

But the sustained protests only appear to be growing. Tens of thousands of activists continue to march in both Quito and the commercial center of Guayaquil on the coast to press Lasso to agree to their demands.

Lasso responded with characteristically repressive actions, with more than one hundred arrested for their actions. Police fired tear gas, water cannons, and so-called nonlethal projectiles at the activists, injuring more than one hundred people, some of them seriously. At least three people have died so far in the demonstrations.

Byron Guatatoca, a Kichwa man in the Amazon town of Puyo, died after being hit in the face with a tear gas bomb at a roadblock.

On June 25, police raided the Casa de la Cultura in Quito. They allegedly were searching for “war material, such as explosives and handmade weapons.” The center and surrounding park space has often served as a base for thousands of militants and social organizations. When nothing was found, the police decided to use the center for their own base of operations.

The Casa de la Cultura is an autonomous cultural institution that was created in 1944. The only other time it has been similarly occupied was during the military dictatorship in 1963.

Lasso’s defense minister, Luis Lara, said that the protests were placing Ecuador’s democracy at risk. Lara claimed that the country faces a “grave threat” from “people who are preventing the free movement of the majority of Ecuadorians.”

“These actions go beyond a citizen protest,” Lara asserted. “This amounts to a deliberate effort to use violence to threaten democracy and endanger institutions.” He warned that the military “will not allow the constitutional order to be broken or any action to be taken against democracy and the laws of the republic.”

The military alleged that links existed between drug trafficking gangs and the demonstrations. Social organizations rejected that assertion, retorting instead that it was the government’s repressive actions that were threatening the country’s democratic institutions.

Lasso responded to the social mobilization’s list of 10 demands with a detailed, 16-page letter in which he asserted he was making progress on addressing these concerns. He agreed on June 21 to participate in a “frank and respectful dialogue process” with the CONAIE “for the good of the country.”

Indigenous leaders said that they would not meet with Lasso’s administration until the government withdrew the security forces, and that any talks would be conditioned on a repeal of the state of emergency. Iza declared that Lasso’s response was only exacerbating the situation.

Amnesty International has released a statement declaring that the repression of the protests is causing a human rights crisis. The organization highlighted reports of harassment, excessive use of force, arbitrary arrests, ill-treatment, and criminalization of protesters, journalists, and human rights defenders. It called on Lasso to address the structural causes of the unrest.

Ecuador’s powerful Indigenous movements have long played the role of kingmaker in the country’s politics. Beginning in the 1990s, grassroots activists repeatedly took to the streets in opposition to government policies that went against their interests. They successfully blocked some of the worst aspects of neoliberal economic policies and even pulled down governments that ruled against their interests.

In October 2019, as part of the estallido social or social outburst that spread across Latin America, activists in Ecuador against engaged in sustained protests against conservative president Lenín Moreno’s economic policies that benefited the wealthy at a cost to the poor and marginalized.

Moreno had attempted to remove longstanding fuel subsidies, as well as impose other dramatic austerity measures that would have a disproportionately negative impact on workers and Indigenous peoples.

A transportation strike on October 4, 2019 quickly spread to other sectors of society that were equally displeased with Moreno’s policies, with CONAIE and the United Workers’ Front (FUT) taking the lead. The government reacted to the protests with repressive measures, including arresting political opponents on dubious charges and sending others fleeing to embassies with requests for political asylum. After 11 days of large protests, Moreno finally backed down and abandoned his plans to eliminate the fuel subsidies.

These protests against regressive economic policies continued into Lasso’s administration. Street protests in October 2021 led the government to suspend a push to increase the price of fuel. In January 2022, CONAIE leaders once again organized protests over fuel prices, which have almost doubled in the past two years.

Indigenous peoples have been disproportionately affected by rising inflation rates, unemployment, and poverty. The coronavirus pandemic exacerbated all of these factors. The country is also being plagued with a rise in organized crime apparently related to drug trafficking that has led to deadly clashes in the prisons with massacres killing hundreds of inmates.

Guillermo Lasso: Honeymoon is Over

Lasso, a conservative banker and adherent of the reactionary Opus Dei sect of the Catholic Church, unexpectedly won election last April. Conservatives have never enjoyed majority popular support in Ecuador, and they only win elections because of discord on the left. Lasso only polled 20 percent of the vote in the first-round election, which remains an approximation of his base of support.

The 2021 election was Lasso’s third attempt at Ecuador’s top office, and he only won because of deep divisions between the country’s powerful social movements and adherents of the former left-populist president Rafael Correa. Further complicating Lasso’s fortunes are persistent tensions with Ecuador’s traditional right-wing Social Christian Party (PSC), which helped him win election but which he quickly alienated once in office.

Lasso has prioritized safeguarding the interests of big business and banking, further deepening inequality gaps. After a year in office, the only campaign promise that he has fulfilled was a Covid-19 vaccination campaign.

From the beginning, it was readily apparent that Lasso would face a tough battle in advancing his conservative agenda. He lacked natural allies in the parliament, with his right-wing Movimiento CREO (Creating Opportunities) winning only 12 seats in the 137-member National Assembly. This forced him in a purely opportunistic alliance with Pachakutik that was problematic from the start.

Pachakutik is a center-left party closely allied with Indigenous movements. It forms the second largest block in congress with 27 seats. The largest party is Correa’s left-wing Union of Hope (UNES) with 49 seats.

As part of their agreement, CREO supported Pachakutik’s nominee, Guadalupe Llori, to head the National Assembly. Despite being elected to the post for two years, Llori was ousted in a vote of no confidence after barely completing her first year.

For months Llori had faced challenges from the radical wing of Pachakutik, who opposed her willingness to work with Lasso in passing regressive tax policies and other economic measures. Some had called for deputies who cooperated with the Lasso administration to face Indigenous justice. Llori’s dismissal on June 1, 2022 was a blow to Lasso being able to advance his legislative agenda.

Lasso’s initial honeymoon period in office was very short lived. His popularity ratings have tumbled from an initial high of 68 percent to about 20 percent currently, with his disapproval rating at 80 percent. In the face of significant and sustained protests, serious questions remain as to how long he can hold on to power.