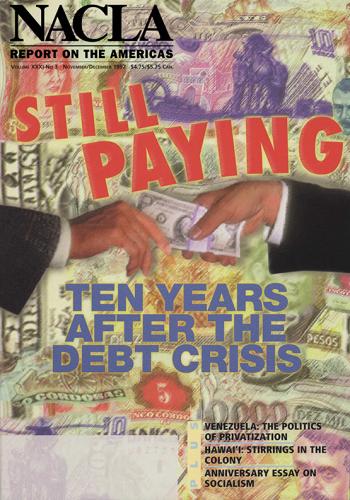 This summer, over 2000 activists, politicians and policymakers gathered in Caracas with the aim of reinserting the debt back in the debate if Latin American development. Back in the 1980s, in the wake of Mexico's six-month debt moratorium of 1982-1983 and the subsequent rescheduling of most of the region's foreign debt, all discussions of Latin American development required some consideration of the "debt crisis." The serious possibilities that several major Latin American countries might soon be unable to service their foreign debts exposed the extreme fragility of international debt structures and hung a dark cloud over the futures of North and South alike. From everyone's point of view, the unsustainability of the debt constituted a "crisis." As the subsequent articles in this Report illustrate, the continuing debt obligations of Latin American countries have come to be regarded simply as data-necessary facts of life for debt-driven, transnational, (neo)liberalized economies.