The Institutionalization of Anti-Haitianism in Dominican History and Education

Recent acts of anti-Haitian violence and discrimination are not isolated events, but part of a long history of anti-Blackness in the Dominican Republic. 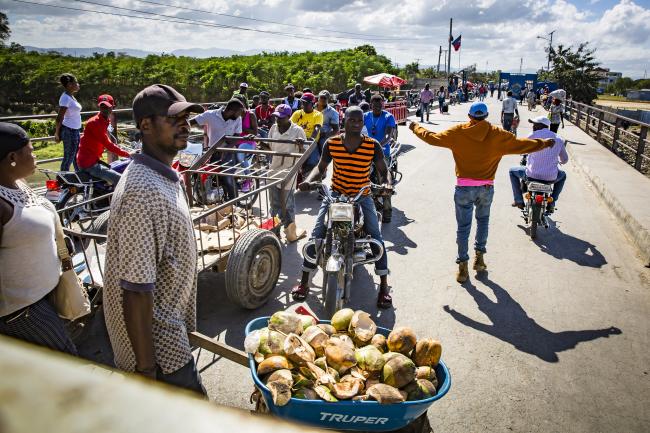 The Dominican Republic deported over 108,000 Haitians in 2022. These numbers will likely go up in 2023. In November, the president of the Dominican Republic, Luis Abinader, ramped up his deportation efforts of Haitians with Decree 668-22, enabling a series of anti-Haitian measures to arrest and “repatriate” thousands of Haitians to “preserve national security and public order.”

As a result of this mass deportation, numerous videos circulated on social media in the United States showing human rights violations of Haitians by Dominican authorities. Footage of Haitian people being dragged out of their homes and beaten, families watching their informal homes bulldozed, and a woman giving birth outside of a hospital where she was refused care, among many others, have provoked outrage by some and a defense of the Dominican government by others.

I was horrified to see that this was happening in the country of my birth. I took my indignation to social media where I was met with support by those who opposed what they saw as cultural genocide as well as resistance from Dominicans who defended Abinader’s right to protect the country's borders.

Many Abinader sympathizers seemed immune to the videos I was watching, impervious to the fundamental humanity of Haitian people. Almost all of them reverted to nation-making histories of the Dominican Republic: the history of Spanish colonization in the eastern part of the ​Hispaniola and French in the west, the Haitian Revolution, the short-lived 1821 independence of the Dominican Republic from Spain,​ the consequent 22-year unification (or what many Dominicans call invasion) of the island, and the Dominican independence of 1865. Many also argued that like other sovereign nations—and specifically citing the U.S. policy of deporting immigrants—the Dominican Republic has the right to oust migrants whom authorities believe have entered the country illegally. These nation-reifying narratives of Haitian threat and invasion, I noticed, often functioned as points of rhetorical departure for anti-Haitian logic and disregard for Haitian human rights.

The recent inhumane acts of anti-Haitian violence captured in the videos circulated on social media should not be seen as isolated events of anti-Black racism. Anti-Haitian sentiment and discrimination, coupled with anti-Blackness, have saturated many levels of Dominican history and education. The narrative that Dominican national identity is defined in opposition to all things Haitian—that is, Dominican history as always in opposition to Haitian humanity and existence—has contributed to what I call the institutionalization of anti-Haitianism in the Dominican Republic and elsewhere.

The 240-mile border shared between the Dominican Republic and Haiti has always been a porous, bicultural space. It is a transnational frontier and a meeting ground for differences, where Dominicans and Haitians have historically intermarried and procreated regularly, uniting their cultural identities. The border was legally undefined for over one hundred years until the finalization of the Dominican-Haitian border in 1936 by the Trujillo regime.

The racial logics of the Dominican Republic have a long colonial history dating back to the earliest conquest and enslavement of Arawakan Taínos and Africans on the island, which created a complex, Catholic-inspired caste system of colorism that extended all over Latin America. Although the racist ideology about Haitians formed over centuries, the modernization of anti-Haitianism on the island commenced with 20th-century dictator Rafael Leonidas Trujillo, who envisioned the Dominican Republic as a distinctly Spanish, Catholic, and non-Black nation.

As the first free Black nation in the western hemisphere, Haiti’s cultural practices of Kreyòl language and African-inspired religion and spirituality (like the Pan-African Vodou) were seen as threats to Trujillo’s white supremacist dream of the Dominican Republic. Trujillo’s mono-ethnic vision of Dominicans peaked during the official creation of the Haiti-Dominican border and the state-sanctioned, genocidal massacre of tens of thousands of Haitians living in the Dominican Republic in 1937.

Trujillo sought to turn Haitians into the official enemy of the Dominican state. The slaughter became known as the “Parsley Massacre” because of the regime’s cruel way of distinguishing Afro-Dominicans from Haitians. When Dominican soldiers confronted Black people along the border of Haiti, they held up a sprig of parsley and asked them to name it. “If the person responded by trilling the 'r' in perejil (Spanish for parsley)," NPR recounts, "he would be free to go. Anyone who didn’t trill the 'r' was thought to be a Haitian Creole speaker—and was likely to be killed.”

After the massacre, Trujillo was criticized by the Unites States and the Organization of American States (OAS). His defense for the massacre was border protection, defending the rights and property of Dominican farmers living on the Dominican-Haitian border. These events launched a wave of anti-Haitian violence that is still being felt today.

Dominican Republic’s Spanish heritage was an important component of Trujillo-era education, which focused on Christopher Columbus’s arrival on the island in 1492, Dominican independence from Haiti and Spain, and the establishment of the first university, hospital, and church in the western hemisphere. During the regime’s 31-year control, Trujillo built hundreds of primary schools specifically in rural and border towns. Many of these schools were named after state-approved figures like Francisco del Rosario Sánchez, Juan Pablo Duarte, and Matías Ramón Mella to reify a nationalistic view of Dominican history. According to Trujillo’s Organic Law of Education, “The content of the education given by the Dominican school will be in the principles of Christian civilization and Hispanic tradition that are fundamental in the formation of our historical physiognomy.” Teaching students to read and write in Spanish, these schools were designed to transform the border into a monolingual region that was disassociated from Haitian cultural norms. In more ways than one, Trujillo-era education sought to create model Dominican citizens indoctrinated in the exploitation and nationalistic resentment of Haitians.

Trujillo’s assassination in 1961 by a CIA-supported Dominican opposition group did not remove the inculcated education of anti-Haitianism. In fact, there was little effort by the subsequent governments to rid the nation of anti-Black and anti-Haitian logics and histories. The rule of caudillo Joaquín Balaguer over a combined 20 years marked an ideological continuation of the Trujillo regime. As Silvio Torres-Saillant argues: “The governments that followed Balaguer, though led by the liberal parties Partido Revolucionario Dominicano (PRD) and Partido de la Liberación Dominicana (PLD), did not launch a national education project meant to de-Trujilloize Dominican society by dismantling the cultural logic of the poisonous dictatorship. Political expediency prevented them.”

Unfortunately, not de-Trujilloizing Dominican society meant that anti-Haitian sentiment outlived the dictatorship, remaining solidly entrenched in Dominican life for generations. For example, the legacy of Trujillo era history and education can be seen in the country's rabid ultranationalists and high-ranking officials in the government who seldomly if ever indict anti-Haitian hate speech.

Eighty-five years have passed since the 1937 massacre, and the Dominican government has been reluctant to accept the legacy of this horrific moment and the country’s moral responsibility for this crime against humanity. Instead, politicians manipulate anti-Haitian rhetoric to scapegoat and deport Haitians.

For Dominicans to grapple with institutionalized ant​i​-Haitianism, we need to dismantle fascist and white supremacist histories of nation-making that calcified during the Trujillo era. Indeed, as Torres-Saillant claims, we must de-Trujilloize in order to envision more just futures for Hispaniola. This process begins with teaching histories that explore and celebrate Dominican-Haitian cultural affinities: our Taíno-Arawakan beginnings, our anti-colonial efforts, our fight for abolitionism, and our rich resilience as one people on one island.

Ayendy Bonifacio was born in Santiago de los Caballeros, Dominican Republic and raised in East New York, Brooklyn. He earned his PhD from the Ohio State University and is currently an assistant professor of English at The University of Toledo. His book Paratextuality in Anglophone and Hispanophone Poems in the U.S. Press, 1855-1901 is forthcoming.