With the recent revelation that President Hugo Chávez underwent emergency surgery to remove a cancerous tumor during a visit to Cuba in mid June, an explosion in political speculation has been swirling through the streets of Venezuela and catching fire around the world.

With the recent revelation that President Hugo Chávez underwent emergency surgery to remove a cancerous tumor during a visit to Cuba in mid June, an explosion in political speculation has been swirling through the streets of Venezuela and catching fire around the world.

Hugo Chávez after chemotherapy (AP/Fernando Llano)International media conglomerates—with conservative anti-Castro groups in Florida in the lead—have jumped on this latest wave of speculation, forecasting the demise of the left-wing leader in the run up to next year’s presidential elections.

With outlandish predictions of a post-Chávez era, based more on their frustration with Fidel Castro’s 85th birthday than on the Venezuelan president’s medical condition, right-wing Miamians continue to direct their unremitting hatred toward any Latin American government that breaks with their free-market mentality.

Perhaps ironically, all of these pretensions and exaggerations have occurred before the backdrop of one of Venezuela’s most important historical celebrations—the bicentennial anniversary of its independence from Spain on July 5.

Nevertheless one would be hard pressed to find any substantial media coverage of this historic date. Another significant event that was also overlooked was the founding summit of a new organization for regional alliance, the Community of Latin American States (CELAC), which was scheduled to take place on Margarita Island following the bicentennial celebrations.

The first meeting of CELAC was postponed due to Hugo Chávez’s medical recovery and rescheduled for December 9 in Caracas. Preparations for the event are underway with sub-meetings taking place between regional Foreign Ministers and other high officials.

Although CELAC may not be as sexy to mainstream media as Chavez’s chemo-induced baldness, the creation of this alliance represents yet another definitive step away from Washington’s hegemonic influence in the Americas and strengthens multilateralism between countries that share a similar history and present.

In this way, CELAC builds upon the unifying dream of South American independence hero Simon Bolívar, who in his Carta de Jamaica of 1815 famously proposed a single government to unite Hispanoamérica.

Although not as lofty an initiative as Bolivar’s Gran Colombia, CELAC is an important step in establishing something unparalleled in the Western Hemisphere—an official organization with more than 30 member countries that excludes both the United States and Canada. 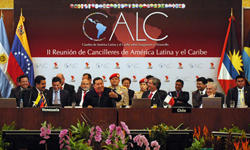 Foreign ministers in April (credit: Ismael Batista)This alliance is being built explicitly, at least from the Venezuelan perspective, with the intention of counterbalancing the Organization of American States, an organization that, despite the assertions of some conservative members of the U.S. Congress, has a strong track record of acting on behalf of the interests of the United States.

The new regional block will expand upon other recent integrationist initiatives including UNASUR, Mercosur, Petrocaribe, and ALBA in constructing an alternative framework for economic, social, and political cooperation between Latin American governments.

Basic issues such as sustainable development, the fight against poverty and drug trafficking, respect for national sovereignty and human rights, and interregional conflict resolution are at the core of CELAC’s agenda. The extent to which the new organization will find common ground on gritty economic questions remains to be seen, however.

While undergoing major political shifts over the past decade, the region is still home to a handful of conservative governments, such as in Chile and Colombia, which continue to prioritize free trade agreements with the United States. Brazil, Latin America’s most powerful economic player, frequently oscillates between market-oriented policies and welfare state initiatives while countries such as Ecuador, Venezuela, Bolivia, and Cuba remain firm in their rejection of neoliberalism.

Despite these differences, the important thing is that the door to dialogue is being opened and the United States is being left outside. Such audacity would not have been imagined 20 years ago in a region that has been under the thumb of U.S. dominance for more than a century.

CELAC is therefore not only a testament to the weakening of Washington’s influence in the region, but also to the strengthening of Latin America’s identity and its movement toward a second independence. This is the real significance of Venezuela’s recent bicentennial celebrations—a point predictably missed by a press that prefers to feed the hysteria of speculation rather than report on the realities of contemporary Latin America.

Edward Ellis is a Venezuela-based filmmaker and journalist. Born in Buffalo, NY, he studied anthropology at SUNY College at Buffalo and the London School of Economics. Ellis recently completed his first feature length documentary, Tierras Libres, addressing Venezuela's agrarian reform and the assassination of landless farmers. NACLA published a review of his documentary in the latest NACLA Report on the Americas, Cuba: Salvaging a Revolution?