On December 9, Santos decreed Law 4635, ostensibly creating the means for the Colombian government to compensate and assist Afro-Colombian victims that have been kicked off their land. However Santos failed to consult Afro-Colombians prior to the decree—a right protected in the constitution. Without such consultation this is just another piece of legislation that has made a mockery of the rights of Afro-descendants.

President Juan Manuel Santos may have spoiled an historic opportunity to bring some justice in the form of reparations and land restitution to the Afro-descendant victims of Colombia’s internal armed conflict. On December 9, Santos decreed Law 4635, ostensibly creating the means for the Colombian government to compensate and assist Afro-Colombian victims that have been kicked off their land or have suffered during Colombia’s internal conflict. Such a law is essential, as Afro-Colombians have been disproportionably victimized and dispossessed by the violence. Their communities have repeatedly endured forced internal displacement, dozens of massacres, targeted assassination of their leaders, rape of their women and children, and the stigmatization that comes with all these atrocities. However, the Colombian government failed to implement a legitimate process of participation and free, prior, and informed consultation with these groups over the law—a right granted to Afro-descendents both in the Colombian Constitution and in international treaties. Without such consultation with the victims, Law 4635 is just another piece of legislation that has made a mockery of the rights of Afro-descendants. 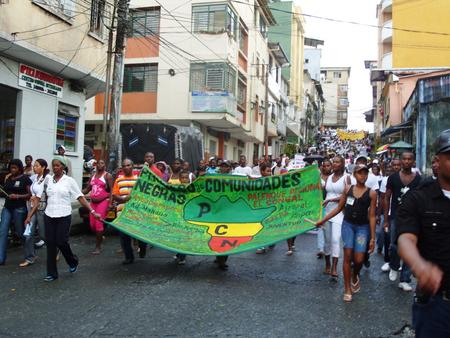 Proceso de Comunidades Negras march against threats to their territory in 2007 (credit: PCN)

The prior, free and informed consultation and consent is a right granted to indigenous and Afro-descendant peoples under the principle that communities must be consulted and have the right to give or withhold their consent to projects, actions, programs, legislations, and initiatives intended to be implemented on their territories. Under this right, communities must participate in decision-making processes and legitimate negotiations before any decision is made. The government is obligated to provide adequate, accurate, and timely information. To respect their right to participate and decide should be the first gesture of good faith and political will of the government.

This issue caused disagreements within government entities and sparked outcry from Afro-descendant grassroots organizations. The government’s disregard for the law and disrespect for Colombia’s Afro-descendants’ fundamental right to free, prior, and informed consultation and consent has seriously undermined the individual and collective rights of the Afro-descendants in the past, and will have serious implications at the time of reparation and restitution for the material and cultural losses of the victims. With this law, the Colombian congress has passed legislation, policies, and programs that endanger Afro-Colombian lands, violating these people’s right to determine what they want and how, thus consolidating a plan of perpetual dependency on the state and the disenfranchisement of Black people. As it stands, the Afro-descendant victims may never see true justice.

The Victims Law has been marketed to the United States and to national and international human rights communities as a sign of Santos’s good will toward the victims of the internal armed conflict and his commitment to bring peace to the country. The U.S. government has given tremendous support to Santos by providing substantial financial and technical aid to the process. As has happened with all U.S. foreign aid toward Colombia, the U.S. government let human rights violations pass under the guise of the Colombian government’s “good efforts.” The truth is that the Colombian government has failed to comply with human rights and international humanitarian law and therefore has failed the most affected and vulnerable of its citizens, which in this case are the Afro-descendant victims.

Sadly, it was a chore just to have Afro-descendent victims recognized by law. Five months before Santos’s December Law Decree, on June 10, the Colombian congress passed Law 1448 to assist and compensate the victims of the internal armed conflict. However, the government inexplicably excluded Afro-descendants and indigenous peoples from the law. In an attempt to rectify the unconstitutional act of ignoring these communities, congress gave Santos the special power to enact the December Law Decree after an effective process of free, prior, and informed consultation with Black, Afro-Colombian, Raizal and Palenque communities—a process that the government never carried out.

The issue with the victims’ law is only one of many examples of how the Colombian government treats Afro-descendants as second-class citizens. In 1991, when the Colombian Constitution was amended with a commitment to “recognize and protect the ethnic and cultural diversity of the Colombian nation,” the recognition of the special ethnic and cultural status of Afro-descendants was relegated to a “provisional” article that required additional information and legislation to be implemented, a requirement that did not apply to our indigenous brothers and sisters.1 Moreover, while the Constitution protected indigenous peoples’ rights to their ancestral lands, the provisional article recognized that Afro-descendants only have rights to so-called “vacant lands.” Many governments have used this racist ploy to undermine the identities of Afro-descendant communities and their right to land, even though these communities have existed on their lands for centuries.

A graphic example is in the Northern Cauca region, where the government refused to recognize the Afro-descendant La Toma Community Council because it stated that “there was not a Black population” in that area. It completely ignored the fact that the communities’ African ancestors had bought those lands in 1636 with gold they mined themselves to settle as free communities. Denying the existence of Afro-descendants in the area, from 2000 to 2009 the government granted mining concessions to foreigners and multinationals, putting the communities, their leaders, and their territorial rights at risk. As has been made evident by human rights organizations, the Community Council leaders of La Toma have been facing death threats for the last three years as they have fought to protect their rights to their ancestral lands.

The case of the peace communities of Jiguamiando and Curvarado in the Choco department also exemplifies the ploy against the rights of Afro-descendants. In February 1997 four thousand people were forced to flea their collective lands after they were terrorized by a counter-insurgency military operation known as “Operation Genesis,” carried out in collusion with right-wing paramilitaries against the Revolutionary Armed Forces of Colombia (FARC). The resilient communities decided to fight for their territorial rights. In late 1999, when the communities returned to recuperate the more than 35,000 hectares of their land, they found that it had been fraudulently acquired by companies linked to paramilitaries and were ridden with oil palm crops. As a result of their fight for legitimacy, these communities have faced almost 14 years of death threats and persecution by government and armed groups. Hundreds of community members and leaders have been assassinated. Still the communities have been unable to enjoy a peaceful return to their collective territories. Although in March 2011 the government finally granted 25,000 hectares to these victims, it didn't offer them any assistance to the communities to clear the lands of oil palm monocrops and to re-establish themselves under safe economic and physical conditions. Paramilitary groups continue to harass the communities and leaders, despite the knowledge of local and national authorities.

In 2004 the Colombian Constitutional Court ruled that the condition of more than a million internally displaced Afro-descendants was unconstitutional. It mandated that the government define and implement measures to address the issue. However due to the failure of then Colombian president Álvaro Uribe (whose Defense Minister was current president Juan Manuel Santos) to abide by the ruling, the Court issued Order 005 in 2009, establishing a deadline for the government to take the proper measurements to assist, protect, and prevent the vulnerable Afro-Colombian communities from further internal displacement. The court also ordered the Colombian government to address all causes for the drastic human rights situation and internal displacement of Afro-descendant communities, including the impact of the internal armed conflict, the effects of domestic and foreign policies, and the systemic racism and discrimination against the Black population.

Nor the Uribe or Santos governments have complied with the court orders. Grassroots organizations and communities have reported on numerous occasions the lack of respect for their right to free, prior, and informed consultation and consent, and have had to pursue legal actions to pressure the government to comply with the law.

The formulation of the congressionally-approved National Developmental Plan of 2010-2014 offered an important opportunity for the Santos administration to correct the systemic marginalization of Afro-descendants by investing in Afro-Colombian communities. Unfortunately its approval also violated the communities’ right to decide on issues critical to their development and advancement, since the plan targets the extractive and agricultural industries that would lead to greater pressure on Afro-Colombian lands. Once more, Colombia failed to adhere to its constitutional mandate ensuring minorities free, prior and informed consultation and consent.

Law Decree 4635 is yet another in a chain of government actions intended meant to maintain Afro-descendants as second-class citizens. For the Colombian government, justice and integral reparations are a matter of the state’s good will, not immanent conditions for the fulfillment of the human rights of Afro-descendents.

The state’s commitment to protect ethnic groups and their rights is just government rhetoric. The right to free, prior, and informed consultation and consent is the Afro-descendants’ most valuable tool in their struggle for self-determination and autonomy. This right cannot be given up under any circumstances. The government claims to offer good will, but instead it has been the tenacity of proud self-recognized Black people that has positively transformed what otherwise has been a manifestation of the discriminatory and racist character of the Colombian government.

Paraphrasing the Uruguayan writer Eduardo Galeano, “Nos quitaron la justicia y nos dejaron la ley” (they took justice away from us and left us the law). This is Colombia, a country of many laws but little justice.

Charo Mina-Rojas is an activist, and a member of the Proceso de Comunidades Negras en Colombia (PCN), and the Afro-Colombian Solidarity Network (ACSN).