William Brownfield, U.S. assistant secretary of state for the Bureau of International Narcotics and Law Enforcement Affairs (INL), toured Central America last week to quell the growing opposition to U.S. drug war policies that have failed to reduce demand for drugs in the United States or disrupt supply routes from producer countries.

Despite growing calls for alternative strategies to combat the flow of drugs through Central America, William Brownfield, U.S. assistant secretary of state for the Bureau of International Narcotics and Law Enforcement Affairs (INL), toured the region last week to promote more of the same: supply-side programs for drug interdiction. The INL, whose budget exceeds $2.5 billion, focuses on destabilizing foreign suppliers of illegal drugs and is the State Department's key agency in fighting the drug war.

The thrust of Brownfield’s visit seemed to be to quell the growing regional opposition to U.S. drug war policies that have failed to reduce demand for drugs in the United States or disrupt supply routes from producer countries. 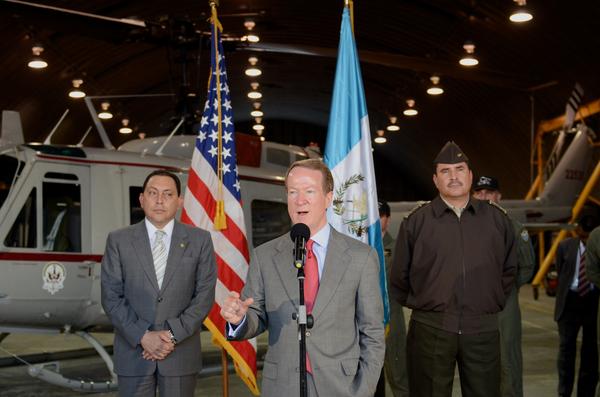 Brownfield with Guatemalan Defense and Interior Ministers at a Guatemalan Air Force hangar. (credit: state.gov)Foremost among the proponents of a change in drug war strategy has been Guatemalan president Otto Pérez Molina. After winning the November 2011 presidential elections on a tough-on-crime platform, in January Pérez Molina called for the decriminalization of the transportation, consumption, and production of drugs. On February 14, El Salvador president Mauricio Funes said that he was open to discussing the issue. On February 29, Costa Rica president Laura Chinchilla urged Central America leaders to meet about the proposal.

Several other leaders throughout Latin America have questioned U.S. drug war strategies in recent years. The United States remains the world's largest market for illegal drug consumption, and trafficking organizations remain powerful with the capabilities to shift drug routes in response to interdiction efforts. Meanwhile, the peoples of the region continue to suffer the effects of the failed U.S. approach to the drug war, including displacement, increased heavy-handed policing measures, and countless deaths.

During his trip, Brownfield was outspoken against the decriminalization of drugs.

"In America we have analyzed this concept and agree that it's no good, that it does not work, not for moral, psychological, health and crime reasons," he said at a press conference in Honduras.

Brownfield cemented the message that supply-side drug war strategies aren’t up for debate among U.S. officials by announcing that a batch of U.S. helicopters will be delivered to drug-trafficking zones in the coming weeks. The helicopters will be used in Operation Hammer, a militarized interdiction effort in waters along the Caribbean and Pacific coasts of the isthmus, involving U.S. Southern Command and forces from 12 other countries. The effort began in January.

The operation is intended to cut off coastal drug transport. Douglas Fraser, commander of U.S. Southern Command, has said that 80% of the cocaine that reaches the United States has traveled along the coast of Central America.

“We intend to terminate [traffickers’] operations by limiting their ability to use Central America as a transit zone,” Fraser said.

Brownfield’s INL has no jurisdiction over the military, but it, too, is participating in aerial interdiction efforts. Brownfield wrapped up his visit at a Guatemalan Air Force hangar, which houses six INL helicopters used for drug interdiction.

The prospects for changes to the drug war are now dimming, with waning support for Pérez Molina's proposal. On Saturday, March 24, the day before Brownfield arrived in Honduras, Pérez Molina hosted a regional summit on legalization that was attended by only Costa Rican president Chinchilla and Panama’s Ricardo Martinelli. Pérez Molina said that U.S. pressure led to the other leaders’ absence from the regional conference.

On March 31, Funes firmly switched from his original position on the topic, issuing a joint statement against legalization with Honduran president Porfirio Lobo and Nicaraguan president Daniel Ortega, both of who had already expressed opposition to Pérez Molina’s proposal. The United States has effectively pressured the Funes administration before, forcing the ouster of leftist members of the Security Ministry in November.

Legalization and decriminalization have been placed on the agenda for the upcoming Summit of the Americas on April 14 and 15, in Cartagena, Colombia, but, for now, the tide may have turned against any substantial changes to drug war policies.

Allen Hines is a researcher with the Committee in Solidarity with the People of El Salvador. See also the Spring 2012 NACLA Report on the Americas, "Central America: Legacies of War."