It has been a year since Uruguay passed an affirmative action law to help repair its historical racism. But where do Afro-Uruguayans stand today? 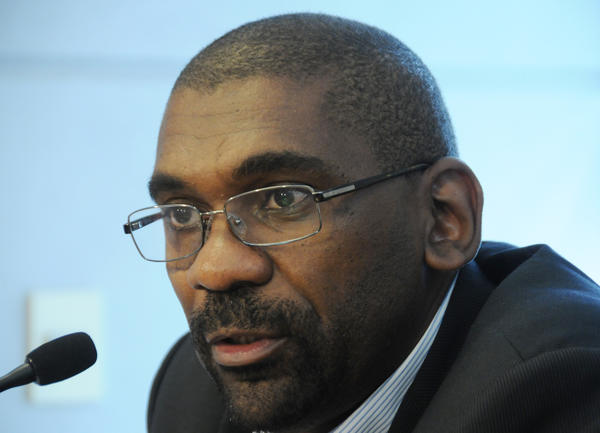 Edgardo Ortuño, the first Afro-descendant to be elected to Congress in Uruguay in 2006 (Consejo de Ministros/presidencia.gub.uy)

At the end of 2013, the Frente Amplio (Broad Front), the coalition currently in power in Uruguay, celebrated its many legislative achievements of the year, which included the globally-admired programs such as the legalization of certain categories of abortion, marriage equality, and marijuana regulation. Members of the political party also touted the law on affirmative action, a measure requiring government quotas and scholarships for Afro-Uruguayans.

This legislative achievement, though, has gone largely unnoticed within the country and in the international press. Since both the Chamber of Deputies and the Senate passed the bill a year ago, in August 2013, the implementation of the law has been incredibly slow. While these affirmative action programs are a positive step toward addressing the historical discrimination against Afro-Uruguayans in the country, the real test will reside in how effectively the government can apply its principles.

The roots of the affirmative action law stemmed from the increasingly accepted idea that Afro-Uruguayans are Uruguay’s “most underserved constituency,” according to Romero Jorge Rodríguez, who works in Uruguay’s Ministry of Foreign Affairs and has written extensively on race in Uruguay.

For much of Uruguay’s history, the state has turned a blind eye to this fact, perpetuating cycles of discrimination. Uruguay endorsed a myth of racial homogeneity that advanced the interests of Uruguay’s large European immigrant population, while ignoring both the indigenous and Afro-descendants within its borders. While almost all of the country’s native population was eliminated in the early 1800s as a result of extermination campaigns and rampant diseases, Afro-Uruguayans have been actively marginalized ever since the first slaves landed in the country’s ports. Over the years, Afro-Uruguayans have been continually pushed to the sidelines of society, both socially and politically, with the lack of access to the highest reaches of government and business in the country, and geographically, like during the nation’s dictatorship from 1973 to 1985, when Afro-Uruguayans were forcibly removed from their neighborhoods in the center of Montevideo and displaced to the outskirts of the city. These measures created over a century of invisibility, which was furthered by a mistaken belief that Afro-Uruguayans made up only a tiny margin of the nation’s population.

This far-reaching invisibility slowly began to erode in 2006 when Edgardo Ortuño became the first Afro-descendent elected to Congress in the nation’s history. In office, he worked with a vibrant group of activists to shine a light on the history and culture of a long-denied population. For example, he helped establish a “National Day of Candombe, Afro-Uruguayan Culture, and Racial Equality,” that he believed could be similar to Martin Luther King Day in the United States or the Brazilian Black Consciousness Day. Since 2006, Uruguayans have celebrated December 3 with parades, lectures, shows, and candombe all over Montevideo, bringing a new and much-needed level of prominence to Afro-Uruguayan culture.

Ortuño’s efforts, along with massive support from Afro-Uruguayan artists and political advocates, also helped questions of race be included in the 2011 census for the first time, which allowed for a clearer picture of Afro-Uruguayan life to emerge. First, Afro-descendants make up over 8% of the population, a number that is more than double most previous estimates. Second, comprehensive statistics about the nation’s inequality among Afro-Uruguayans developed. While Uruguay has about 12.4% of the population living below the poverty line, Afro-Uruguayans have almost double that number, at 27.2% of the community living in poverty. With economic issues pervasively affecting communities, many children leave school at early ages to begin earning a living. Therefore, almost half of Afro-Uruguayans only complete primary school, which is broken down to about 45% of men and 42% of Afro-Uruguayan women. Only 5.7% go on to earn a university or postgraduate degree. However, the cycle of poverty is often reproduced by the lack of education, making it harder to get a decent job and leading to lower wages and higher rates of unemployment—14% of Afro-Uruguayans are unemployed, which is 3 percentage points higher than the overall unemployment rate in Uruguay.

With a clearer idea of the problems facing Afro-Uruguayans, the government has taken steps to begin to address these hurdles, including, and most notably, the affirmative action law. While affirmative action often takes the form of quotas, Uruguay’s law has a multi-pronged approach to address the nation’s problems. First, it mandates teaching about Afro-Uruguayan history, which until now has been completely left out of public schools’ curriculum. Second, it would grant Afro-descendants more scholarships and access to vocational training to help produce higher rates of graduation. Lastly, the law does set up a quota in government employment, requiring that 8% of vacancies be set aside for Afro-Uruguayans, and it also offers tax incentives for private industry to do the same.

The bill passed the House unanimously, with 67 of 67 representatives voting in favor of the law. The first article of the law states that the “the Afro-descendent population that has inhabited this country has historically been the victim of racial discrimination and stigmatization since the time of slave trafficking and the slave trade … this law contributes to making amends for historical discrimination.” Many representatives argued forcibly in favor of measures to address these endemic issues.

Debates in the senate similarly focused on correcting the historical injustice, which acknowledged the structural racism that had been ingrained in Uruguayan society since the slave trade. However, some senators, responding to the fears of opponents of the law, addressed whether positive discrimination might occur in new hiring practices, or whether there might be the potential for the policy to create a stigma around the hiring of Afro-Uruguayans. Despite these reservations, others claimed that doing nothing would be more detrimental. Rodríguez stressed in his testimony before the Senate: “The absence of a policy would itself be a policy,” where the government would continue to endorse preexisting structural discrimination. The argument clearly had force, as the bill passed the senate in August 2013.

Implementation, though, continues to move slowly for a bill that will only be applied for a fifteen-year period. The government presented the decree for the law in June of this year, but the earliest that the law will be granted a budget for implementation will be in 2015, and no scholarship or curricular reform will occur until then either.

Presidential elections in October also threaten the bill. While no candidates are speaking about this bill specifically, both the Colorado and Blanco candidates indicated their intentions to repeal other major pieces of Mujica’s legislative milestones, most notably the regulation of marijuana. Given the low profile of the affirmative action law and other pressing issues, a new government could also threaten the implementation or policies of the affirmative action law.

Beatriz Santos, who is in charge of Montevideo’s Unit on the Rights of Afrodescendientes, has explained though that the law is a positive step forward, by “starting opportunities [for Afro-descendants] that currently do not exist for the collective population, and in turn be a remedy for a whole shameful history of slavery and the scourge of racism.” How thoroughly the law is applied will be a test of the government’s commitment to these principles, regardless of which party ends up in power in early 2015.

Debbie Sharnak is a PhD Candidate at the University of Wisconsin-Madison in History. She is currently a Fulbright Scholar in Uruguay.