A selection of NACLA’s recent coverage of the deep inequality, human rights abuses, and government failures to adequately deliver on the promise of peace undergirding recent protests in Colombia. 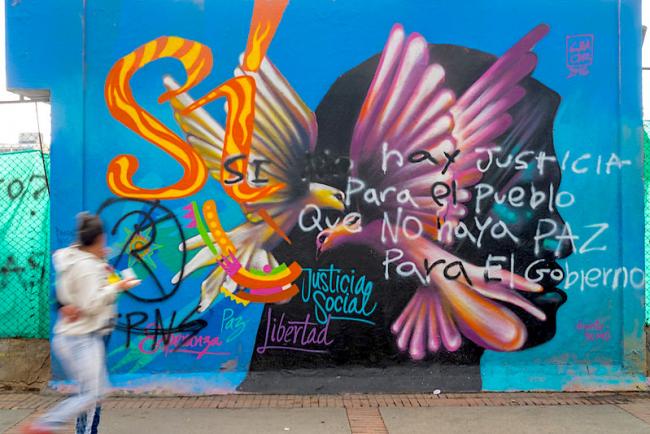 In Colombia, protests continue after unions, social movements, and students called people to the streets for a general strike on November 21 to protest right-wing president Ivan Duque’s “paquetazo,” which includes potential labor and pension reforms. Duque and his cabinet have claimed that calls for protests were based on lies influenced by the domestic and international Left. The day before the protests, Duque deployed the military and closed the border with Venezuela, while the police ransacked artist collectives, activists’ homes, and at least one alternative media outlet. Duque’s failure to recognize people’s demands, coupled with his response to a recent scandal involving the military, further stoked protests, which took to the streets in cities, towns, and rural areas all around the country.

The protests, mostly peaceful, met violent repression by the riot police unit ESMAD, whose agents tear gassed protesters in Plaza Bolivar in Bogotá and struck 18-year old Dilan Cruz with a projectile, killing him. Cruz’s death fueled further outrage over abuses at the hands of state security forces. Days before the original strike, a scandal broke revealing the military killed eight children in an aerial raid in Caquetá. The army covered up the massacre by alleging soldiers had led a successful military operation against FARC dissidents, creating echoes of the “false positives” scandal under former far-right president and Duque ally, Álvaro Uribe. Duque, showing his disconnect with the people, praised the defense minister’s work and service even after he was forced to resign after the truth came out.

To understand the current protests, it is crucial to consider the long history of social inequality and excessive violence that bred and perpetuated the 50-year-long civil war, as well as the paradigm shifts the country has witnessed since the 2016 peace accords. Duque ran on a platform promising to dismantle the peace accords signed by former president Juan Manuel Santos and FARC commanders. The government has not fulfilled promises made in the peace process and violence has been reappearing, with rampant assassinations of Indigenous activists, social leaders, and demobilized FARC members, and what some consider could be a new generation of “false positives.” This has reinvigorated widespread demands for the government to keep its promise of peace. Furthermore, the peace accords have given people more space to protest for social issues such as lack of funding for education, corruption, environmental issues, and gender inequality.

To the dismay of protesters, Duque first met with business leaders before inviting social leaders to join a national dialogue—which so far has fallen short. More than two weeks since the original strike, cacerolazos are still heard every night. This past Sunday, musicians and artists extended unprecedented support by leading another anti-government protest.

This selection NACLA’s recent coverage of Colombian politics and social issues helps contextualize the current protests by shedding light to the government’s effort to dismantle the peace agreements, its negligence towards the conflict’s root causes, as well as the country’s long history of state repression, impunity, socioeconomic inequality, and the ruling elite’s disconnect with Colombian society.