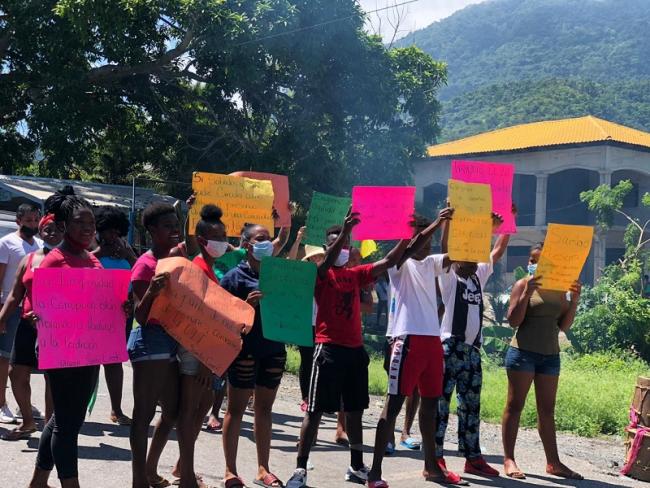 Alberth Sneider Centeno is the first young man, the first cipote, to become president of the Triunfo de la Cruz community board. The 27-year-old is an inspiration to other Garífuna youth living across northern coastal towns in Honduras, says Miriam Miranda, Garífuna leader and member of the Organización Fraternal Negra Hondureña (Black Fraternal Organization of Honduras, Ofraneh).

“He won the respect of community members of all generations,” Miranda says of the beloved Garífuna land defender and father of four, who is also a member of Ofraneh.

Centeno is among the five Garífuna men who were abducted from their homes in Triunfo de la Cruz on July 18, by heavily armed men reportedly wearing police uniforms. Community witnesses say the abductors arrived in Triunfo de la Cruz in three 4x4 vehicles. They broke into their homes and forced the five men into the unmarked vehicles at gunpoint. It was a weekend, and Miranda says residents weren’t allowed to circulate due to a strict coronavirus lockdown. The only entities with free mobility during those times are the police and military, she says.

Garífuna Afro-Indigenous communities like Triunfo de la Cruz dot the Caribbean coast of Honduras, Nicaragua, Guatemala, and Belize. In the case of Honduras, the Garífuna Coast’s vast biodiversity makes the region extremely attractive to destructive foreign investors, who with the help of Honduran elite and corrupt politicians, have for years been appropriating beaches and wetlands for the construction of tourism projects. Garífuna communities along the northern coast of Honduras are also in the path of routes for drug traffickers transporting narcotics to the United States through the Caribbean Coast of Central America.

“The beast is on the loose,” Miranda says referring to Honduran police and military. “Since the coup, police and military have the freedom to do whatever they want.” The 11-year anniversary of the 2009 U.S.-backed coup that pushed out President Manuel Zelaya was commemorated on June 28. 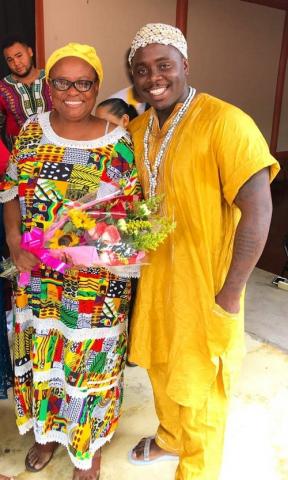 About a week after the five men were taken, Honduran media reported a big plastic bag was found in San Pedro Sula carrying belongings that allegedly belong to some of the men, including Centeno’s alleged passport, cellphones, computers, firearms, and a plastic bag with “unidentified white powder.”

The community is suspicious.

“[The government] is trying to link them to the gangs, to the drug traffickers. The same government, which actually is involved with drug trafficking,” says Carla Garcia, Ofraneh’s international relations coordinator. “The president’s brother is in prison in the United States for drug trafficking, but they don’t talk about that,” she says referring to the October 2019 cocaine trafficking conviction in a New York court of Juan Antonio “Tony” Hernández, the brother of Honduran President Juan Orlando Hernández, who has also been accused of being involved with drug traffickers. “We cannot believe these lies,” she adds.

Protests erupted in Triunfo de la Cruz immediately after the five men’s disappearance. There have been ongoing mobilizations in neighboring Garífuna communities, including Santa Fe, where police reportedly shot at community members during a protest on July 25. Protests also took place in San Pedro Sula and the town of Tela. The familiar chants of “Vivos se los llevaron, vivos los queremos,” (You took them alive, we want them back alive), are echoing throughout the region, demanding the safe return of the five fishermen. International protests include New York City, where on July 20 a group of Garífuna and Honduran people marched from the Honduran consulate to the New York Times building and the United Nations.

The abduction came just weeks after the June murder of Antonio Bernárdez, 71, a Garifuna leader from the Punta Piedra community, who was found dead with bullet wounds and signs of torture after being missing for six days. At least five more Garífuna leaders have been killed since September 2019.

“What happened...is the reflection of systematic persecution and systematic repression, but also a well-crafted plan on behalf of the [Honduran] state to exterminate the Garífuna community,” Miranda says from her home in an undisclosed location in Honduras. Miranda has repeatedly received death threats. “Everything we’ve faced is because we are a community in a permanent fight for our ancestral rights.”

“To us, life is the most important thing,” she says. The community is tired of loss.

Following the 2009 U.S.-backed coup, Honduras became one of the most dangerous countries in the world for Black and Indigenous land and water defenders. Hundreds have been killed, including Lenca Indigenous leader Berta Cáceres, who was assassinated in March 2016 over her years-long fight against the massive Agua Zarca dam on the sacred Gualcarque River in western Honduras. At least two of the seven men sentenced in November 2018 to up to 50 years in prison for Cáceres’ murder were trained by U.S. Army Special Forces.

A new report by Global Witness says Honduras was the most dangerous country per capita in 2019 for environmental defenders. Killings rose from four in 2018 to 14 last year. Ofraneh says at least 17 Garífuna people were killed in 2019. 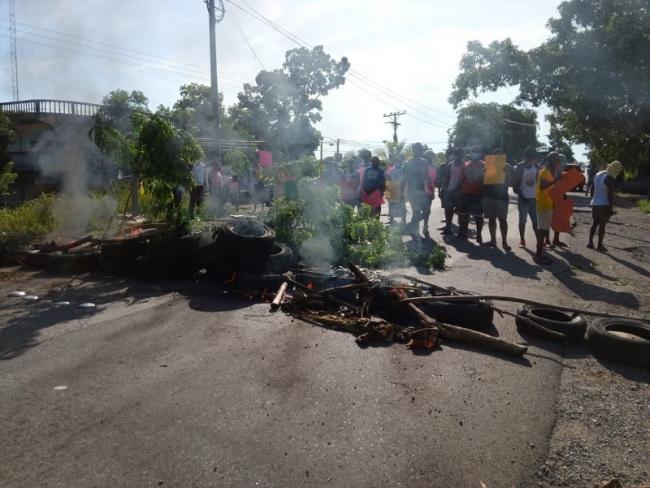 “We’re in a very serious situation, because the state is made up of a corrupt, murderous, criminal political class,” Miranda says. “Not only does that put us more at risk, but it makes this fight very difficult. We’re swimming against the current.”

Miranda says aggressions against the Garífuna community escalated even more after a 2015 Interamerican Commission of Human Rights ruling that declared the Honduran state violated the American Convention on Human Rights by refusing to recognize and respect the autonomy of ancestral Garífuna land and brutalizing the community as it attempted to protect their territory. The ruling demanded the Honduran state expropriate land that had been taken by outsiders for massive tourist projects and return it to its rightful owners, the Garífuna community.

In the years after the ruling, Ofraneh continued to denounce the illegal acquisition of their land predominately by several Canadian companies, according to the Honduran independent radio outlet Radio Progreso. It’s been nearly five years, and the Honduran state still hasn’t complied with the ruling, Miranda says. Instead, it “has activated and coordinates with criminal structures to disappear, persecute, and murder Garifuna leaders as a result,” says a July 27 statement by Ofraneh. Triunfo de la Cruz is one of the disputed communities in the ruling.

Snider Centeno was among the community voices that heavily pressured the state to obey the 2015 court ruling, which would have reversed and halted this destruction. Centeno alongside other community members also often intervened against people involved with the deforestation of mangroves and other highly biodiverse zones in the region, Miranda says.

She looks back on a February meeting with Karla Cuevas, Honduras’s Minister of Human Rights, in which she and Centeno raised their concerns about the ever-increasing violence against the community. During the meeting, Miranda says Centeno also expressed he was worried about his safety. She says he had previously reported being afraid for his life to local authorities, but, Miranda says, they “do not respond to complaints from the Garífuna people.” 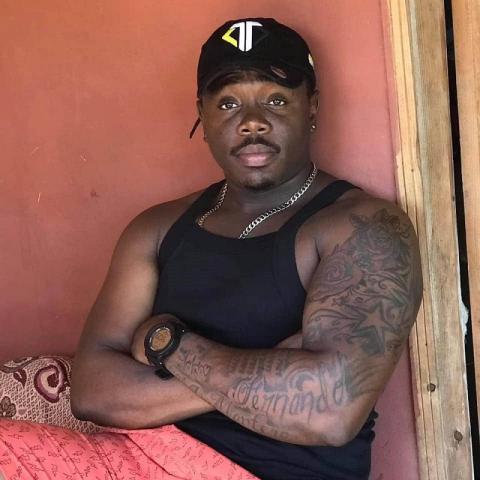 For a moment during the conversation, Miranda looks at peace as she describes some of the community’s traditions and beliefs.

“[We have] very strong roots in fishing. Our region is rich in biodiversity, the ocean. Nature gives us the resources to be able to feed ourselves and survive,” she says. Solidarity and mutual aid are particularly characteristic to her community, Miranda adds, with people often trading foods with each other. It is also common for the local fishermen to return from sea with loads of fish, ready to share with their neighbors.

“We are a community that survives off this mutual aid. This autonomy,” she says. “Every day, this country tries to rob us from the opportunity to make our own decisions.”

One suspect was arrested on July 22 in connection with the five men’s disappearance. As of July 27, Ofraneh had urged local authorities that the individual remain in pre-trial detention as they believe there may be direct evidence in the hands of the Honduran government linking him to the kidnapping.

In a July 28 statement, the Honduran Attorney General’s Office says it repudiates the kidnapping of the five Garífuna leaders and it commits to investigating the attack. The statement also acknowledges the 2015 Interamerican court ruling, saying the state has been working toward compliance but that the coronavirus pandemic has created significant challenges to continue the resolution process.

“Today, and it’s important to say this, because I haven’t told this to anybody. and I’m speaking honestly. Today more than ever my life is in danger,” Miranda says. “It’s a tragedy what we’re experiencing in this country. We’re in this fight for the return of our brothers. We are doing this in the name of life. We demand change. We don’t want to live in terror.”

María Inés Taracena is a journalist from Guatemala currently based in New York City. She's a news producer at the independent media outlet Democracy Now! focusing on Central America, asylum seekers, among other stories. She was previously a reporter in Tucson, Arizona, where she wrote about the immigrant community, the U.S.-Mexico borderlands, education, and homelessness in southern Arizona.