In Belize, a Win for Black Dockworkers 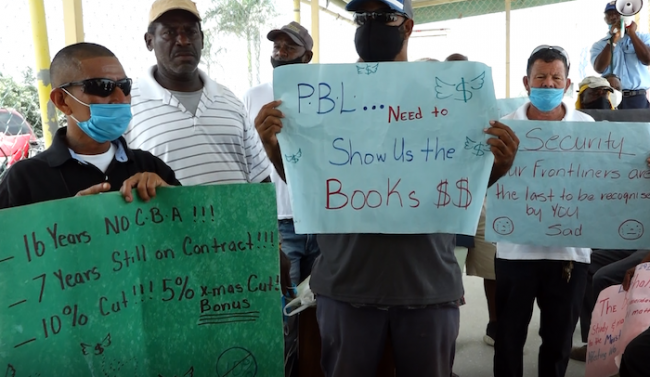 In the sweltering midday sun, dozens of supporters gathered beneath a tarp outside Belize’s main port in the old capital, Belize City, on Friday, March 13, 2020. The rally marked stevedores’ (dockworkers) 12th day of protest. For nearly two weeks, the 150 unionized stevedores employed at Port of Belize Ltd. (PBL) took turns maintaining an around-the-clock presence outside the compound, a fenced-off area where waterfront workers access the ships in port. They demanded transparency around apparent export changes, suspecting Belize’s two large sugar corporations had secretly discussed plans to restructure the industry and relocate the shipment of sugar—Belize’s largest export—to the Big Creek Port, where workers are not unionized. They also wanted to finalize a Collective Bargaining Agreement (CBA) that had needed resolution since a 2004 Memorandum of Understanding provided a temporary fix in the wake of the port’s privatization.

On that Friday, significant support poured in. Representatives from unions across trades rallied in solidarity. Members of the National Trade Union Congress of Belize (NTUCB), an umbrella organization bringing together 10 unions, recognized that the Black workers’ struggle represented every union’s fight. People enthusiastically applauded after each speaker. Union leaders pointed to the stevedores’ strike as part of a broader struggle for dignity, just pay, and respect for Black and marginalized Belizean workers.

“If we do not take the stance that this fight is for all of us…we’re going to go into an economic warfare where the realities that our ancestors escaped from, the realities of slavery, will repeat themselves,” declared NTUCB president Marvin Mora. “If you look at what is happening here today, at the marginalization…of the true grassroots Belizean people, you will realize that this fight is a fight for your survival, for our survival.”

The solidarity affirmed that, beyond their power to halt the economy, the stevedores’ struggle embodied Belize’s long history of racism and exploitation entrenched in the capitalist system, as well as resistance to those conditions. 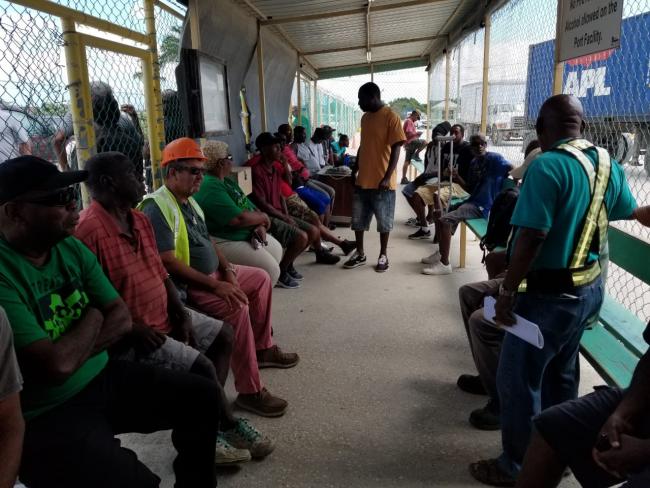 Belize Communications Workers’ Union president Gary Yearwood described going to work on the sugar ships as a teenager as “the only action” in town that provided income for Black men like him from the socioeconomically marginalized Southside, where the port is located. “All we have is each other,” he told the crowd. “We don’t want what is theirs; we just want what is ours.” Elena Smith, president of the Teachers’ Union, echoed the other speakers’ sentiments. “Yes, we need jobs. Yes, we need to feed our families, but we must do so with respect and with dignity,” she said. “Because at the end of the day it takes all of us to bring down any oppressor and all oppressors.”

The stevedores’ March 2020 protest marked a paradigm shift for modern Belizean labor history. In recent years, the only union that galvanized its membership into sustained action was the Teachers’ Union in 2016. Before that, unions showed their strength to challenge a proposed budget and government corruption in 2005. During the years in between, union power was stifled by a common aim of corporations and the government to stew division and raise fears about the consequences of dissent. The stevedores’ protest broke the mold: their strike was partially successful, and their organizing for better working conditions continues.

No Agreement, No Work

Beginning on the morning of March 2, the stevedores, who work in groups commonly referred to as “gangs,” refused to unload the ships at the pier. The protest continued even as, on the third day, a ship owned by the Belize Estate Company—often called the “money ship” because it carries lucrative imports such as sugar—arrived in port. It remained unloaded, forced to carry on its route with the cargo.

On the fourth day of resistance, the stevedores’ bargaining unit, the Christian Workers Union (CWU), issued the required 21-day notice of strike action, and the stevedores returned to work. The notice allowed three weeks to sign a redundancy package—a written agreement outlining that stevedores would be properly compensated for all the years they worked on sugar barges if the sugar exports were indeed moved from PBL to Big Creek Port, located more than 100 miles south of Belize City. The stevedores estimate that if sugar exports were moved south, half of them would lose their jobs and the other half would lose between 35 and 40 percent of their incomes. The CWU informed the port managers that if negotiations broke down because of management, the stevedores would resume industrial action.

Despite returning to work, the stevedores’ protest continued to maintain pressure on management. They swapped the comforts of home for the wooden benches at the entrance of the BPL compound, where they took over a shed. For the first few days, they bought small snacks; then people began donating meals, and cooks stepped in to fry fish with bread, make beans, and barbecue. Soon, a television set arrived, along with board games and cardboard for makeshift beds. Many slept through the raucous gaming and chatter that lasted through the night. 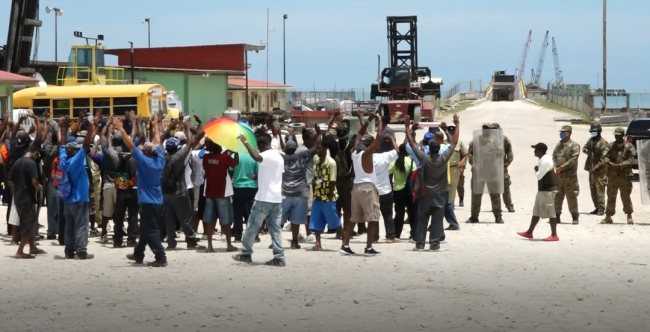 Their watch was cut short when a state of emergency and curfew in response to the coronavirus took effect on April 1. Though negotiations stalled as a result, the stevedores continued offloading imports and loading exports as essential service workers. PBL took advantage of their vulnerability during the pandemic and wanted to cut the work gangs in half, ostensibly as a social distancing measure. But workers thought the move was not in good faith, because according to CWU president Evan “Mose” Hyde, the management had previously been “reluctant to provide masks” requested by stevedores, who are in regular contact with crews arriving from abroad.

As soon as the state of emergency was lifted on June 30, the sister unit of the stevedores, the unionized staff at PBL—which includes port security, heavy equipment operators, mechanics, and office staff—also began protesting over a similarly long-outstanding CBA, 17 years overdue. On July 22—the 101st anniversary of Belizean World War I veterans’ historic 1919 uprising against racism they experienced back home after serving in the British Army—PBL staff joined stevedores in their peaceful protest. They erupted onto the port complex when the company followed through on a threat to terminate 36 staff members. The dismissals callously came via text message. Riot police then fired teargas and rubber bullets at workers sitting on the ground in protest. A PBL press release later claimed that police “only reacted after an assessment of CWU actions escalated to a level of violence.” On July 25, after witnessing and experiencing PBL-sanctioned violence firsthand, the stevedores issued an ultimatum: “No CBA; no work!”

Alindy Marisol Amaya has been working as news editor at KREM Radio and Television, an independent national media outlet in Belize, for over 11 years. She enjoys everything—well, maybe except the unforgiving deadlines—about being a reporter in search of the truth and for the benefit of the people of Belize. She feels at home at KREMANDALA, whose mantra is “Power to the People!”

Julia Thomas is a journalist currently working as a Digital Fellow at Democracy Now! In 2017-2018, she received a Thomas J. Watson Fellowship, during which she studied grassroots media and community-centered reporting alongside journalists in Ecuador, South Africa, Zimbabwe, India, and Nepal. Her work focuses on media, environmental justice, and social movements.