Ending more than a decade of right-wing rule, Xiomara Castro will enter office on January 27 with an agenda strongly shaped by women’s activism and other social movements. 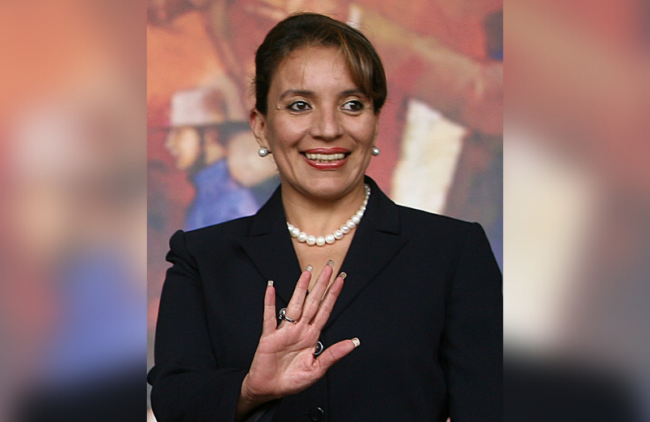 Women have been at the forefront of struggle in Honduras throughout its history, from fighting dictatorships to challenging political corruption to seeking civil improvements such as gender parity in politics and education. The recent presidential election of Xiomara Castro Sarmiento Zelaya of the Libertad and Refundación (Libre) party has exhilarated women from various sectors and in the diaspora. In a country battered by 12 years of impunity, corruption, and aggressive neoliberalism in the wake of the 2009 U.S.-backed coup, Castro’s victory—and her pledge to convene a National Constituent Assembly to rewrite the constitution—is at once a vindication and ray of hope for women’s rights and other hard-fought social struggles.

Speaking with the women in my family about this momentous win, a flurry of stories emerged. My grandmother, for instance, was a Liberal Party activist who opposed the Nationalist Party and served as a poll worker in 1954, a volunteer job that could have resulted in jail time or even death. During this time, treatment of Liberal Party members was akin to the persecution and harassment of members of Communist parties.

For a century, until the 2009 coup, Honduras was ruled alternately by two oligarchic political parties, the Nationalist Party and the Liberal Party. During the 1954 presidential elections, Liberal candidate Ramón Villeda Morales, affectionately called Pajarito Pechito Rojo (little red-chested bird), was seen by supporters as the hope to end the terrible reign of Tiburcio Carías Andino’s Nationalist Party. Although the Communist Party had been founded the same year, the real battle for the presidency was between the Nationalists and Liberals.

Carías Andino, a fierce ally of U.S. banana companies, had ruled as a dictator for 16 years. He used military might to terrorize Liberal Party leaders, crack down on activism or organizing, and threaten workers and campesinos into voting for his party. In 1946, Liberal Party members were gunned down at a rally in San Pedro Sula, sparking much needed organizing and resistance against the regime. In the 1954 election, visibly rigged by the Nationalist Party apparatus, activists had to circumvent the military, intimidation, and corruption to vote. Pajarito won in an upset.

Voting was not easy under Nationalist Party rule, and women had an important role. Less likely to be detained by the military than men, women like my grandmother—with my mother in tow—were tasked with retrieving blank ballots from departmental capitals and distributing them to all the major towns (pueblos), such as my mother’s hometown of San Nicolás de Copán. The women, who did not yet have the right to vote, traveled by trucks that resembled buses and then hiked to San Nicolás up a muddy mountain inaccessible by car. On the way, they had to evade soldiers—known to destroy blank ballots and intimidate or coerce activists and voters—as well as the local priests who sided with the military. En route to the elementary school that served as San Nicolás’s polling station, located across the town plaza from a Catholic Church, my grandmother and her compañeras looped through people’s yards to avoid the military patrols on horseback. These were dangerous and unjust times when the military, empowered by the Nationalist Party, unlawfully raided homes and jailed, disappeared, and killed people.

Once the ballots were safe, my grandmother, cousins, and the other young women positioned themselves at strategic points in the town to wait for villagers from nearby hamlets and help them get to the precinct to vote without facing military coercion. After voting, villagers were offered food in my grandfather’s house and other nearby opposition homes. This irritated the military, and during the 1954 election, soldiers barged into the house and searched it. Later, in the cover of night, my grandparents, their daughters, and children fled the house to hide from the military as the results were declared.

Literate women—a small portion of the population—won suffrage by congressional decree on January 25, 1954, though they did not officially vote in their first election until 1957. For decades after, women have shared stories with younger generations of what life was like under dictatorship, authoritarian regimes, and military rule, when their rights were nonexistent.

The sometimes-violent trading of power between Liberals and Nationalists was the predictable convention until 2009, when Liberal Party members, in collusion with elites and the U.S. State Department, executed a coup against their own party. The putsch removed President Manuel “Mel” Zelaya in very similar fashion to the ousting of Villeda Morales in 1963 after a brief period of democratic rule.

The resistance to the 2009 coup was led by women, who filled the ranks of most social movements. Women have stood on the frontlines to defend ancestral lands and rivers, their rights as educators and healthcare workers, the right to live free of violence, and the right to make choices about their bodies and identities. Women have also been critical in shining light on the role of U.S. intervention in the region and the Cold War-era politics of the internal enemy that sought to disappear and torture students and activists perceived to be communists. These are the memories grandmothers have shared with granddaughters and are now being passed on to millennial activists opposing the regime of outgoing President Juan Orlando Hernández (JOH).

Similar to the determination to make the people’s voices heard at the ballot box in 1954, it is no surprise that Hondurans—especially young people and those most disenfranchised in the 12 years since the coup—voted in unprecedented numbers in the 2021 election. This could be a new Honduras. And as the first woman president, Castro is one part of a larger legacy of women actors and their daughters who made her victory possible.

In her campaign and platform, Castro embraced gender rights and sought to address femicides and structural violence against women and LGBTI communities—issues ignored in previous campaigns. She promises to change the new penal code, approved a few months ago by the Nationalists in Congress, to rectify reduced sentences for crimes against women. She also proposes to counter hate speech and the conservative crusade against so-called “gender ideology,” advocates for sex education in schools as tool to prevent teen pregnancy, and calls for gender parity in politics, where women are underrepresented. 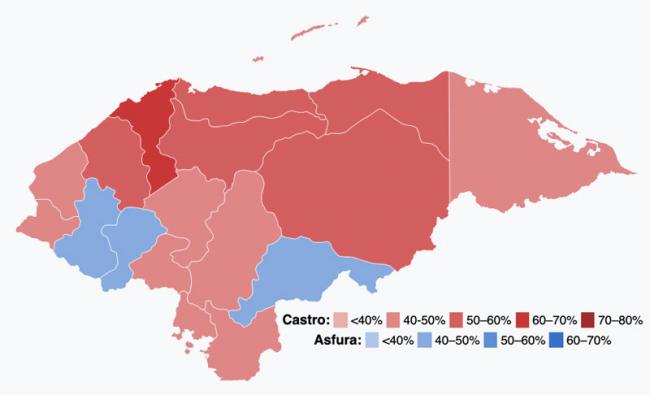 On immigration, Castro calls for a “humanist migration policy” to address forced migration and for a reduction of fees on remittances. In this process, she promises to work both with the U.S. government and the Departamento 19, or immigrants living outside of Honduras. At the same time, she promises to guarantee the rights of Hondurans—including immigrants, regardless of their status—to pensions, social credits, and other benefits that will make it easier for them to return if they choose.

But the most far-reaching policy for women is Castro’s support of the right to sexual and reproductive rights, including the right to choose and access reproductive technologies and contraception methods that respect women’s choice.

Castro’s call for family planning and access to contraception, particularly the “morning after pill” and contraceptive pill, as well as her pledge to decriminalize abortion in cases of rape, threats to the pregnant person’s life, and fetal abnormalities, and her support for sex education represent a large leap from the positions of any previous government. Further proposals promise the recognition of women’s work, support for domestic violence shelters for survivors, and the creation of centers for the reinsertion of deported women into society.

Her plan also features special attention to lesbian, gay, bisexual, trans, and intersex communities, calling for protections against hate crimes and violence, proper investigation of crimes, and introduction of a gender identity law that would allow trans and gender nonconforming people to change their names and genders on their identity documents. These moves—unprecedented in Honduras—would bring the country in line with the recommendations in a recent Inter-American Court of Human Rights ruling that found the Honduran state culpable in the 2009 murder of trans activist Vicky Hernández.

Castro has committed to recognizing ILO Convention 169, which Honduras ratified but never implemented. This would guarantee Garifuna and Indigenous communities’ rights to free, prior and informed consent, allowing them to weigh in and even oppose land development projects on their territories. It would also create opportunities to advance bilingual education and healthcare and other critical demands.

The Garifuna community, in particular, was deeply affected by the reign of the Nationalist Party, which allowed rich landowners to steal communal and ancestral land. Garifuna and Indigenous women have led important land reclamation efforts to counter the displacement that has forced their communities into an exodus. Importantly, in the National Constituent Assembly process, Castro vows to propose the creation of a Congress of Afrodecendant and Indigenous Communities that would have the power to administer autonomous zones. This would be a stark reversal of the controversial ZEDEs law—passed under JOH’s leadership in Congress and expected to be overturned by Castro and the new Congress—that sought to auction off public land to foreigners to create enclaves tantamount to private cities. It would also deliver on a key demand of the post-coup resistance: redrafting of the constitution to refound Honduras while including those most disenfranchised historically. In other words, including those who built the social movements that brought Castro to power.

Castro may confront the wrath of the right wing, conservative elites, organized religion, and other patriarchal forces in Congress and in sectors aligned with U.S. interests. The key challenge is how to go from vision to actual policies that will materialize in people’s lives. Castro will need to involve the Afrodecendant, Indigenous, feminist, and LGBTI social movements in this process as a first step to ensure its success and ample popular support.

Many who protect the land, rivers, and ancestral territories are women. When their families are targeted, the entire community is affected. The JOH administration relentlessly persecuted these community members. In fact, during the bicentenary celebration of Honduran Independence from Spain, he declared water and land defenders, feminists, and LGBTI communities “enemies of Independence.”

Of course, it was JOH and his Nationalist Party that proved to be the enemies of the people. Now, 67 years after women won the right to vote, Xiomara Castro Sarmiento Zelaya is promising to be a president of the people and to restore Honduras’s constitutionality and rule of law. It promises to be a new era for women, of all races and ethnicities, and LGBTI communities. I am excited and hopeful. So is my mom. My grandmother would have been, too.

Suyapa Portillo Villeda is associate professor at Pitzer College and author of Roots of Resistance: A Story of Gender, Race, and Labor on the North Coast of Honduras, which focuses on the working-class culture of resistance in Honduras.