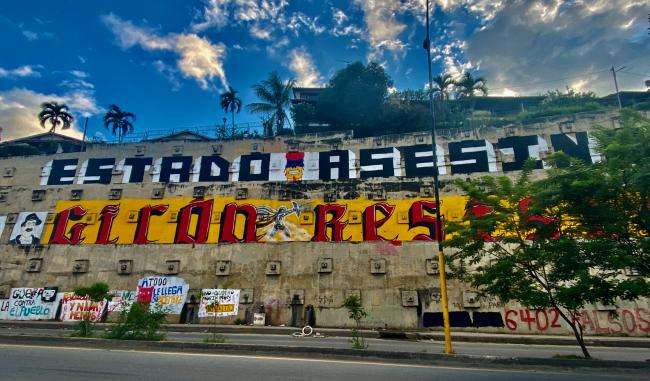 On August 26, Colombians took to the streets to celebrate four months of resistance. Across the nation, people carried signs, sang, danced, and painted murals. But these peaceful demonstrations were met with violence: vigilantes took public order into their own hands, attacking protestors and shooting and killing student leader Esteban Mosquera. Since the protests began on April 28, officers from ESMAD (Mobile Anti-Disturbance Squadron) have consistently used disproportionate force to break up protests, aiming tear gas canisters directly at protestors, showering peaceful marchers with rubber bullets, and beating back protestors with batons. In light of growing violence from police and armed civilians, many were afraid to participate.

In July, I took part in #MisionSOSColombia, an international verification mission investigating human rights violations since the protests began on April 28. The investigation was made up of 42 people from 13 different countries in Europe and the Americas and formed at the request of several Colombian peace organizations, including el Centro de Investigación y Educación Popular (CINEP), el Instituto de Estudios para el Desarrollo y la Paz (INDEPAZ), and Coordinación Colombia Europa Estados Unidos (CCEEU). #MisionSOSColombia delegates from civil society organizations in academia, human rights, law, public policy, and journalism were divided into groups and sent to 11 regions, including the Caribbean and Pacific coasts, the central Andes, and the southwest.

#MisionSOSColombia built on the findings of three similar preceding missions, covering a wider geographic area and collecting hundreds of personal testimonies that demonstrate the systematic political and violent repression of protests in Colombia. We found clear evidence of disproportionate use of force by police, violence from paramilitaries and armed civilians, and arbitrary detentions of protestors. State judicial and human rights organizations deny the existence of these violations, upholding a climate of impunity. President Iván Duque has publicly denounced protestors, calling them armed groups, terrorists, and guerillas. By ignoring violations by state actors and demonizing protestors, his administration encourages police and vigilante violence.

Hope Against All Odds

#MisionSOSColombia was the first mission to visit Santander, in the northeastern Andes bordering Venezuela. During three days in the region, participants gave testimonies describing both the violence they had witnessed and their reasons for continuing to protest. Young people have started calling themselves “la generación no futuro” (the generation without a future) referring to the increasing costs of education, the lack of work, and the rapidly rising costs of living in Colombia. They said that they were scared, but that if they did not keep marching, they would never have a future.

One particularly memorable meeting was with the group of students who started the olla comunitaria (community pot) in the regional capital, Bucaramanga. During the national strikes, these ollas have become important symbols of hope, offering protestors—and anyone else who is hungry—support and a home-cooked meal.

The purpose of the olla is to compensate for the lack of social safety net. The olla organizers saw people struggling and wanted to help.

What started as a project to feed anyone in need became part of a political movement. The olla creates a sense of collectivity through sharing food, which organizers see as an act of protest against the individualism and competition created by capitalism. Homeless youth, people from the poor barrios, and migrants have begun to participate in the protests and become leaders, discussing Colombia’s problems and their hopes for the future while sharing food around the olla. The organizers described the olla as part of their movement’s pedagogy: by meeting people’s basic needs, they gain respect and trust in a moment when almost three million Colombians go hungry every day.

Protestors continue to put their bodies on the line to fight for the future of their country, remaining hopeful despite the repression they face.

“Many of my friends my age do not want to have kids because they do not see a future for them here,” said one young man who was injured in the protests.“But I want this country to change so that I can have my own family one day, and raise them to have a dignified life. And I want to do that here in Colombia.” 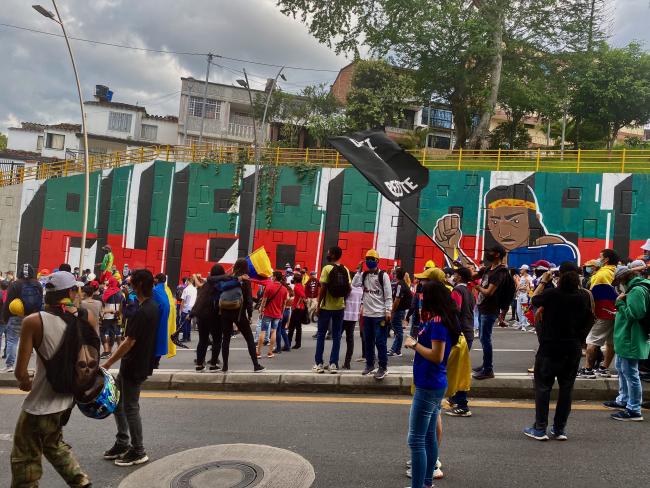 The actions of Colombian police have repeatedly stigmatized and delegitimized the protests and brutalized protestors. Police have attacked olla comunitaria sites as well as the medical brigades, alternative press, and human rights defenders who accompany the protests, attempting to weaken the protests by leaving the protestors on the frontlines without medical, legal, or logistical support. Many reporters said that they were attacked, arbitrarily detained, and forced to delete their photos and videos of police violence. In some cases, police tried to destroy their phones.

The attacks on protestors are part of a systemic and historical pattern of violence in Colombia. In 2016, the Colombian government signed a peace treaty with the Fuerzas Revolucionarias de Colombia (Revolutionary Armed Forces, or FARC) guerilla group, ending more than sixty years of armed conflict. Current President Duque was a fierce critic of the peace deal, and since being elected in 2018, has resisted implementing it. There has been no agrarian reform, no serious attempts to demobilize right-wing paramilitaries, and little reintegration of former FARC fighters into Colombian society. Death squads are actively targeting social leaders and ex-combatants, and government institutions have failed to properly investigate these assassinations. This pattern of impunity continues in the protests.

“We’ve been abused by the public forces since the movement started,” said a university student who helped organize one olla comunitaria. “They captured a compañero recently, and they wanted to charge him, but he got out. There’s a video of it where you can see they absolutely attack him.” The student added that the police also encourage others to attack and “send civilians to drive us out, to stop us, to hit us with sticks, to throw rocks at us.”

Members of the primera linea (front line) have felt the worst of the violence. The primera linea is made up of young people who wear gas masks and carry homemade shields to defend the protestors behind them against the “flash bang” grenades and tear gas canisters launched by police. International protocols and Colombian laws require police to fire projectiles indirectly; they can fire canisters into the air or at the ground only. Between May and July, #MisionSOSColombia documented dozens of cases across the country where police fired projectile weapons directly at protestors. During the investigation in Bucaramanga, some of the front line suffered these direct attacks. We interviewed two young men who were injured: one with broken fingers and scarring, and another walking on crutches with bandages on his legs.

They think we are vandals, we are guerrilleros,” said a student participant in the protests. “I’ve never belonged to the FARC or the ELN.”

Duque and his administration have maintained that the primera linea are terrorists and guerillas. On July 25, Minister of Defense Diego Molano announced that security forces had arrested 134 primera linea members. These arrests were the largest sweep in a series of arbitrary arrests across Colombia. Protestors have also received death threats from paramilitary groups. However, the government denies the existence of right-wing and police violence against protestors. Instead, they remain obsessed with weeding out anyone perceived to be a leftist threat, accusing the front line of being financed by the ELN and FARC guerillas, despite no evidence to support the accusation.

With faith in public institutions so low, it is unsurprising that almost none of the participants abused or detained by police made official denouncements through state channels, fearing retaliation if their names and contact information were on record. One victim said he was afraid to go to the hospital after being injured at a protest because police sometimes look for protestors at hospitals to detain and question them. Another protestor was followed home after a march by an unmarked car. The driver pulled a gun on him as a “warning” to stop participating in protests.

Even in cases of violence with clear evidence, officers are often granted impunity. During the investigation, #MisionSOSColombia found ample evidence supported by state judicial and human rights institutions. When interviewed, officials from the national and municipal police, the governor’s office, the Human Rights Ombudsman, and the Bucaramanga mayor’s office insisted that there had been almost no cases of violence or arbitrary detention in the region. One representative suggested that the real victims were the police. These state institutions are complicit in a culture of impunity that protects military, police, paramilitaries, and armed civilians that support the government stance.

Despite the government’s efforts to downplay the violence, the NGOs Indepaz and Temblores documented 80 deaths during the first three month of protests. The majority of victims were killed by police. The youngest victim was 13 years old. During the first two months of protests, they also documented 19 massacres, 28 cases of sexual violence, 1832 arbitrary detentions, and 1468 cases of violence. But the real numbers must be even higher because in only three days, the mission collected hundreds of new testimonies of abuse and death.

An International Call to Action

Faced with powerful systems of repression and impunity, protestors need outside support to create the change they seek. #MisionSOSColombia calls on the Colombian government to immediately halt their efforts to end the protests through violence against protestors and the persecution of social movement leaders. As part of this process, the Duque administration must sit down for real dialogue with protestors, as well as demilitarize its police force and dissolve the anti-riot police unity. In previous attempts at dialogue,  the government negotiated only with the National Strike Committee, leaving out many sectors involved in the protests. As a result, talks have not advanced. In June, the Duque administration announced it would decentralize talks, leaving governors and mayors scrambling to deal with issues like public education funding, tax reforms, and subsidies for poor families that require reform at the national level.

The Colombian state will not take any of these actions without pressure, so the international community must demand that the Colombian government comply with the recommendations of the Interamerican Commission on Human Rights. International allies of the Colombian government should cut aid packages if human rights abuses continue. In the United States, this is a requirement of the bilateral agreement with Colombia over aid. So far, Secretary of State Anthony Blinken has expressed continued support for the Duque administration and a letter from senators to President Joe Biden played into a “two sides” narrative. The Biden administration should listen to the fifteen congress democrats who expressed their concerns over human rights in Colombia in a letter to Secretary Blinken.

The Duque administration’s repression of protestors is authoritarian and anti-democratic, and the need to support human rights and justice in Colombia is more urgent than ever.

As a professor who accompanied our delegation said, “Colombia has never needed a military dictatorship, because we’ve always had a democratic dictatorship.”

It is time for that democratic dictatorship to change.

Emma Banks is a Mellon Postdoctoral Fellow in Anthropology at Tennessee State University. She has done research and solidarity work in Colombia since 2013. You can read more about her work on her website.