In November 15 elections, Black women are running for office to continue the legacy of the murdered councilwoman and address historical underrepresentation in politics. 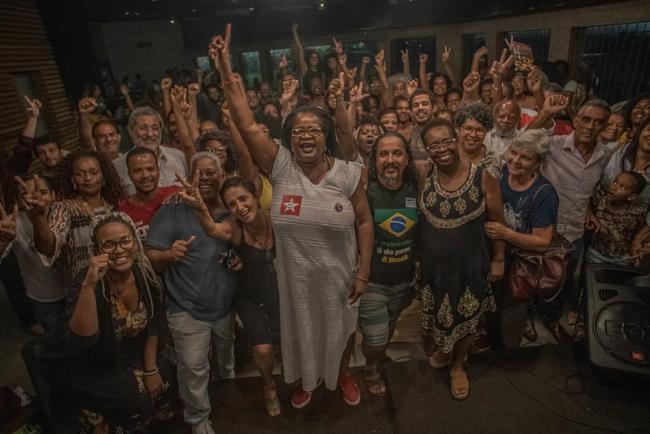 Black women have been historically underrepresented in elected positions in Brazil. Since Brazil’s re-democratization in 1989, the Black population, which makes up more than 50 percent of the total Brazilian population, is not equivalently represented among elected representatives. A 2016 study by the Centro Feminista de Estudos e Assessoria (Cfemea) they found that while Black women make up 26 percent of the population, they only hold 5 percent or less of the seats in Brazil’s legislative councils.

This underrepresentation impacts public policies. The Black population was disregarded in measures including the pension reform, which disregarded the life expectancy of the Black population. In addition to underrepresentation, there are reasons for concern when Black women are elected. In 2018, Marielle Franco, the only Black councilwoman from the city of Rio de Janeiro, was killed. Her murder, still unsolved, challenged the limits of Brazil’s democracy.

While Marielle's murder could have had a chilling effect upon Black candidates, it instead inspired a wave of Black candidacies. Marielle Franco's trajectory was a continuity of predecessors such as Benedita da Silva and Olivia Santana. In the 2020 election, the political seeds of Marielle, both her inspiring trajectory and tragic death, flourish in in Brazil’s embattled democracy.

When Brazilians vote in municipal elections on November 15, numerous Black women candidates, including mayoral contenders in Salvador and Rio de Janeiro, will be on the ballot. In the 2018 election this trend was already evident. However, the number of candidates is still not proportionate to the overall population of Black women in Brazil. Marielle Franco’s life is the driving force behind a movement, but also a reflection of an ancestral trajectory of Black women in politics. Despite these gains, Black women still face institutional barriers to run for office and as elected politicians.

Brazil’s Proclamation of the Republic was in 1889, yet the right to vote was only universalized in 1985, when people considered "illiterate" gained their rights. Before that, there were restrictions based on income, sex, and during undemocratic periods in the country.

Since 2003, the country has adopted affirmative policies in several areas to expand Black participation. In 1988, the Brazilian Constitution authorized affirmative action for women. Since 1997, all political parties must have at least 30 percent female candidates. Even so, not all parties fulfill the minimum percentage of women candidates.

The underrepresentation is even worse when looking at candidates such as governors and mayors. In the 2014 elections, six of the 27 state governors-elect said they were Black, and only one women was elected. By 2018, there was still only one women governor, and three elected governors identified as Black. No Black women were elected governor in Brazil in the 2014 and 2018 elections. For executive positions, Black women are not anchoring ballots as candidates.

Despite the historic difficulty, Black people have always articulated independently to run for office, both in parliament and in executive positions. Black participation led to important advances in the Constitution of Brazil, such as the criminalization of racism in 1988. Antonieta de Barros, elected in 1934 by the Liberal Catarinense Party, was the first Black woman to occupy a state legislative seat in Brazil and the first woman in the state of Santa Catarina. Like Antonieta de Barros, Black women historically sought political office to project a collective Black agenda.

In the documentary Sementes (Seeds), Éthel Oliveira and Júlia Mariano chronicle the impact of Marielle Franco’s murder on the political trajectory of six Black women: Jaqueline de Jesus, Mônica Francisco, Renata Souza, Rose Cipriano, Tainá de Paula, and Talíria Petrone. Oliveira and Mariano illustrate that Marielle Franco’s example in 2018 was a symbol of hope. Marielle Franco would be a seed in the lives of these and other Black women who mobilized to fight the advance of the far Right in Brazil.

In 2018, a group of Black women who shared a political agenda with Marielle Franco in the party Partido Socialismo e Liberdade (Socialism and Liberty Party, PSOL) were elected. In Rio de Janeiro, the media called this the Marielle effect. Three former advisers of Marielle were elected as state deputies: Renata Souza, Mônica Francisco, and Dani Monteiro. Talíria Petrone was also elected as federal deputy. 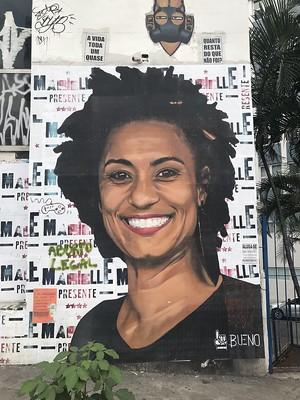 Important advances have taken place in other states. São Paulo elected the first trans woman as a deputy, Erica Malunguinho, who is Black. Bahia elected a Black woman as state deputy, Olivia Santana, for the first time. And in Pernambuco, a group of five women were elected together to occupy one seat in the legislative assembly. The Juntas (Together) Mandate includes Robeyoncé Lima, Carol Vergolino, Jô Cavalcanti, Kátia Cunha, and Joelma Carla.

Congresswoman Benedita da Silva from Rio de Janeiro presented a proposal at the Supreme Electoral Court to require proportional distribution of party resources among Black and white candidates. Benedita's demand is not new. In 2014, former candidate for deputy Douglas Belchior accused the PSOL of not allocating the party's resources equally between white and Black candidates. There is an ongoing discussion of the viability of the proportional division of party resources in these elections. However, the effect of this measure is yet to be analyzed because campaign resources do not depend exclusively on party funds, but also on donations and candidates' resources. These imbalances further disadvantage Black and women candidates. 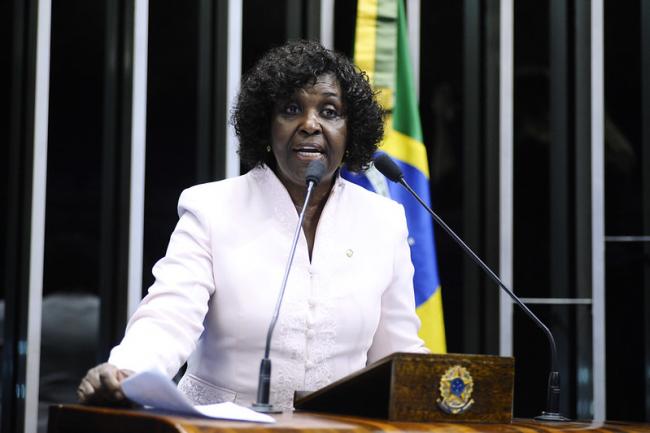 The mayoral races in Salvador and Rio de Janeiro provide an opportunity to analyze the challenges Black women candidates face. Those two cities are extremely relevant nationally, Salvador as the blackest city of Brazil, and its first capital, and Rio de Janeiro, the capital of Brazil until 1960. Salvador had a record number of Black pre-candidates for mayor in the 2020 election. Five people ran for party nominations, and at the time of this writing, two Black women were running for mayor. In Rio de Janeiro, three Black women are running for mayor: Benedita da Silva (PT), Suêd Haidar (PMB), and Renata Souza (PSOL).

In 2019, the sociologist and activist Vilma Reais, the councilman and activist Sílvio Humberto, the president of the Ilê Aiyê Group Vovô do Ilê (Grampa of Ilê), the State Representative Olivia Santana and the researcher and police major Denice Santiago all announced their intentions to run for mayor of Salvador. The city has never had a Black mayor, but Célia Sacramento, a Black woman, was Vice Mayor from 2013 to 2016.

According to Vilma Reis, it was the Black women’s leadership that shifted political parties’ agenda in the 2020s elections. Vilma says, “We are in a political debate that for us is a civilizing debate. It is unacceptable what happens in this city, where a mother competes for a daycare spot in a line with 150 mothers. This is worse than South Africa during the Apartheid years. It is worse than being subjected to the Johannesburg Bantustans. So, we cannot accept this updated colonial violence, what in literature we call coloniality.”

In the first debate among candidates for mayor, the theme of the day care center was central to the dialogue between Denice Santiago and Olívia Santana (PCdoB). Santana pointed out, “It is not fair for mothers to go out to take care of the children of their employers in upscale neighborhoods and not have a regionalized policy for the establishment of day care centers in Salvador.” 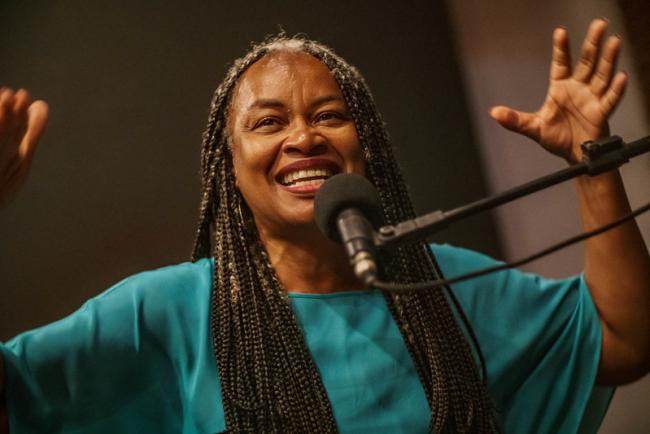 The independent media outlet Mídia Ninja pointed out that only when two Black women are running, would the debate over childcare be so prominent in the elections.

In Rio de Janeiro there was a record of female candidates, with six women running for mayor. In an interview on October 10, Benedita da Silva said, "When I defend the right of women, I am defending 52 percent of the population. Is that identity? It is not. We live under racism, machismo, prejudice from society… …Their identity [Black, female] adds to the inequality they suffer. It is a mistake to not include this. Just as it is a mistake not to call others to this struggle: I want white women and white men to come to this struggle too."

Just as Marielle Franco was the seed for the new wave of Black women candidates, activists like Benedita da Silva, Vilma Reis, and Olívia Santana are trees for those seeds. However, in the barren terrain of elections in Brazil, campaign resources are what feeds the soil. Whether these campaigns will be successful depends on this equation between campaign resources, political visibility, and the population’s acceptance. Whether or not they win, debates over race and gender are now more clearly established on the agenda in Brazilian politics.

Dalila Fernandes de Negreiros is an activist and a researcher on comparative race policies in Brazil and the United States. Currently she is a PhD candidate in African and African Diaspora Studies at the University of Wisconsin-Milwaukee.