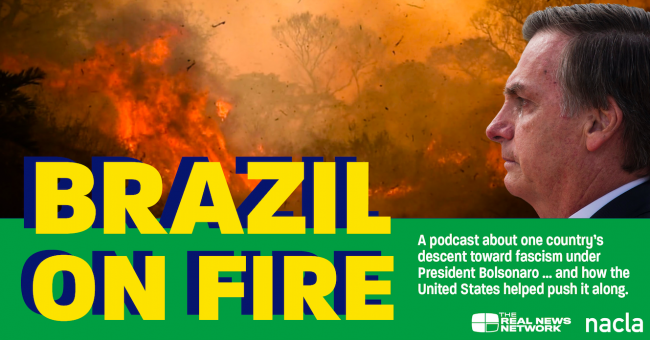 Hosted by independent journalist Michael Fox in partnership with The Real News Network and NACLA, Brazil on Fire is the story of President Jair Bolsonaro’s rise, his far-right government that set the country ablaze, and how the United States helped him do it.

LISTEN TO THE TRAILER

Follow Brazil on Fire wherever you get your podcasts! Episodes coming this September.

Using key issues like family values and security, Bolsonaro's hateful rhetoric and fake news machine painted the 2018 election as a battle for the soul of the country. This episode looks at Bolsonaro’s most ardent supporters and how a culture war born in the United States inspired a wave of political violence.

The election of President Jair Bolsonaro was never a foregone conclusion. Former president Luiz Inácio Lula da Silva was initially favored to win. This episode looks at the fight to free Lula from prison, the corruption investigation that jailed him, the role of the United States, and what it all means ahead of the 2022 election, as Lula again leads in the polls.

EPISODE 3: God Above Everyone – Good versus Evil

Bolsonaro could not have won the presidency without the support of one key group: evangelical Christians. This episode looks at those spreading the gospel for the president and how Bolsonaro and his allies are pushing a religious war of good versus evil—with dangerous repercussions.

EPISODE 4: Nazis on Your Street

Nazis have a long historical presence in Brazil reaching back to the early days of European fascism. President Jair Bolsonaro has emboldened them. In this episode, we look at Brazil’s troubled past of reactionary fascist forces, and how Bolsonaro’s rise unleashed them anew.

EPISODE 5: Ghosts of the Past

Brazil has long failed to reckon with its history of military dictatorship. This episodes looks at how President Jair Bolsonaro regards the dictatorship era with nostalgia and has taken steps to push the country back in that direction.

EPISODE 6: Amazon up in Smoke: Policies of Destruction

There’s no other place that better symbolizes the destruction that Bolsonaro has wrought on the country than the Amazon. This episode looks at how Bolsonaro has fueled land grabs and deforestation, threatening the forest and the Indigenous peoples who live there.