The Alliances of Leftists and Evangelicals in Latin America

Throughout the region, Evangelical participation in politics is growing, with several groups aligning with the Left despite their more conservative beliefs. 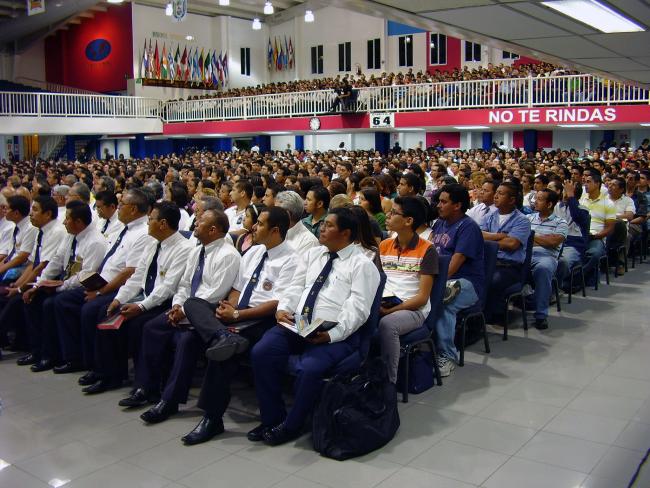 In 2018, political scientist Javier Corrales termed the alliances between Evangelical churches and conservative parties in Latin America “a perfect marriage." Now, divorce might be looming with a new, more intriguing suitor in the game: the Left.

In the last few years, left-wing politicians in several countries have sought out alliances with Evangelical churches, leaders, and political parties. In Mexico, Andrés Manuel López Obrador (AMLO) and his party MORENA entered into a coalition with the Evangelical Partido Encuentro Social (Social Encounter party, PES), in preparation for the 2018 elections. In Venezuela, Maduro took to courting Evangelical leaders in the run-up to the 2020 elections. He granted concessions including commemorating the “Day of the Pastor,” establishing an Evangelical university, and donating thousands of musical instruments to Evangelical churches. Most recently, on September 15, Colombian presidential candidate and former guerrillero Gustavo Petro received the support of Alfredo Saade, an Evangelical leader from the Caribbean coast. Saade’s movement, Levántate, brings together over 400 Evangelical pastors from across the country.

Though surprising, these partnerships are not unprecedented. Given that Latin America’s conservative parties have been strongly associated with the Catholic Church, Protestants of all stripes historically rallied behind liberal parties and even revolutionary governments. Often, these unlikely bedfellows have been united by a desire to diminish the social hold of the Catholic Church. Between 1979 and 1990, during Sandinista rule in Nicaragua, the Evangelical population grew from 5 percent to 15 percent, as the revolutionary government and the Catholic Church fell out over the political appointments that priests could hold. In those years, Evangelicals were more likely than Catholics to vote for Daniel Ortega’s re-election and to voice support for the FSLN leadership. In Venezuela, they supported a new constitution with expanded religious freedoms under Hugo Chávez in 1999, while Catholics campaigned against it on the grounds that it weakened anti-abortion legislation.

At other moments, alliances with the Right have appeared more expedient. For example, in Augusto Pinochet’s Chile, where the Catholic Church participated actively in the resistance, Evangelicals were quick to align with the dictatorship in hopes of securing full religious equality. Taken together, these and other examples illustrate that Evangelical participation in Latin American politics is characterized by a fierce pragmatism served by alliances with both the Left and the Right, depending on the historical moment.

With growing Evangelical populations in the region, it follows that Evangelical political participation would increase, although this has varied from country to country. Even in Colombia, where non-Catholic groups have historically been marginal, recent estimates suggest that as much as 19.5 percent of the national population identifies as Evangelical or Pentecostal.

However, Evangelicals are not necessarily united behind a single political force. Instead, the political landscape mirrors the religious. In the absence of a larger unifying structure, there are many groups, a great deal of splintering, and plenty of competition. On the religious front, this is part of what accounts for the faith’s rapid growth since anyone with a divine calling can establish their own church. But when it comes to politics, this fragmentation can inhibit coordination. In the early 1990s, when Evangelicals accounted for less than 10 percent of the Colombian population, there were as many as four evangelical parties operating simultaneously. Today, Saade’s platform exists alongside two Evangelical parties: MIRA and Colombia Justa Libres.

Despite the frequent inability to create a unified Evangelical platform, Evangelical churches can still serve as valuable electoral allies. This is especially true of mega-churches and multi-site religious organizations that account for tens or hundreds of thousands of followers. They are well-resourced and media savvy. Among their material assets are enormous venues that can double as sites for campaign events, and television and radio channels as well. These establishments are best able to turn religious capital into political capital, although even then it is far from a perfect correspondence.

This translation of congregants to voters, though imperfect, bears weight at the polls. It has helped Evangelical leaders secure seats in city councils, state legislatures, and national congresses. When it comes to presidential elections, Evangelicals have mostly functioned as coalition partners rather than serious contenders in their own right—recent notable exceptions include Fabricio Alvarado, then of the Evangelical Partido de Restauración Nacional (National Restoration Party) who finished second in the Costa Rican presidential election of 2018. But this role should not be underestimated, since elections are decided by very narrow margins in much of Latin America. What political capital Evangelical megachurches and religious organizations can muster acquires outsize value, rendering them king-makers.

The 2018 presidential election in Colombia highlighted this last dynamic. The Centro Democrático’s (Democratic Center) candidate, Iván Duque, defeated Petro with a margin of 2.3 million votes, winning  a total of 10.3 million votes. The Colombian Evangelical parties MIRA and Colombia Justa Libres were key to his victory. These parties are estimated to have delivered approximately 1 million of the total votes for Duque.

Perhaps Petro was taking notes, because he was quick to seek Evangelical support for his 2022 presidential bid. At the launch of his campaign in the Caribbean city of Barranquilla, he referenced Jesus and several saints, and accused the Right of “dealing with the devil.” Shortly afterward, it came to light that the Evangelical leader Saade had helped organize the event, and he endorsed Petro’s candidacy publicly.

For Petro, an Evangelical alliance in Colombia’s densely populated Caribbean coast makes sense. After the capital and the department of Antioquia, it is the third most densely populated zone. And the region accounts for one of the largest concentrations of Evangelicals in the country: 25.4 percent of the population, or approximately 2.25 million citizens. Evangelical churches in this zone could potentially deliver a substantial number of votes. Saade is aiming for 1.5 million of them.

Evangelical groups in several Latin American countries have been able to extend their social influence through involvement in politics. In Brazil, where Evangelicals have contested elections on a variety of tickets, including the left-wing Partido dos Trabalhadores (Workers’ Party or PT), Evangelical lawmakers across parties have sought tax exemptions for their churches, pursued changes to broadcasting laws that allow them to reach larger audiences for their religious programming, secured state funding for religious services by identifying them as cultural events, and obtained land to build churches. Indeed, in the case of Brazil, pastors often seek elected office because it is Congress that controls rights to broadcasting; being in Congress helps guarantee their ability to “televangelize.”

In Mexico, PES benefited greatly from its alliance with MORENA, growing from a fringe party to the fourth largest faction in the national legislature. And where previous Mexican presidents have favored ties with Catholic groups, AMLO opened new doors for Evangelicals, expanding access to mass media, businesses, and real estate. Evangelical religious organizations joined the Interior Ministry in designing the “Fourth Transformation” (4T), a suite of policies targeted at  “repairing Mexico’s social fabric”. As part of 4T, AMLO proposed broadcasting concessions to these religious groups on the grounds of “strengthening values” and enlisted their churches to distribute a government-published book on morals and citizenship. In December 2020, the National Fraternity of Evangelical Churches announced that it had enrolled 7,000 students into a federal scholarship program that would teach biblical precepts in addition to providing technical instruction and job placement. Evangelicals had recruited these students from around the country.

The alliance between Saade and Petro, while novel in the Colombian context, marked the continuation of a regional pattern. Recently, Saade withdrew his support for Petro's campaign, with complaints of having been cold-shouldered by the presidential candidate. Still, the brief flirtation was telling, and an anonymous source in Petro's campaign suggests that similar alliances with other Evangelical groups could be in the offing.

According to recent polls for the 2022 elections, Petro is the front runner for the presidency, even though vote intention for him fell from 21 percent in June to 17 percent in September. The same polls show that vote intention for candidates on the right, with whom one might expect Evangelicals to have greater ideological affinity, is substantially lower.

If Petro wins, what are the implications for Colombia’s Evangelicals? He might follow AMLO’s lead and seek to strengthen ties with Evangelical groups, especially given the Catholic Church’s open hostility towards him. This could result in concessions for Evangelical religious organizations or influence in governmental decision-making and policy implementation. But, as the Mexican case illustrates, the alliance does not portend the triumph of Evangelicals’ “moral agenda,” defined by opposition to abortion and LGBTQ rights. Given Petro’s progressive record on issues like LGBTQ rights, Colombian Evangelicals would have little hope of realizing such a vision.

If Petro wins the Colombian presidency, similar alliances of leftists and Evangelicals could become increasingly common across Latin America. But even if he does not, we should nonetheless expect political innovations – and surprises – from the region’s Evangelical communities as they gain in numbers and political acumen.

Radha Sarkar is pursuing a PhD in political science at Yale University, where she studies Latin American politics.