CO2 emissions in the Amazon doubled in Bolsonaro’s first two years in office. A new study shows that the rainforest may be nearing the point of no return. 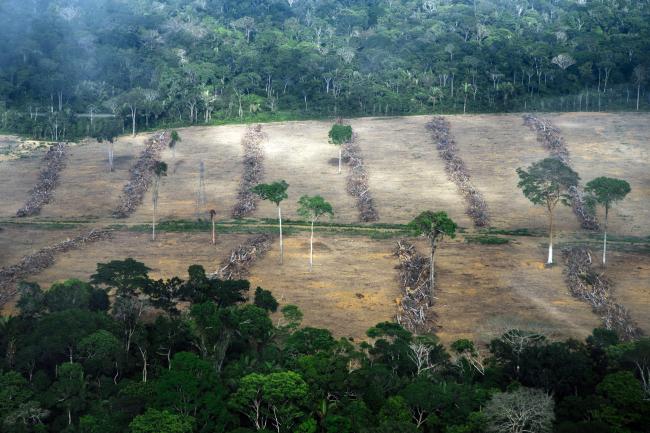 An earlier version of this piece was published by Agência Pública.

A recently published study has found that the impact of President Jair Bolsonaro’s government and its policies on the Amazon rainforest was so great that it produced an effect equivalent in scale to the El Niño weather event, which can cause extreme storms in South America. Luciana Gatti, the study’s lead researcher and coordinator of the Greenhouse Gas Laboratory at Brazil’s National Institute for Space Research (INPE), expressed her despair at seeing the “Amazon being murdered.”

According to the study, carbon dioxide (CO2) emissions in the region doubled between 2019 and 2020, due to the weakening of environmental inspection and control agencies and the resulting surge in deforestation and environmental degradation. The final paper presenting the findings of the study, carried out by a team of 30 scientists led by Gatti, has been submitted to the reputable scientific journal Nature. It is currently in the preprint stage, awaiting peer review and publication, but Gatti said they pre-released the study because the situation is urgent.

The numbers show that the situation is worsening: the team’s previous study, which was published last year and presented data collected between 2010 and 2018, contained the worrying revelation that the Amazon is now emitting CO2 into the atmosphere, rather than serving as a carbon sink. The publication rang alarm bells, warning that the world’s largest tropical rainforest could be nearing the point of no return, after which its original characteristics and capacity to perform key ecosystemic functions could be irreversibly lost.

Gatti, who has carried out research on the Amazon for almost 20 years, explained the latest study’s discoveries. This conversation has been edited lightly for clarity.

Agência Pública: What are the new study’s main warnings in relation to CO2 emissions in the Amazon, its rainfall patterns, and climatic conditions?

Luciana Gatti: The first piece of really bad news is that the rainy season was affected. Until 2018, we saw that only the dry season had been affected: it became drier, hotter, and longer. This creates a strain on the rainforest that causes it to lose its capacity to absorb carbon. This time around, we found that the problem carried on into the rainy season. Some places saw a 40 percent decrease in rainfall, and certain areas experienced a 0.8 degrees Celsius increase in temperature during the months of the rainy season [in] January, February, and March.

The second piece of bad news is that the western Amazon has become a source [of carbon emissions]. The western Amazon was previously better preserved, the forest absorbed [carbon] and practically compensated for all the emissions caused by humans [in the eastern part of the region]. In 2020, the Amazon region as a whole saw a 12 percent fall in its yearly rainfall levels. This is a tragedy. The rainy season saw a 26 percent drop in rainfall. Until 2018, the main changes that we had identified were happening during the dry season. Only in Santarém [in the state of Pará], where deforestation levels stand at nearly 40 percent, had we previously observed a decrease in rainfall during the rainy season. That region represents 10 percent of the Amazon. This time, we saw this across the entire Amazon region. That is really bad news.

AP: How do you explain the changes that have been witnessed in the western Amazon?

LG: The worsening of the situation in the western Amazon has to do with what is going on in [the states of] Roraima, Amazonas, Rondônia, and Acre. The [increase in] deforestation started in 2019. But we did not witness the effect on the carbon cycle in that year, but in 2020. People want to turn that region into another Matopiba [a region of Brazil that encompasses areas mostly located in the Cerrado biome in the states of Maranhão, Tocantins, Piauí, and Bahia, which was the site of the expansion of agricultural activities in the country from the mid-1980s onwards]. But there’s not going to be enough rain. Not just for them—the Pantanal, Cerrado, southeastern and southern Brazil are also going to be affected.

People have to understand that we are living in a period in which climate change is affecting everything, because the natural world is complex. The vision I have of Brazil is one of an airplane heading for the abyss. Its kamikaze pilot, Captain Bolsonaro, is taking everyone to the abyss and all the passengers say is: “Wow, what butterflies in my stomach! This pilot is good.”

AP: Could you tell us about the new agricultural frontier, known as the Amacro zone, in the region between eastern Acre, southern Amazonas, and northern Rondônia? [Editor’s note: Amacro spans 180,000 square miles in one of the most deforested areas of the Amazon. Initially introduced in 2020 as an agribusiness project, the area has since been billed as a “sustainable development zone.”]

This project is causing the western part of the Amazon region to become a source of CO2 emissions. After everything that happened in the Amazon in these two years [2019 and 2020], we saw carbon emissions double. But this is not the only problem; when we think about the Amazon, we cannot only think about it in terms of it being a carbon reserve. In the natural world, everything is connected, one thing is linked to another. That’s how you come to view the Amazon as a great shield against climate change.

AP: How does it fulfill this role?

LG: The more greenhouse gases there are in the atmosphere, the higher the temperature rises. The higher the temperature, the more water vapor stays in the atmosphere without turning into rain. When this process of condensation occurs, there is much more water up in the skies, and it then falls in a much shorter period of time—that is how you get torrential downpours.

The Amazon is one big rain factory: every single little tree takes water out of the soil in liquid form and releases it into the atmosphere as water vapor. To go from liquid to vapor, it takes energy in the infrared range, which is, in other words, heat. As it vaporizes, it cools the atmosphere. The rainforest makes it rain, it cools the atmosphere, and it also absorbs carbon. But when humans cut down the rainforest, we release more CO2 into the atmosphere, leading to a decrease in rainfall and higher temperatures, because the rainforest [subsequently] creates less water vapor. In doing so, we are turning the Amazon into an accelerator of climate change. We are unbalancing the country’s climatic conditions in a short period of time.

We need to drive home this message: the Amazon rainforest is a rain factory that makes agricultural productivity possible. What would happen to Brazilian agribusiness with less rainfall and more extreme weather events? People have to understand that every tree is like a natural air conditioning machine. They have to understand that the forest is not a waste of land, it is a factory that produces rain and water.

AP: How would you describe the impacts of Jair Bolsonaro’s environmental policies on the Amazon rainforest?

LG: I’d say that the Bolsonaro government is a deadly threat to the Amazon. Four more years of him in power would mean that we will surely lose the Amazon. But we are not only going to lose the Amazon. It’s going to be a calamity for Brazil; it’ll destroy agriculture, there’ll be an increase in extreme weather events. A lot of people are going to die, lose everything. The fact that people are in denial does not change reality. We are going to pay the consequences [of Bolsonaro’s policies]. The biggest lesson that I think we can learn from this government is that the environment and the energy sector should not be a matter for the government [in power], but for the state at large. There’s nothing to stop some crazed person from sitting in the [president’s office] and committing all manner of barbarities.

AP: Is it possible to make any kind of projection about the data for 2021 and 2022? Do you think they will show a similar pattern?

LG: Without a doubt, because deforestation was even more intense in 2021 and 2022. We expect an even worse situation. How much worse? I don’t know, because [this time] I didn’t expect to see the rainy season affected. I didn’t expect to see the west [of the Amazon] becoming a source [of emissions]. I thought that it would be worse in the southeast [a region that encompasses the southern part of the state of Pará and the north of Mato Grosso, where, in last year’s study, the biggest increase in temperature was recorded]. I am in despair—they are killing the Amazon. The Amazon is 20 percent deforested, with another 20 percent in a state of degradation, so we are talking about a loss of 40 percent, not 20 percent. Bolsonaro claims that 80 percent [of the rainforest] is still intact, but that’s not true.

AP: Is that why you and other researchers say that the inventories of greenhouse gas emissions and removals submitted by the Brazilian government to the United Nations Framework Convention on Climate Change (UNFCCC) are underestimated?

LG: The inventory does not take into account emissions that result from degradation. Worse than that: it does not count any of the emissions coming from forest fires. These are two reasons why they are underestimated. And there’s even a third: the reported level of [CO2] absorption is greater than it is in reality.

AP: Last year, after the publication of the first study, you argued in favor of an immediate moratorium on deforestation in the Amazon and for the need to promote reforestation projects. Is this even more urgent now?

LG: This is an emergency. We have certainly already deforested more than we could have [gotten away with]. And the worst thing is that there are new projects for highways and hydroelectric plants [in the region]. We are going to lose the Amazon and put Brazil in a situation of calamity.

Anna Beatriz Anjos is an investigative reporter dedicated to covering the impacts of the climate crisis and socioenvironmental conflict. She has worked as a reporter for Agência Pública since 2016, and has won several prizes for her work, including the Prêmio Roche de Jornalismo em Saúde (2015), 35th Prêmio Direitos Humanos de Jornalismo (2018), and Concurso de Jornalismo de Dados “Todos os Olhos na Amazônia” (second place, 2020).