Colombia now has one of the most liberal abortion regimes in the Americas, but with conservative groups rallying in opposition, the future of the country’s abortion rights is far from secure. 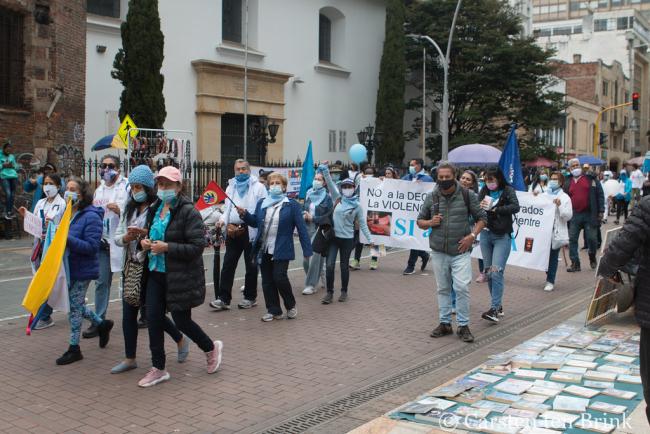 In February 2022, Colombia’s Constitutional Court decriminalized abortion up to 24 weeks of gestation. A few months later, Colombian voters elected their first ever leftist president, adding momentum to a regional leftward turn that would solidify with Brazilian President Luiz Inácio Lula da Silva’s return to power. While these were substantial victories for progressives in Colombia, one of Latin America’s most conservative countries, they have also galvanized the grassroots right.

While plenty of scholarly work has studied left-leaning civil society groups, academics know comparatively little about the contemporary grassroots right in Colombia or in Latin America more broadly. What we do know suggests that the issues that define the Right today—and differentiate it from previous iterations—is the focus on sexuality politics, including opposition to abortion and LGBTQIA+ rights. As scholars of Latin America Lindsay Mayka and Amy Erica Smith observe, “One reason sexuality politics has become a magnetic core for the right is that these issues have unique power to mobilize religious conservatives—both Catholics and the growing body of conservative Evangelicals.”

From interviews with conservative politicians, activists, and church-goers in Bogotá, Medellín, and Cali, I have found that this New Right is shaping Colombian politics in three ways: 1) through unprecedented electoral alliance-building between Evangelicals and Catholics, 2) through the adoption of new strategies by conservative Catholics, and 3) through the political mobilization of Evangelical congregations. At the heart of these efforts is a conservative stance on abortion.

The 2022 congressional elections presented an example of how Catholics and Evangelicals are working together against abortion rights. For instance, the candidate list of the anti-abortion group Unidos por la Vida (United for Life) featured Evangelical pastors alongside self-proclaimed Catholic missionaries, spanning six different political parties. These candidates signed a “Pact for Life,” declaring that if they won office, they would enact policies against abortion.

These alliances are especially surprising when we consider that through the late 1940s and much of the 1950s, during Colombia’s decades-long civil war referred to as La Violencia, Protestant missionaries—and especially Evangelicals—were subject to beating, harassment, stoning, the burning of their churches, and murder at the hands of the country’s Catholic majority. Old fault lines are giving way to new coalitions between these formerly antagonistic groups.

In addition, there are also shifts in the strategies used by both groups symbolically, organizationally, and discursively. Increasingly, Catholic conservatives are organizing and participating in politics on the basis of their religious identity. We see the use of Catholic symbols in politics, such as images of candidates signing the “Pact for Life” pledge beside statues of the Virgin Mary. This kind of explicit signaling of Catholic identity to voters is new to Colombia, at least since the declaration of the state as secular in 1991.

Organizationally, lay Catholics are pushing for greater political organization. Among my interviewees were self-proclaimed Catholic missionaries, many of them young mothers. Their lack of prior political experience or connections did not stop them from running for national office. Some receive extensive guidance and training, including a week-long in-person boot camp, from the Medellín-based Catholic thinktank Conciudadanos. Jasbleidy López is one of them. A stay-at-home mother who homeschools her two young children and who has no former experience in politics, she ran for the House of Representatives in Bogotá in the 2022 elections. She did not win, but she plans to stay involved in politics and run again, beginning with local elections in 2023.

Why get involved in politics? Almost all my interviewees presented narratives consistent with the idea of mobilizing under threat. They portrayed recent progressive wins as threats to the moral foundations of society, harbingers of a “culture of death,” in which the recent abortion liberalization was the most egregious step. They argued that being in government was the best way to make sure their demands will be fulfilled.

My interviewees also uniformly discussed their agendas in the language of rights, a discourse traditionally favored by the Latin American Left. In light of recent debates on gender-progressive curricula in schools, they called for “the rights of parents to educate their own children.” They argued that abortion liberalization and same-sex marriage constituted infringements on their religious liberties and “the right to profess their faith.” As Mayka and Smith point out, these rights-based frames present right-wing demands as “righteous and nonnegotiable [while] depicting their opponents as depraved human rights violators.”

New alliances are also forming between formerly divided Evangelical political actors. MIRA, a Christian political party that has outlived other Evangelical parties and had never run in coalition with another party at the national level in its 22 years, formed a pre-election coalition in 2021 with the right-wing party Colombia Justa Libres. In the past, these parties have failed to form alliances. But they came together ahead of the 2022 general elections partly because of a heightened political maturity, and partly through recognition of a political moment in which the abortion rights debate was heating up.

Evangelical churches have also served as key nodes for the growing grassroots right. The numbers of these churches are growing steadily—a 2019 study estimated that 19.6 percent of all Colombians identify as Evangelical. And Evangelicals are also likely to attend church and congregational activities more regularly than their Catholic counterparts, which means that they are more likely to be exposed to messages and networks that relate to politics.

These include discussions of abortion and related legislation, which are explicit in Evangelical churches. Pastors open services for thousands of congregants insisting that under no circumstances can Christians support abortion. Church corridors display anti-abortion posters, and call for citizens to support proposals to reverse abortion liberalization. 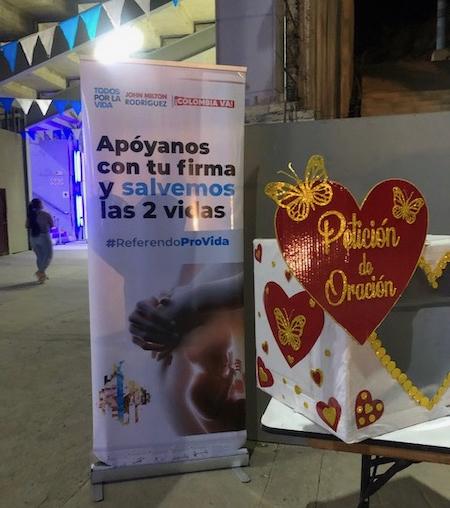 Like the trend among lay Catholics, Evangelical churches also press their members into politics, not only as voters but also as candidates. Natalia Lasso, one of 21 city councilors in Cali—Colombia’s third most populous city—entered politics in just this way. A long-time member of the Nazarene Church, she was urged by her pastor and church leader to get involved in politics in the aftermath of the 2016 mobilizations against gender progressive school curricula. Initially she protested, but then decided that “if the pastor says so, he must have a plan.” While Lasso did not win office in 2018, she did in 2020. These church-backed candidates have predictably conservative positions on sexuality politics.

What is the ultimate goal of these religious conservatives? Sara Patiño, a youth member of the Medellín city council who won office with the support of anti-abortion groups rather than through a political party, is emphatic: “To change the laws, and to change the culture” regarding abortion; to make it legally punishable and socially unacceptable. The overturning of Roe v. Wade in the United States demonstrates that much longer-standing legislation is not immune, although we have good reason to expect that this will not reverse the global trend of expanding abortion rights.

Hopefully, Colombia’s fledging abortion rights will be able to withstand the onslaught from conservatives. In their long struggle toward decriminalization, feminist organizations strategically took the fight for abortion access to the Constitutional Court because it has historically been more progressive than Congress; expanding abortion access through a bill would have been less likely. But this also exposes the new laws to the criticism of having bypassed voters and their elected representatives, and therefore not reflecting the will of Colombian citizens.

Currently, Evangelical-led conservative groups are proposing two separate anti-abortion referendums. If their bid is successful, these measures would put the question of whether to introduce a constitutional ban on abortion to a popular vote. Before a referendum of this sort can be convened, its proponents have to demonstrate widespread citizen support for such a vote by collecting 1.95 million signatures. A six-month period to collect signatures ended in 2022, but in December the nation’s National Electoral Council extended the deadline by three months. The platform Unidos por la Vida has stated that their goal is to collect 3 million signatures, with an aim to modify articles 5, 11, and 18 of the Colombian Constitution—all pertaining to defense of life and the family— through a national referendum. The amendments would also guarantee the right to conscientious objection for all public and private sector workers.

If the referendum is called, the vote will be tight. A 2022 survey by the pollster Ipsos found that that 44 percent of Colombians surveyed believed that abortion should be illegal in all or most cases, while 40 percent thought it should be legal under all or most circumstances, and 16 percent were undecided or preferred not to answer.

We have good reason, however, to hope that a progressive agenda on abortion will prevail. For one, legal experts opine that retracting what is now a constitutional right through majoritarian means is unlikely. Second, we can count on Colombia’s strong feminist organizations, which are increasingly savvy in their use of symbols, social media, and public space to advance their struggle.

The expansion of abortion rights also has the backing of the country’s top leadership. Colombian President Gustavo Petro has supported measures to liberalize abortion, although he suggested that provisions should have allowed termination of pregnancies up to 14 weeks, not 24 weeks, of gestation. Vice President Francia Márquez has been unequivocal in her support for abortion rights.

Still, referendum or not, for Colombia’s abortion activists the tremendous 2022 decriminalization victory is not the end of the war for women’s bodily autonomy. In a talk at Yale University in December 2022, leaders of Causa Justa, the Colombian pro-choice movement that brought the issue of abortion to the courts, recognized the long road ahead. They acknowledged that they must now turn their attention to spreading awareness about abortion access, combatting misinformation by the Right, and monitoring implementation of the new laws. Cristina Villareal, one of the earliest proponents of abortion access in Colombia, told feminists in the United States after the reversal of Roe v Wade: “This battle is never completely over…You can never let your guard down.” Her wisdom is just as relevant for her fellow Colombians today.

Radha Sarkar is currently a PhD candidate in the department of political science at Yale University. Her research focuses on Latin American politics.