An archive of creative rebellion reminds us how maneuvering within imperialism’s blindspots helps pry open space for resistance and liberation. 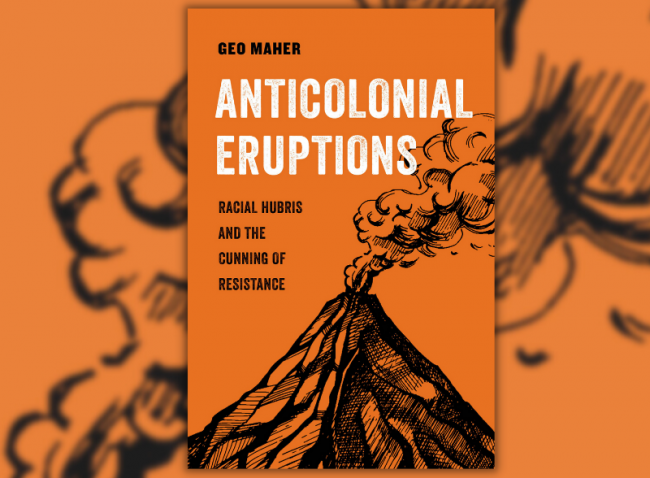 During Central America’s armed conflicts, volcanoes served as key gathering points and operational centers for the men and women that comprised El Salvador’s ERP and FMLN as well as for Nicaragua’s Sandinistas. Cerros, as they are called in my native El Salvador, were important sites of skirmishes throughout the 1980s, and many battles began, were waged, and ended on their slopes. The Guazapa Volcano, near my hometown, that served as a guerrilla stronghold, was one of the many volcanoes at war.

As central motifs, symbols, and repositories of culture, volcanoes are important elements in the imaginaries and self-stylings of communities scattered across the earth’s surface: from Indonesia to Iceland, Italy to Mexico, in Central America, the Caribbean, and the Andean world. Volcanic narratives have been a source of powerful metaphors for describing upheaval, revolution, and the tectonic shifts of historical motion.

Yet seldom has the volcano and its activity—eruptions, quakes, lava flows—been taken up as a unit of political theory or to understand popular action. Geo Maher’s Anticolonial Eruptions offers a critical repository of popular power—from the enslaved and the indentured to smugglers, organizers, workers, tricksters, anticolonials, and abolitionists—whose disruptive and eruptive actions shocked the white supremacist, colonial, slavocratic status quo and precipitated movements that reconfigured social relations. Articulating what Maher calls the “decolonial ambush,” small acts with historical impact were born from collective desires for freedom, gestated in and through the unruly and explosive politics of the subjected. The historical record reveals how people inconspicuously mobilized and charted paths towards their liberation by leveraging “weapons of the weak”—or what philosopher Enrique Dussel calls “hyperpotentia” and that Maher describes as a “second sight”—to topple the realities imposed by the powerful.

Maher reminds us how the language of natural disasters—whether linked to eruptions, floods, or earthquakes—has been used to mobilize subversive action. Colonizers, too, have employed the same language to minimize and dismiss the force of radical proposals. Maher’s volcano is in Anticolonial Eruptions a purveyor of political concepts, a way to understand the multi-scalar ways that communities revolted against the suffocating conditions produced by an arbitrarily imposed yet brutally enforced social hierarchy. He deploys the metaphor of “eruption” in a double sense to describe both the sudden panic and confusion that afflicted colonial and imperial elites when dehumanized subjects rejected the colonial division of humanity, and the liberatory explosion coming from the lowest rungs of society who defiantly burst onto the scene of history. Or, as C.L.R. James put it, in revolutionary moments “when the ceaseless slow accumulation of centuries bursts into volcanic eruption.”

Anticolonial Eruptions unearths the volcanic subsoils and reveals a subterranean complex of resistance, cunning, conspiring, and political activity buried within conditions heated by unsustainable social and political relations. This is a “hidden abode” of resistance, a liberatory impulse driving what we, on the surface, may identify as a politics, survival strategy, living practice, overlooked radical traditions.

Throughout, but particularly in the chapter titled “Moles,” Maher turns to guerrilla activity to illustrate this subaltern cunning. He highlights the example of Vietnam’s National Liberation Front (NLF), that used the “literal and figurative undergrounds,” or tunnels, to deal an unremitting blow to the U.S. military. Attending to power’s limited sight—a conceptual and operational blindness—Maher writes how miles of underground tunnels were vital infrastructures to the Vietnamese resistance for moving troops and weapons, but also communication, culture, and experience—“a wealth of valuable contraband”—in advance of the Tet Offensive in 1968. These strategies led to important victories against colonial and imperial aggression; exploiting the blindspot of power was instrumental to revolutionary success.

In Central America, Salvadoran guerrillas used caves and tunnels known as tatús in a similar dynamic. Like in Vietnam, the Salvadorans understood that undetectability was beneficial to evening out the terrain of struggle, helpful for giving them the jump against arrogant militaries. From these clandestine spaces, as Maher puts it, “the colonized subject springs forth from the zone of nonbeing.” In this way, “the underground…qualitatively transformed warfare by amplifying the role of the unknown.”

Within this underground, Maher writes, individuals and collectives plot and devise forms of resistance to achieve their freedom dreams, oftentimes by merely outliving decrepit realities. Maher threads an argument about the practical activity of marginalized, racialized, motley underclasses across historical time, from U.S. plantation slavery to Caribbean wars for liberation, to global decolonization movements, to efforts to build socialism from below in Venezuela. In doing so, he reveals the accumulative and iterative power of undetectable politics. In other words, what passes as quotidian and insignificant to white supremacist, colonialist, and imperialist sight can be—and often is—the creative soil of resistance. The colonial blindspot unknowingly creates advantageous sites for political action for those who occupy the “savage slot” in society. Here, the groundwork for subversion—a decolonial reply—comes into being.

This book is an archive of the decolonial resistance practices of groups and individuals who, from within the shadows of colonialism and imperialism, managed to stealthily move and wage struggle by other means. It is about how marginalized actors embraced the definitions projected onto them and, in an act of detournement, used these as revolutionary weapons. Maher shows how historical chroniclers, politicians, and philosophers reacted to these activities, always perplexed, stupefied, dumbfounded. They viewed rebellion, such as the Haitian Revolution, which produced its own chain reaction across the Caribbean and the Americas, as an “unthinkable” event.

The book also offers a political account of racialized migration. Migration is examined here as a modern-day expression of how subterranean knowledges emerge out of the necessity to survive along the migrant trail, specifically in Mesoamerica. Techniques of travel are passed across groups to ensure as much safety as possible. Migrants compare notes with each another and share vital information, detailed maps, and best practices as acts of care, solidarity, and mutual aid. Here Maher echoes work theorizing migrant caravans as a social movement, from Alberto Pradilla’s political accounts of Honduran caravans to Viktoria Zerda’s “coyote commune.” Migrating people are co-creating, world-building, and, by virtue of their defiant mobility, offering an embodied critique of the limits of state sovereignty and the fictions of transnational social control. Migration, in this sense, might be thought of as a kind of pyroclastic flow oozing over borders, where “los de abajo” or “those from below” signal the limitations of hubristic blockades incapable of containing the lahars of human dignity.

Straddling the aboveground and subsoil, Maher reveals how the “decolonial mole” uses its subterranean advantage to buy time, plotting its path toward freedom from clandestine depths. Typically, we assume that being relegated to the underground signals an end to activity and organization, a banishment to some lifeless outside. But Maher underscores how the underground is a site of possibility and radical invention, a place for preparation, conspiration, and careful strategic thinking where liberation is first—and collectively—articulated. Drawing from Black feminist thought, the book demonstrates how marginality offers a “special vantage point” for critical analysis, recognizing inhumanity, and building counterhegemony. Unwaveringly, the book suggests that we must look for eruptive potentials that are assembling the preconditions for liberation by exploiting the weaknesses of colonial ignorance.

Today, some 30 years after the end of the Salvadoran civil war, tatús are still being uncovered. They are a reminder of the decolonial strategies necessary to outmaneuver colonialism, capitalism, and its forces of repression. For Maher, the point is to uncover and think with those radical ways of being that exceed the sight of white supremacist power and whose motion points to a liberated order. One of the book’s lessons, of course, is that overt political action requires and depends on the iterative, slow, accretional, and everyday forms of defiance that characterize the “small rebellions” found throughout Maher’s book.

We cannot have a cataclysmic eruption without first understanding how its magma came to acquire uncontrollable pressure—that is, how the foreshocks, or warning tremors, led to a bubbling explosion, to the mainshock of the decolonial struggle. Like volcanoes, intricate lava caves and magma tubes are also found across the planet. These are, Maher suggests, the tunnels for political interconnection, for recognizing the counter-systemic power of shared struggles, a potential that rumbles and churns underneath us all.

Jorge Cuéllar is an interdisciplinary academic focused on Central America and its diasporas. He is Mellon Faculty Fellow (2019-2021) and Assistant Professor (2021-) of Latin American, Latino & Caribbean Studies at Dartmouth College.