The ALBA-TCP aims at consolidating a regional space of social, cultural, and economic integration based on the prioritization of social rights and welfare, barter, and mutual support.
Tweet
Dario Azzellini
September 28, 2014 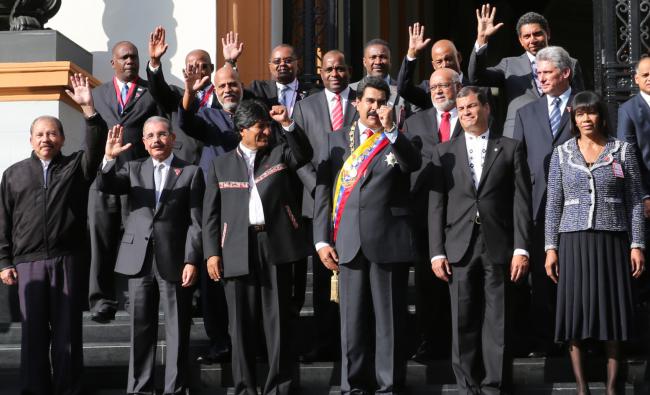 Principles of horizontalism and autonomy can play an important role at the level of international relations. The Bolivarian Alliance for the Peoples of Our America (ALBA), for example, is a Caribbean and Latin American alliance for regional integration based on principles of solidarity, complementarity, and mutual support. Founded in 2004 by Cuba and Venezuela, the ALBA today has nine full-member countries. In addition to the two founders, they are Antigua and Barbuda, Bolivia, Dominica, Ecuador, Nicaragua, Saint Vincent and the Grenadine, and Saint Lucia. Suriname joined as “special guest member “ in 2012 and, along with Haiti, aims at becoming a full ALBA member.

The trade arm of ALBA, the People’s Trade Agreement (TCP), was founded in 2006, two years after the birth of ALBA, and is meant to be a counterbalance to the various bilateral free-trade agreements that Washington has been offering—on its own terms—to Latin American countries.

The ALBA-TCP aims at consolidating a regional space of social, cultural, and economic integration based on the prioritization of social rights and welfare, barter, and mutual support. Its goal is to make it possible for member countries to prioritize social spending, without having the World Bank or the IMF dictate austerity. In order to gain more autonomy from the U.S. dollar and to lower the pressure on the ALBA-TCP countries to gather dollars on international markets to satisfy their import needs, a growing amount of trade since 2010 is operated via an autonomous trading currency called the SUCRE, which, to the degree possible, replaces the dollar in regional trade.

In addition to the use of the SUCRE, member countries try to exchange goods and services through barter. This is largely the case with the fuel ALBA countries receive from Venezuela through Petrocaribe, which can be paid in traditional export goods or services. Dominica, for example, has paid part of its oil bill with English textbooks, expertise regarding natural reserves, and eco-friendly tourism and vacation facilities. Moreover, 50% to 60% of Petrocaribe’s oil bill is provided as a loan at very low interest rates, with a two-year grace period and payment stretched over a maximum of 25 years.

Economic cooperation is often based on either setting up state-owned companies (Petrocaribe does not deal with private companies in the participating countries) or so-called “grannational enterprises,” set up by various ALBA-TCP countries. This is to make sure that the imports and exports are oriented towards the needs of the member countries, and that the majority of profit is reinvested in order to meet the needs of society. The Grannational Imports and Exports Enterprise (ALBAEXIM), for example, facilitates the trade of machinery and commodities from and among the ALBA-TCP countries in order to promote and strengthen their own production, providing greater autonomy from transnational and multinational monopolies and oligopolies.

All of these mechanisms have given the ALBA countries greater autonomy from transnational companies, the United States, “development aid” money, and international financial institutions. This is especially the case for the small Caribbean countries that, to a large degree, depended on the United States and were at the mercy of transnational oil firms, paying even higher prices for their fuel.

The newly gained autonomy and sovereignty also makes it possible for the ALBA-TCP countries to vote for their own interests in the UN and other international forums, as they have done several times over the last few years on climate issues, U.S. military intervention, and U.S. interference in Latin American affairs.

Recently the ALBA-TCP countries stated “deep concern” regarding the racially motivated violence in Ferguson and Michael Brown’s unwarranted murder by a police officer. They called on U.S. authorities for “a fair and transparent investigation” and to “respect human rights when restoring public order.”

Before the ALBA-TCP it was unthinkable for most of those countries to raise their hand against U.S. interests.