Burning Questions: The Life and Work of Michel-Rolph Trouillot, 1949–2012


On July 5, 2012, the world-renowned anthropologist, historian, and writer Michel-Rolph Trouillot passed away in his home in Chicago, after a decade-long struggle to recover from a brain aneurism. He was 62. Trouillot leaves behind a rich body of work striking in its compelling prose, intellectual sophistication, theoretical rigor, and disciplinary innovation. Although an anthropologist by training and professional appointment, he produced both academic and non-academic texts about Haiti, an ethnography (and transnational study) of the Dominican banana industry,  and a book about the politics of historiography, as well as a number of songs and literary texts. His writings reflected his persona: bold, charismatic, unabashed, unapologetic, and fully engaged with life’s pleasures and ironies. 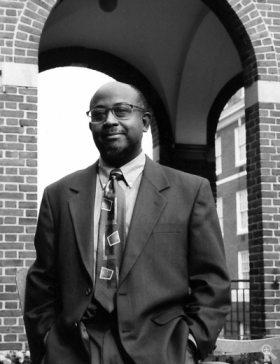 As he explains in Global Transformations (2003), he viewed academic work as more than a simple search for facts. “What I want to know in this case is never merely an empirical fact, let alone what I could learn from someone else—from a book, for instance. It is the knowledge that I want to produce. It is what I want to say about this topic, this site, these people—the ‘burning questions’ I want to share even with myself as interlocutor.” Trouillot’s scholarship was thus always an intimate interrogation—thoroughly informed by personal history and political commitments.

Trouillot’s intellectual profile was in many ways shaped by his remarkable family. As he describes in Silencing the Past (1995), for the Trouillot family, “history sat at the dinner table.” It was both the preferred profession and the favored pastime of many of his relatives. His father, Ernest Trouillot, a lawyer and professor at a prestigious lycee, hosted a television show about Haitian history. His uncle, Hénock Trouillot, was the director of the Haitian national archives, besides being a prolific writer and public historian. His family was also politically minded; Trouillot’s stepmother, Ertha Pascal-Trouillot, a well-known lawyer and judge, was named interim president in 1990 as the country stabilized and prepared for the democratic elections that would bring Jean-Bertrand Aristide to the presidency. All the other Trouillot siblings (Lyonel, Evelyne, and Jocelyne) have become important novelists, essayists, scholars, and educators who blur intellectual traditions and genres, suggesting that it was not only history and politics that sat at the dinner table, but also literature, music, and art.

This legacy alone might explain Trouillot’s academic legacy. But his life was also profoundly marked by the personal experience of immigration and exile. Shortly after completing his BAC II in philosophy in 1968, Trouillot left Haiti as part of a large wave of student activists who fled the political repression of the Duvalier regime. He found refuge with his aunt in Brooklyn, New York, where he completed a bachelor’s degree in Caribbean history and culture in 1978 at Brooklyn College while working as a taxi driver and participating in the flourishing political and cultural activism of the Haitian Diaspora.

Along with other activists, Trouillot founded the musical and theater group Tanbou Libète (Drum of Freedom), an outgrowth of the kilti libète (freedom culture) movement of the 1970s, which sought to build political consciousness within the Haitian Diaspora. At the time, Duvalier had successfully incorporated numerous cultural institutions (including Vodou temples, rara bands, and peasant secret societies) into his governmental apparatus. Political and cultural activists sought to wrestle away Duvalier’s claims to the history of slave resistance and to the peasant traditions born in the wake of emancipation, using them instead as a vehicle for progressive politics.

It was from this perspective that in 1977, as a 28-year-old activist and undergraduate, Trouillot published the first nonfiction book written in Haitian Creole, Ti difé boulé sou istwa Ayiti (A Small Fire Burning on Haitian History). The book’s title suggests an attempt to shed new light on, and ignite new interpretations of, Haitian history. Its narrative form defies conventional genres of historical writing by using the structure of Haitian storytelling; the text is laced with Creole proverbs, wordplay, musical lyrics, and references to Vodou cosmology. Trouillot described this book project as a marriage between his intellectual upbringing and the cultural politics of the Haitian community in Brooklyn: “This was a natural evolution: my father and my uncle both wrote history. In a deeper sense, it was going against class origins and attitudes. Ti difé questions the ‘great men’ tradition of Haitian historiography.”

This early work set the tone for what would become his lifelong tasks: to historicize contemporary political and economic relationships, to question dominant paradigms of history and the interests they serve, and to produce scholarly work that self-reflectively engages with its own conditions of production—all while defying disciplinary genres and the conventions of academic writing and publishing.

In 1978, Trouillot left Brooklyn to enroll in the anthropology program at Johns Hopkins University, where he completed his Ph.D. in 1985. This led to an academic career that took him through a series of appointments, from Duke University to Johns Hopkins to the University of Chicago. While in graduate school, Trouillot shifted his gaze from Haiti toward the rest of the Caribbean. Years later, as a graduate adviser, he encouraged his students (myself included) to follow a similar path by carrying out fieldwork in societies other than their own. He felt it was important to trouble the assumption that minority anthropologists could only serve as “native” anthropologists, but he also stressed the intellectual value of stepping outside one’s own society—particularly for Caribbean scholars who were steeped in long traditions of insularity and claims to exceptionalism. He often asserted that his greatest insights about the Haitian peasantry had emerged from his work in Dominica.

His dissertation, which later became his second book, Peasants and Capital: Dominica in the World Economy (1988), focused on how peasants in Dominica dealt with the transformations of the global banana industry and bridged disciplinary approaches by integrating historiography, political economy, and ethnography. It also questioned traditional notions of bounded anthropological field sites by tracing the historical ties and economic networks that placed Caribbean peasantries into a global economic framework.

Trouillot’s insistence on maintaining a regional (and global) perspective did not keep him from furthering his work on Haiti and on the political transformations under-way there. In 1986, shortly after the forced exile of Jean-Claude Duvalier (and just one year after completing his dissertation), he published Les racines historiques de l’état duvaliérien, which later appeared in English as Haiti: State Against Nation. The Origins and Legacies of Duvalierism (1990). At a time when many were scrambling to fill the seat of power left vacant by Duvalier, Trouillot called attention to the historical patterns and sociological relationships that had produced Duvalier’s rise to power and that had posed the Haitian state—in its extractive and repressive capacity—against the nation it claimed to represent. As he argued in an article published in these pages in 1994, another Duvalier could easily emerge if the structural crisis and socio-economic cleavages that have turned Haiti into “a society at war with itself” are not resolved.

Trouillot’s emphasis on the value of a comparative perspective and on the need to historicize contemporary relationships should not be seen as an uncritical celebration of disciplinary traditions. For in fact, his signature move was to turn disciplinary methods against themselves. In 1995 he published his best-known work, Silencing the Past: Power and the Production of History. Both a work of history and an argument about the epistemological challenges and political stakes of historical scholarship, Silencing the Past has become a foundational text for both Haitian studies and historiography broadly speaking. Here, Trouillot suggested that the Haitian Revolution was (and in many ways remains) an “unthinkable” event: that the idea of enslaved populations rising up and not only resisting slavery but also achieving self-determination and forging entirely new conceptual categories of freedom and equality was beyond the grasp of both observers and participants. How, he asks, can these unthinkable events be rendered into history? In his words, “How does one write a history of the impossible?”

In his last book, Global Transformations: Anthropology and the Modern World (2003), Trouillot gives to anthropology the same critical attention that marked his engagement with history in Silencing. Here he examines anthropology’s historical underpinnings—its epistemic groundings and political consequences. However, rather than offer a pessimistic view of the discipline, he highlights the possibilities and promises of the anthropological project. He encourages young scholars to embrace—rather than shy away from—what he describes as the discipline’s inherent “moral optimism.”

“Moral optimism,” he states, “need not produce political naïveté. The two become close only when that optimism is shameful, when it refuses to present itself as a primal act of faith in humankind, however qualified by history and politics.”

Trouillot’s life and work make it difficult to peg him into a strict category. He was undeniably a “Haitian intellectual,” yet in many ways also an “American anthropologist” and a “public historian.” His writings and teachings will surely continue to influence generations of scholars to come. In 2011, he was awarded Frantz Fanon Lifetime Achievement Award by the Caribbean Philosophical Association in recognition of his academic legacy. The award seems fitting for someone who saw academic work as a vocation rather than as a career.

I remember once, as a young graduate student struggling to find a research topic, I pitched him an idea based on an article I had just read that caught my interest. He listened patiently to my long elaboration and then responded simply, “Are you passionate about this, or do you just think it’s interesting? If someone published a book on this today and answered all these questions, would you still want to write about it?”

The point is that for Trouillot, the truly important questions would never be answered; they were lifelong pursuits, lifelong passions. He always encouraged his students and colleagues to tap into their own burning questions and to follow their passions—because he knew that this was what would truly sustain them and feed not just their careers but, more importantly, their souls.

Yarimar Bonilla is Assistant Professor of Anthropology and Caribbean Studies at Rutgers University.