Climate Debt: Who Profits? Who Pays?

It has been more than three years since NACLA published its last report dedicated to natural-resources, development, and “the new extractivism” in Latin America. That report, which appeared in September 2009, highlighted natural-resource conflicts in which capitalist development projects and environmental problems collided. At that moment, many left-of-center regimes, despite their shared platform to “nationalize” natural-resource wealth, supported a model of transnational extractivism. Several years later, these environmental conflicts have become ever more complicated as new ecological problems associated with global warming threaten to disrupt local economies, means of production, and historic ways of life. This spring 2013 report re-elevates themes from 2009, most importantly the dynamic relationship between extractive industries, environmental degradation, dependency upon non-renewable fossil-fuels, and the altered role of the state versus international conglomerates—all in relation to the climate crisis.

We are living in an era in which the world as we know it is rapidly and radically changing. Weather patterns are more erratic than ever, storms and droughts more severe, landscapes parched, and glaciers disappearing. We are living in a new world where we will all have to imagine “living differently or risk extinction.” Nation-states in the Global South that have historically contributed the least to carbon-dioxide emissions will ironically be especially vulnerable to the consequences of these dramatic shifts because of the damage wrought by extractive industries and the limited resources and state apparatus to cope with such change.

It is in this context that many nations in Latin America, following the UN climate change conference in 2009, proposed a reparation policy of “climate debt.” This proposal asserted that northern nations owed reparations to the Global South for the crisis that they have created. Naomi Klein indicated that the proposal was among the “smartest and most promising proposals” coming from leaders in the South. She further argued in 2009 that this was our very last chance to save a threatened planet. More recently, however, commentators and observers have been a bit more hesitant regarding the transformative possibility of the climate justice movement. In part, as Fabricant and Hicks point out in this report, this is a consequence of the billions of dollars being funneled into lobbying efforts to block any international proposals regarding restrictions on carbon-dioxide emissions. Fabricant and Hicks more largely argue that the global capitalist economy prevents any forward movement on radical climate policy. 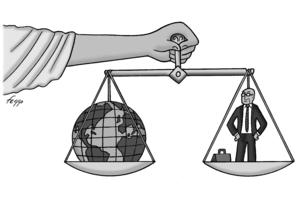 This report, therefore, critically explores the idea of economic, social, cultural, and environmental “embeddedness” of the capitalist system and of the consequent challenges for the climate justice movement. Marxist geographer David Harvey, for example, has noted that the metaphor of the “web of capitalism” is an important analytic construct for the situation we find ourselves in. We begin to see the web of connections between northern dependency upon fossil-fuels and the changed or altered landscapes in the Global South. We can map the connections between private capital in North and South and similar market-based mechanisms as solutions to the climate crisis. Further, a web allows us to weave together the realities of rural and urban spaces and global forms of consumption with localized and daily struggles of survival in Latin America.

Carlota McAllister’s article vividly illustrates the sweeping interconnections between northern consumptive practices and the restructuring of lifeways in the South using specific illustrative material from the dam building in Patagonia, Chile. Historically, dam building has presented a cleaner, greener solution to capturing energy. Nevertheless, people like the Patagonian farmer whose story McAllister tells are frequently forced to reconstitute their lives as water is rerouted outward toward major development projects of hydroelectric power through large-scale dam building. McAllister critically asks whether these “so-called renewable” resources at every level of the chain guarantee “a healthy life.” The dynamic interplay between the degradation of historical ways of life and rapid environmental change is at the heart of her analysis. The rapidity and destructiveness is of an unprecedented scale. Equally important, the direct (hydroelectric dam construction) and indirect (broad climate change) represent the breadth and depth of this change. This idea of “healthy life” as alternative to capitalism has become a popular construct for resistance to global capitalism’s unquenchable, expansive appetite for resource-based wealth. Eduardo Gudynas discusses the concept of buen vivir (living well) in Bolivia and how this has served as a model of alternative development. Yet he also warns of the limitations of such indigenous philosophical tenets for addressing and resolving global climate crisis.

Importantly, every contributor queries the use of market-based solutions to the market-induced problems of “ecological crisis.” Astrid Stensrud’s article about melting glaciers and water scarcity in Peru forcefully asserts that market-based solutions to water scarcity shift responsibility from “the state” to individuals. In this instance, international NGO representatives argue that if rural farmers “could take care of headwaters and use available water more efficiently,” individual families could gain by saving water. These short-term, quick-fix solutions, however, will not resolve the long-term and systemic problem of melting glaciers.

Daniel Cohen’s article also references market-based solutions in Brazil, for example the increasing popularity of proposals for “green economies” essentially using regulation and market mechanisms to slow deforestation and innovate biofuel development to reduce the destructive influences of rapid capitalist development. Juliet Erazo, in her piece about REDD+ in Ecuador, questions “green solutions” through market-based mechanisms of carbon reduction. While Daniel Cohen argues that green solutions essentially mean “fighting commodification with commodification,” Erazo uses the conflict between two indigenous organizations, CONFENIAE and COICA, over carbon measurement as a world in a grain of sand. Her essay uses this specific conflict as a basis for describing the tensions between top-down developmentalist “green economic” projects and the realities of “autonomous indigenous territories”: the need for resources, jobs, and infrastructure. It is within this context that many simply support such market-based and short-term solutions, hoping for much-needed “economic development” in their communities.

Cohen describes yet another layer of “embeddedness,” in this case the intimate connections between rural and urban ecologies and the ongoing challenges of incorporating urban activists into the climate justice movement. He notes that urban dwellers in Brazil are often unable to see the connections between issues of uneven urban development and environmental or climate destruction. As an environmental activist told him, “Bringing urban movements in is a big challenge that we haven’t had a lot of success with.” The daily problems of poverty have blinded urban activists in Brazil. Their blinded reality—or denial—renders them increasingly unable to connect the daily problems of poverty to broad-based global unevenness: such as our constant quest for non-renewable fossil-fuels. As well, he documents the material connections between flows of food, structures of agriculture, and sources of energy. Connecting problems of urban poverty to questions of the environment is one of the many challenges, argues Cohen, facing the climate justice movement.

Bret Gustafson also sheds light on the challenges of building a broad-based climate justice movement in the South: moving beyond “extractivism” does not seem like a real possibility in a place like Bolivia, deeply dependent upon resources like natural gas for economic development and social programming. Yet he does not stop there. He asks what might need to happen to move political debate and discussion toward a deeper understanding of the articulation between the workings of power and politics and the fossil fuel industry. These are important insights that highlight not just the rural and urban divide in climate justice movements but the political conflicts between the Northern anti-carbon, anti-fossil fuel stance, and Southern imaginations of natural-resources providing possibilities for development.

As well, there is a plethora of problems writ large within the broader climate justice movement. An especially compelling question raised throughout this Report is, How do we connect the dots of global capitalism to understand how particular flows of capital, goods, and resources leave behind physical markings on local communities, environments, and ways of life?

Critically, then, this question of embeddedness comes full circle at the end of this Report through efforts to understand the challenges of building a global movement to both resist and offer alternatives to the present brand of ecological reform and continuing destruction of global capitalism. For example, the group 350.org is attempting to do this, by crossing international space (working in the same diffuse way as global capitalism) but struggling to link distinct communities across international divides and in turn to move a political agenda that diminishes our shared dependence upon fossil-fuels. A central problem is convincing urbanites in Latin America teetering on the edge of survival that their daily problems of poverty (lack of water, sanitation services, displacement caused by development) are intimately connected to consumptive practices in the Global South and North that must be dramatically altered. Such an educational campaign, in part, requires that local struggles must be understood in a global context and that broad-based struggles must be related to daily challenges of survival.

But in order to seriously challenge industrialized nations in the North on these fundamental issues, the climate justice movement must begin to create new strategies and tactics that directly attack and threaten centers of power. We are at a political and organizing moment of great import. Cross-border, cross-community learning that must take place must attempt to maximize the potential for progressive change. One of the hopes of the authors of this Report is that activists in the South can teach the North how to translate long histories of militant and embodied politics into new spaces and places. It is our hope that activists North and South can learn how to use this kind of militancy to hold accountable those who are profiting from the climate crisis.

Nicole Fabricant is an Assistant Professor of Anthropology at Towson University in Maryland. She is author of Mobilizing Bolivia’s Displaced: Indigenous Politics and the Struggle Over Land (UNC Press, 2012).