In Peru and Argentina, local communities are mobilizing to halt mega extraction projects, creating new models for movement building based in the defense of the environment.
Tweet
Raúl Zibechi
September 28, 2014 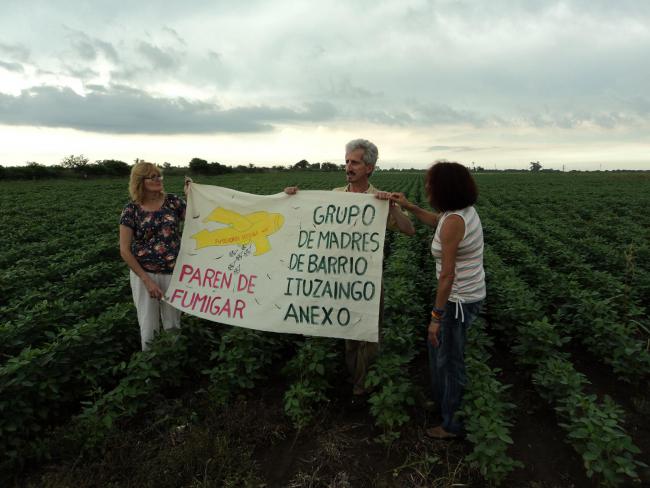 From the Andean mountain range to the flatlands of the Amazonian jungle, from the Argentine Patagonia to the north of Mexico, a clamor has arisen from the depths of Latin America in defense of land, water, and commons. I’m talking about the resistance to big mining companies like the Conga mine in Peru. I’m talking about resistance to mega hydroelectric dams, like Belo Monte in Brazil. And about conflicts over the millions of hectares of soybean monocultures that displace farmers and indigenous people, and that pollute, usurp territory, and make daily life impossible for millions.

The sustained increase in the prices of commodities in the last few years has given rise to the mass arrival of multinationals in Latin America. Strictly speaking, it’s more about speculation than about productive investment—the multinationals take away the wealth and leave environmental liabilities with no benefit for the region. Now these enterprises are being questioned by those who suffer from their presence, turning the defense of the environment into one of the main areas of social conflict.

These resistance movements originate among those who suffer directly from the extractive model—originally in rural areas, but more and more in the cities. They are a multitude of small groups, at times entire towns, and almost never big unions or political parties. They might be called community resistance movements: collectivities that are rooted in the land from which the multinationals wish to expel them. These are people who have deep connections to nature and to their neighbors who inhabit the same space. They don’t form big organizations, but rather small circles in which everyone is and feels equal. This mode of organizing is a legacy of the cycle of struggles from the 1990s that brought about a way of doing things that we now call “horizontalism.”

According to the Observatory of Mining Conflicts in Latin America (OCMAL), there are more than 206 active conflicts that have to do with mega-mining in the region. Peru, Chile, and Mexico are at the top with 36, 35, and 34 conflicts respectively. Argentina follows with 26, Brazil with 20, and Colombia with 12. In Peru, the conflicts caused two government cabinets of Ollanta Humala to fall and led to the militarization of many provinces. Socio-environmental conflicts between 2006 and 2011 led to the death of 195 activists in the Andean country.

Resistance to mining is especially significant in Peru, Chile, and Argentina, where communities and movements have won some important victories. Since 2011, resistance from the Cajamarca population in northern Peru impeded the Conga mining project from moving forward. In Argentina, the Union of Citizen Assemblies (UAC) was created, in which assemblies from more than 70 localities participate to resist strip mining. In Chile, it has been over a year since resistance against the mining company Barrick Gold, which exploits the Pascua Lama mine on the Chile-Argentina border, got the justice system to paralyze the project on the grounds of environmental damage.

In Cajamarca, Peru, the local population opposes the Conga gold and silver mining project of the mining company Yanacocha, owned by the U.S.-based Newmont Mining Corporation and Peru-based Mina Buenaventura. The company, for more than 20 years, has been mining another gold deposit situated roughly 30 miles from the city of Cajamarca, at a height of more than 11,000 feet. It is the second-largest gold mine in the world.

Because of earlier disputes between local residents and Yanacocha, the population near Conga already knew the company well, and began mobilizing in defense of its water prior to the new mine’s construction. The main point of contention for Peru’s mining resistance movements is that mining activity, which includes the use of cyanide and mercury, adversely affects the high-altitude lakes from which the nearby communities and cities get their water.

Left without land and water, peasants are utilizing a great variety of resources to forcefully mobilize their communities. They have created provincial and local defense groups, organized municipal and provincial consultas (popular referendums), and have marched and shut down parts of the region with strikes and highway blockades. One of the most important activities is that of the rondas campesinas (campesino patrol groups), communal organizations for self-defense born in the 1970s in Cajamarca and Piura in order to combat the theft of cattle. The rondas campesinas get their name from the word “rondar,” to guard or keep an eye on, a nocturnal activity in which all families in the community participate on a rotating basis. There are an estimated 200,000 to 250,000 campesinos organized into roughly 8,000 patrol groups throughout Peru. In Cajamarca, the main hub of the groups, there are roughly 100,000 campesinos actively organized.

The rondas campesinas have become a key part of the resistance movement against mining. The ronderos camp out in big groups on the outskirts of the lakes impacted by the mining project, in order to guard and impede any work from the company in the area. Today’s ronderos are called “guardians of the lakes.”

In Argentina, resistance to extraction takes on many forms, and is building momentum in response to the diffusion of agro-industry. Raúl Montenegro, biologist and winner of the Right Livelihood Award, describes Argentina’s “current extractive agricultural model” as an “extended variant of mega-mining,” in a 2012 Ecoportal article. He argues that it is not metals, but nutrients, that are extracted from the crops, which are then exported as grain. While mining leaves sterile deposits and mineral trails, industrial agriculture “leaves disseminated accumulations of pesticides that persist for years and decades.” This other instance of mega-mining finds a home in today’s widespread use of both genetically modified seeds and aerial fumigation.

As documented in a report from the first national meeting of Physicians from Crop-Sprayed Towns, during the growing season of 1990, Argentine fields were sprayed with 35 million liters of pesticides. In 2010, agribusinesses consumed more than 300 million liters of different poisons. And the figure grows every year. According to the report, there is ample evidence demonstrating the deteriorating health conditions in areas of high rates of agrochemical use.

The best-known case of resistance to fumigation is that of the Ituzaingó neighborhood, in the city of Córdoba, Argentina. As Sofía Gática, founder of a collective called the Mothers of Ituzaingó, told me in 2013, Ituzaingó is surrounded by soy crops, and the water in Ituzaingó’s tanks is polluted with pesticides as a result of nearby aerial fumigation. Three hundred of their five thousand inhabitants have cancer, 80% of the children have pesticides in their blood, and 33% of the deaths in the neighborhood are due to tumors.

The Mothers of Ituzaingó, a small group of 16 mothers whose children suffered the consequences of the fumigation, began the campaign “Stop Fumigating” in order to publicly denounce the situation in which they live. In April 2012 Gática received the Goldman Prize, one of the most important awards in the world for people who fight for the environment. In June of that year, the Mothers were able to take the people responsible for the fumigation to court. It was a first for Argentina. On August 21, Córdoba’s Criminal Court found one producer and one fumigator guilty of adversely affecting the health of the population.

In another agro-industrial horror, in June 2012, Argentina’s president, Cristina Kirchner, informed the country of Monsanto’s intentions to install an enormous factory of genetically modified corn in the city of Córdoba. Soon after, the inhabitants of Malvinas Argentinas, a town of 12 thousand people, began mobilizing. They created the Neighborhood Assembly of Malvinas Fights for Life. In September of 2013 they began an encampment in front of the location where Monsanto planned to install 240 silos of genetically modified corn seeds with the goal of reaching 3.5 million planted hectares.

The encampment turned into an information and formation center. Participants carried out dozens of workshops: permaculture, neighborhood construction, organic seed cultivation, alternative medicine and nutrition, recycling, group interaction and games, among many others.

In addition to their regular activities, they also carried out protests outside of the encampment: legal complaints, festivals, seed exchanges, artistic interventions, radio, street theater, and talks. In a November 2013 column for Ecos Córdoba, encampment participant Débora Padilla explained the guiding philosophy behind the encampment simply: “The encampment at Malvinas demands using the body as a form of resistance, it demands ways of co-existing and resistance in a heterogeneous panorama of people, that seeks…alternatives to the current productive/social model.”

On the weekends, when more people came together, it was easy to see them in small circles, of 10, 20 or more, making music, cooking, debating, or just being there. They felt best this way: without hierarchy, facing one another, exchanging words, energy, and ideas. It was a way of doing and of living, in which all participants maintained their individuality, but were on equal footing.

The scene at the Malvinas assembly in Argentina is very similar, save for cultural differences, to one you might imagine at a citizens assembly against mining in the Andean mountain range, of a ronda campesina, or of the groups that resist soybean fumigation in the Argentine flatlands. Where there are resistance movements to the current extraction model, there are communities, whether they use this name or not—human groups comprised of small numbers, but with strong ties, who work by consensus, and in which no one individual is worth more than the next. This is horizontalism: instances that can help us move from moments of resistance to long-term models of social interaction.

Raúl Zibechi is a Uruguayan journalist, theorist, and activist. His most recent books translated into English are Dispersing Power (2010) and Territories in Resistance (2012). Translated by Constanza Ontaneda.