A Convoluted March to Modernity

It is all too easy to find yourself on one extreme or the other regarding the inexorable march of modernity and the associated disappearance of indigenous cultures. The benefits of electricity, running water, and sewage systems are obvious, followed by literacy and education, in enabling economic development and trade in our increasingly globalized world. Tradition and indigenous identity, on the other hand, are associated with culture, spirituality, language, traje, and the beauty of diversity that should be saved and valued. By studying and visiting one community in the Bolivian Andes for over 20 years, Andrew Canessa challenges the positions of both ideals by presenting the contradictions in the community itself. He focuses on identity, or “what it means to be indigenous to indigenous people themselves,” as affected by the changes and power struggles of the wider world (p. 2). Intimate Indigeneities is an engaging read as it takes us on a journey over a generation, showing the effects that religion, education, military service and the presidency of Evo Morales have had on the lives, desires, relationships, and dreams of the Andean community referred to as Wila Kjarka. 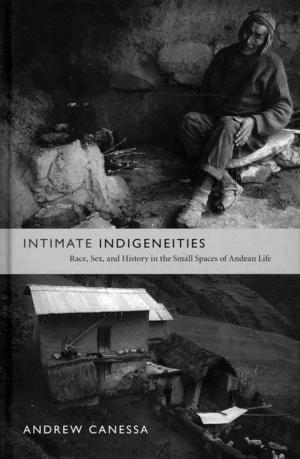 In 2007, the United Nations passed a “Declaration on the Rights of Indigenous Peoples,” which is just a small part of the ongoing battle for indigenous rights and recognition, but does demonstrate increasing political awareness of the issues. Bolivia is a particularly poignant case under President Evo Morales, who works hard to present himself as indigenous and use the political capital and recognition both within the country and internationally. However, Canessa makes a crucial distinction between being “indigenous” and being “indian.” He chooses to use the term “indian,” with the lower case “i,” throughout the book because “indigenous can roll off the tongue without too much reflection, as the speaker will be sure that no one is likely to be offended.” Indian, on the other hand, jars and offends and makes the reader stop and think and recognize the historical subaltern status and discrimination (p. 7). This distinction is central to the book because indigenous and indian represent two different worlds and ways of interacting with modernity and foreign anthropologists. “The new indigenous reality is a world less concerned with agriculture and more directed to education and market economics,” but in doing so it simultaneously erases and eclipses the way of life of people in Wila Kjarka (p. 282).

International organizations often define indigenous politics and identity by a claim of historical continuity to the original people, and then to their lands, languages, and lifestyles. Indian identity has always been defined by those who are non-indian, often through fiscal or racial categories. In contrast, the people in Wila Kjarka believe that their identity as jaqi, a word that roughly translates as Aymara, is in their way of living. They do not define identity by physical or economic attributes, but instead believe that “it is through relationships that identity is created … being jaqi is not what one is but what one does” (p. 164). In defining themselves as jaqi, they prioritize relationships with each other and the spiritual world, their labor and their way of life, but they are also aware of the discrimination and limitations they face for being seen as marginalized and backward.

The first few chapters of the book delve into this question of identity—indigenous, indian, and jaqi—by looking at the geographical and historical location and experience of this specific community in the Bolivian Andes. Canessa then looks at the way that the Wila Kjarkeños remember the overthrow of the hacendados in a local inter-community war and not the 1952 Revolution. The contrast between the official written history and the memories of the community members shows that indians have been erased from official histories, and also that the jaqi cosmovision frames their storytelling and remembering.

This chapter transitions from broad theoretical questions to focus on how the shifting forces of modernity affect the spirituality of individual community members. The middle chapters of the book look at the life cycle of the jaqi with anecdotes of the varying stages of life, and thus identity formation, from birth and naming to hair-cutting ceremonies, courtship, marriage, and death. In representing the lives of community members, Canessa presents their rituals and beliefs in contrast to the norms of the Western world. A chapter on the kharisiri, or fat-stealer, investigates the visceral fear of community members for an outsider who steals their life force, and the power of the myth in its violation of reciprocity and economic interactions.

Canessa presents Walter, the bilingual schoolteacher in Wila Kjarka, as an example of shifting identity and the contradictions of modernity. Teachers like Walter are often seen as success stories because of their education levels and non-agricultural lifestyle. However, teachers “have made a decision to leave ‘traditional’ rural life to adopt one where knowledge is obtained and valued in a very different way…. [S]uch teachers are perhaps those least likely to impart an intercultural educational program that valorizes indigenous culture because they have been so personally invested in distancing themselves from it” (p. 187). Bolivia has passed a mandatory bilingual education law, but Canessa notes that many indians believe this to be yet another imperialist trick to keep indians in their place. Bilingual education has been implemented only in indigenous communities, instead of having Spanish-speakers learn Aymara, thus turning the law into just another unequally implemented program.

Canessa argues that schooling aims to turn the indian into a Bolivian citizen, and in doing so reinforces the existing hierarchies such that “a lesson in the political geography of Bolivia becomes a lesson in indian poverty and backwardness” (p. 194). Education is highly valued and the families make sacrifices to enable their children to go to school, only to often end up without the skills to enter either urban or rural economies: “It is not simply that children spend a lot of time in school learning very little at all, but they spend a lot of time not learning about other things.” (p. 200).

After discussing the civilizing mission of education, Canessa moves on to look at the similar way mandatory military service represents and reinforces racial, linguistic, and cultural hierarchies. In Wila Kjarka, both education and military service make a man more attractive as a husband, but along with increased Spanish and patriotism, these public institutions impart a sense of inferiority and Western norms. Being part of the military means that “men have a heightened sense of their (inferior) indianness as they move through national institutions and spaces, while at the same time they are ‘whitened’ by this very movement and association” (p. 242). These men return from military service ambivalent and conflicted by their experiences; the service creates a gendered hierarchy where Spanish whitens and masculinizes, and where women have to fulfill traditional men’s roles while the men are away. In this way, military service directly changes the soldiers, but also changes community relationships and identity politics in aspects of daily life from market economics to domestic violence.

The themes of race and sex run throughout these chapters on kharisiri, education, the military, beauty pageants, and revolution. The focus on “intimate” topics brings challenges as jaqi rarely discuss topics such as courtship, but also means that as readers we have a sense of the Wila Kjarkeños and their fears and desires. Canessa discusses topics as diverse as pornography and doll-making, cannibalism and metal flagpoles, and places them in the nexus of historical, national, cultural, racial, and sexual politics, bringing the background to the front in providing a view of a community in transformation. As he describes it, “large and remote power relations are reproduced through something as simple and innocent or as damning as a kiss” even while noting that kissing is not a part of courtship or romance in Wila Kjarka (p. 25).

Canessa does not offer guidelines or suggestions; rather, he often seems as conflicted as the Wila Kjarkeños themselves about modernity and identity and the rapid pace of change. He resists the temptation to idealize the jaqi; for example, he notes that they have an intimate connection with nature, but notes that they are not environmentalists in any sense. He closes the book by looking at a new indigenous modernity and the death of Wila Kjarka’s shaman and his replacement, who participates in a shaman’s union. The power of the ending comes from feeling as if this community and the jaqi lifestyle are disappearing even as the transformations continue, and the book is our best look at identity and generational shifts. The book is valuable for any study of modernity, indigeneity, or interpersonal relations as it provides a poignant look at a community in the midst of a convoluted, contradictory, continuous march to modernity.

Naomi Glassman has an BA in Latin American Studies from Swarthmore College and currently works as NACLA’s archival intern.