Defending the Right to Health in Colombia

Almost 20 years ago, Colombia began a series of neoliberal reforms that gave control of the health care system to private insurance companies. Public hospitals were defunded, rented out, transformed into for-profit health care institutions, or closed down. Now, in partnership with development corporations, the Colombian government proposes to “rescue” Bogotá’s historic San Juan de Dios hospitals by transforming them into a huge, state-of-the-art medical complex in the heart of the city’s downtown. The new compound is dubbed Health City and is representative of urban-renovation projects across the world that claim to renew and beautify depressed neighborhoods, gentrifying abandoned and dangerous city centers by integrating them into the flows of global capital. Now in the second phase of economic-feasibility studies, Health City will offer specialized medical services at competitive international prices, hoping to reach the growing sector of medical tourism from wealthy countries. But the biggest Health City investment will not be in facilities or equipment. The project proposes to transform the low-income neighborhoods surrounding the hospitals into condominium complexes and hotels. Residents are being forced out of their homes by the increasing costs of utilities and infrastructure projects, such as widened roads and public-transportation hubs. Given the predicted and substantial increase in land value, the most enthusiastic investors in Health City will come from the construction sector.

The San Juan de Dios hospitals, considered national patrimony, were the bustling medical heart of Colombia for almost four centuries until they were intentionally left to decay: defunded and abandoned in the wake of the neoliberal health care reforms that destroyed public hospitals across the country. The general hospital of San Juan de Dios was closed in 1999. The Mother and Child Institute—the oldest maternity hospital in the country and part of the San Juan de Dios medical complex—remained open for a few years out of the workers’ commitment to the institution. 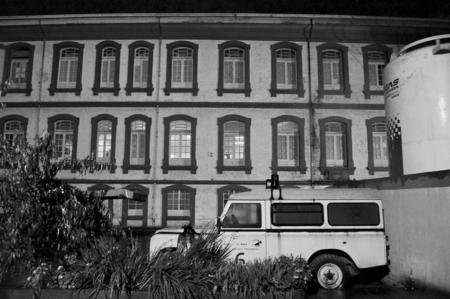 Today, the roof of the general hospital has caved in. The Mother and Child Institute is filled with rows of dusty, empty incubators. Outside, an ambulance with flat tires rusts near the old emergency-room entrance. In the name of progress and development, Health City will “clean up” these haunted spaces. The people who live in the surrounding neighborhoods and the former longtime hospital workers will be displaced to the unincorporated fringes of the city. With the Health City project, the San Juan de Dios hospitals will be transformed into a walled oasis for the rich and a haven for the for-profit health care industry, urban development corporations, and the financial sector.

But some former workers of the Mother and Child Institute have been resisting the privatization of the health care system and occupying some floors and wards in protest. They are demanding their pensions, legally mandated severance pay, and the months of unpaid wages they were owed when the institute closed. The hospital occupation, which began in 2006, challenges the profit-led decision to eliminate the most important birth center in the country, a hospital that provided crucial, high-quality care to poor women and their children.

For 19 years, Angela—who like others in the occupation asked for her real name not to be used for fear of reprisals—worked at the Mother and Child Institute’s day care center, and then as a secretary. Her career at the institute allowed her to put a down payment on a home and support her three children through school.

Then one August morning in 2006, Angela arrived at work to find the hospital locked. Overnight, the Mother and Child Institute had been closed and the workers were told their positions had been eliminated. A liquidator hired by the state, Ana Karenina Gauna, told the workers that restructuring the hospital to make it competitive required a significant reduction in personnel. In order to be rehired by the new institution, they needed to sign resignation letters.

“When we arrived at her office, it was horrible. She would say, ‘What do you want?,’ and you would say, ‘Well, I have been working here for 20-something years.’ And she would say, ‘How old are you?’ I am such and such, and she would say, ‘You have the right to nothing; sign,’ ” says Natalia, a registered nurse who worked at the institute for 19 years. “When you looked at that resignation letter, it said that you were leaving voluntarily.” The media reported the news as if the workers had left on their own. Natalia signed on December 26, 2006, only after resisting for five months.

Hundreds of workers, many weeping and panicked, signed. In doing so they gave up their rights to the social security benefits guaranteed by their union, including pensions that began after 20 years of work. Some, only a few months or years away from retiring, lost their retirements. Some of the severance packages amounted to just one peso, less than five U.S. cents. Only a few workers were rehired. When Sergio—who worked as a nurse’s assistant for 29 years—lost his job at the institute, he lost his pension and could not find work elsewhere. “We are too old to be hired anywhere else and too young to go home and die,” he says. Many have been unable to find work. Angela, Sergio, and many others lost their homes.

A group of workers refused to sign and occupied the ground floor of the hospital in protest. The city government responded by sending in police. The assigned liquidator rented out two floors of the hospital to another city hospital that was already running with a clear for-profit administration. Confrontations and negotiations with the police and the state liquidator continued. Police have forcibly entered the hospital several times and often with batons, and once they even arrested two female workers. There are constant rumors of impending raids, and occasional violent confrontations when the police attempt to remove them. So far, the occupation has survived. 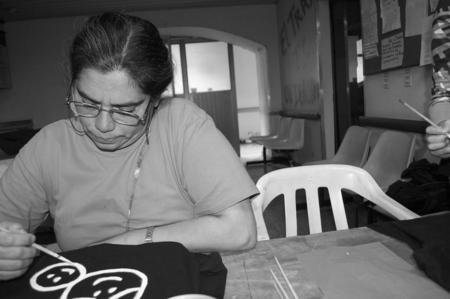 The occupation is composed mostly of women in their forties and fifties. Some days, there are as many as 50 workers guarding the hospital, some wearing their old scrubs, but most days there are fewer than 10 women representing the 1,700 workers whose contracts were terminated when the hospital closed. They sit quietly in plastic waiting-room chairs and cook on a small tabletop range; there is often not enough money to buy meat or vegetables. The workers maintain a constant presence, sleeping night shifts in hospital beds in the abandoned emergency room or arriving early in the morning. Some have found other work, but most are unemployed. A former physical therapist sells her handicrafts for a few extra pesos a month. Sergio now drives a bicycle taxi. It has not been easy.

“We’re old, we’re used to kicks from the police, we’re used to blows from their batons and the water they shoot at us,” says Sergio. “We have thick skins now, it doesn’t hurt us anymore. What hurts us is the violation of the fundamental rights of children who have been crushed since they closed this hospital.”

Before it was closed, more than 800,000 babies were born in the Mother and Child Institute. As an important research and training center for medical students, gynecologists, and pediatricians, the hospital helped reduce maternal and neonatal mortality rates nationally by providing free medical care to poor families with high-risk pregnancies.1 It was the site of numerous medical innovations, including the internationally renowned Kangaroo Care Program, exported worldwide and recognized as an effective intervention to increase survival of premature and low birth weight babies.2

But in 1993, the Colombian government began to privatize the health care system, and structural-adjustment policies reached public and university research hospitals across the country. The reforms transferred the administration of all health care services from the state to private insurance companies.3 Public health programs, including vaccinations, were dramatically reduced or eliminated, and there was a sharp increase in mortality rates nationwide. Preventable deaths in children under five rose dramatically, from four to 15 per 100,000 children.4 Many consider the health care crisis that began with the reforms and continues to the present to be the worst in Colombian history.

At the Mother and Child Institute, workers used their own money to buy patients’ medications and medical supplies. They worked for months at a time while waiting for delayed paychecks. When the institute closed without warning, the workers were still owed seven months of unpaid wages.

“We never started out by asking if someone could pay or not. The first thing we worried about was the patient’s health,” says Mariana, a former nurse’s assistant at the institute. “Sometimes there were even people whom we never charged anything at all, not a peso, and we took good care of them. Today we don’t treat people like patients or even human beings. The first thing is to figure out if you have enough money to pay for the consultation. And if you don’t, you can die in the doorway.”

Millions of Colombians face insurmountable economic, geographic, and administrative barriers to care, and when treated, they often do not receive adequate care.5 The National University, the most important institution of higher learning in the country, no longer has a designated teaching hospital. Meanwhile, the insurance companies responsible for the health care system are embroiled in a series of dramatic corruption scandals and are under investigation.6 Health City, expected to be a tax-free zone, is another example of the formal subordination of the Colombian state to national and transnational private for-profit interests that would have absolute financial and administrative control over the hospital complex, with no regard for the health of Colombians.

“We are here fighting so that this institution continues to be what it was, for the poorest of the poor, the people without resources,” explains Angela. The workers are guarding public space against privatization: arriving daily to the abandoned wards to protect what they consider national patrimony. Their presence is a protest against unjust labor law and the slow destruction of the public health care system and the right to health in Colombia.

César Ernesto Abadía Barrero is Associate Professor of Anthropology and Public Health at the Universidad Nacional de Colombia. Emma Shaw Crane was a Fulbright Scholar in 2010 with the Critical Medical Anthropology Group at the National University of Colombia in Bogotá. Héctor Camilo Ruíz is a photographer and anthropologist with the Critical Medical Anthropology Group and a founding member of En Espera, an artists’ collective in solidarity with the workers of the San Juan de Dios hospitals. For more information on the state of health care in Colombia, download this report. Ruíz recently produced this multimedia piece on the occupation. He can be reached at cesarernestoabadia@gmail.com.