Mario Benedetti, 1920-2009, was a distinguished Uruguayan poet and novelist. He was a member of the Latin American literary generation that included Carlos Fuentes, Julio Cortázar, and Gabriel García Márquez. Here, he reflects on the horrors of Argentina’s “dirty war” of the 1970s and 1980s, and on the necessity of remembrance. This essay was published in Volume 29 Number 3 of the NACLA Report, November/December 1995.

The terrifying revelations made by a navy captain of the “death flights” carried out during Argentina’s dirty war show that memory will always fight to come to the surface. Consigning it to oblivion is pointless, hypocritical and perverse. A scandal was unleashed in Argentina in March in the  wake of the terrifying revelations made by corvette-ship captain Adolfo Scilingo of the practice  of throwing men and women to  their death from airplanes during  the military dictatorship (1976-83). That scandal gives rise to more than  one interpretation. Of course, the  first of these has to do with horror. 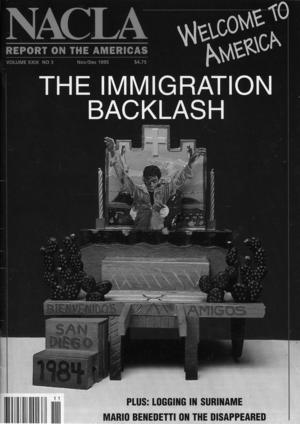 Just months earlier, in October, 1994, two captains (Antonio Pernias and Juan Carlos Rolón) admitted before the Argentine Senate  that torture had been frequently employed in interrogations of political  prisoners. They referred to these punishments, though, in a generic  way, giving few details, characteristics, or other particulars.

They thus provoked in the imagination of every citizen images of  kicks, slaps, the plantón (being forced to stand up for hours on end), the “submarine” (being held under water until near suffocation), the electric wire, and other varieties  of excessive cruelty. It is true, however, that these declarations did not shock anyone. It is public and notorious that here, there, and everywhere, human rights are violated, preferably those of human beings  on the left.

Even so, the case of Captain  Scilingo is something quite different. In his by now well-known confession to journalist Horacio  Verbitsky, which was disseminated  not only in Verbitsky’s book, The  Flight, but also in the press and on television, Scilingo doesn’t just talk  about the obvious and routine  generalities of torture. He goes into details, characteristics, and other  particulars.

Prisoners were notified of a simple and even promising transferal. They were given strong sedatives  that they were told were vaccines, and then put on a plane. After being  injected with even stronger sedatives, they were thrown, unconscious but alive, into the ocean.

The testimony of the corvette-ship captain is one of flabbergasting realism. He himself was so involved in the actual operation that during one of the flights, in the  midst of throwing prisoners out of the plane, he slipped near the small  door and was close to accompanying them in the lethal fall to the sea.

The irony does not end there. After each of the punitive flights,  priests “comforted the officials  with scripture from the Gospels about the necessary separation of the wheat from the chaff.”  Everything was so peculiarly ethical that the doctor who administered the soporific injections did  not participate in the act of letting  the bodies fall into space in order  not to violate the “Hippocratic oath” (which is not, as one might  think, the father of hypocrisy, but of  medicine).

At the same time, the captain  knows how to use his computer to do the calculations. He personally  participated in two of these lethal  flights, but he says that other similar flights were carried out every Wednesday over the course of two  years. If 15 or 20 prisoners were  eliminated in this way every  Wednesday, the total number of  victims would be around 2,000.

As is to be expected, different  sectors have reacted to the disturbing revelation in different ways. Suddenly, the various human rights organizations, the Mothers of the  Plaza de Mayo, relatives of the disappeared, intellectuals, artists, and  even bishops see all their denunciations confirmed. They are demanding that the armed forces provide a  complete list of those killed in the  lethal flights.

The permanent commission of the Argentine episcopate, for its  part, clarified that “neither the  Argentine episcopate nor its authorities were ever consulted about  the correctness or viability of the  denounced procedures for the  elimination of the detained, nor  did they ever give any form of  consultation.” The second vice-president of the same episcopate, however, admitted that, “the  Church has always accepted that, while it is holy, it may give shelter  to sinners who are in need of repentance.”

The second and perhaps most  important reading of the surprising and self-incriminating testimony is that from now on, no one can any longer close their  eyes before the evidence of a monstrous collective blame. The much  sought-after amnesty laws of “due  obedience” or “full stop,” passed  under President Raúl Alfonsin in 1984 and 1987 respectively, are  now confirmed as a flagrant injustice that can never be erased.

Given the connivance and the  fraternal alliance between the repressive forces of Argentina, Chile, Uruguay, Paraguay, Brazil and  Bolivia, Scilingo’s revelations also  implicate the entire region. A case  in point is Uruguay’s sadly  renowned Law of Termination of  the Punitive Pretension of the State (a true verbal macramé to cloak an amnesty law for the torturers). The  true character of that law, which  was sponsored and implemented during the first government of current president Julio Maria  Sanguinetti (and approved in a  contentious plebiscite in 1989)  becomes clear thanks to the captain’s testimony.

It is always a bad symptom when  a ruler tries to base his or her  power on collective amnesia. It  must be prohibited to look backward, they decree; it is necessary to  always look forward. One should  not have “eyes in the back of one’s  head” (as President Sanguinetti  once said in reference to the organizers of the referendum campaign  against the amnesty law, whom he  accused of stirring up old hatreds  and conflicts).

The superficial meaning is that  we should not cultivate hatred or vengeance. That’s not bad. But the hidden meaning is  that we should renounce  being just, that the essence  of justice should disappear  along with the disappeared. No country, however, can  construct a true peace if it has  a sinister past pending.

From a psychological point  of view, the character of  Scilingo merits profound  study. The psychologist Laura Bonaparte, one of the Mothers  of the Plaza de Mayo, overcoming her own tragedy (the military killed her ex-husband, her two daughters, her two sons-in-law, her son and  her daughter-in-law), offers  a profound analysis in the  March 12, 1995 edition of  the Buenos Aires daily  Página/12. She tries to explain why Scilingo could recuperate some elements of his humanity:

An ideology like a militarist one  forces you to encapsulate your  own subjectivity through rationalizations that justify your actions. They are inventions, let’s say, to  convince yourself. So all the characteristics that make a military officer human are blocked out. The  history of each person may be different, depending on the sensibility with which he or she has been  raised. I doubt that the encapuchados [“the hooded ones,” unidentified military personnel who have  violently protested the human  rights trials of military officials] had been human at any time. The  person who was able to unblock  him- or herself was able to do so  because he or she had a human  drive to identify with another  human being.

She adds: “What Scilingo did cannot be changed, but he did reveal  one great truth. He cannot give life  back to our loved ones. He has  proven us right. The human rights  organizations are no longer the  crazy men and women.”

A young Uruguayan poet, Rafael Courtoisie, wrote this poem of just two lines  some time ago: “One day, all the elephants met to forget/All of them, except one.” Now it was Captain  Scilingo. On another occasion, it  could be someone else.

There will always be an elephant  who cannot bear the pressure of his  or her conscience and decides to  tell the truth. Society will have a  hard time forgiving that person but, just the same, it will be grateful for  his or her sincerity. Society, or at  least its most dignified part, will  not demand revenge but justice  and, above all, information.

A few hours after the confession  of the corvette-ship captain, ten  young people who in the midst of  the military dictatorship had been  adopted by various couples called  for an investigation into their true  identities. The public debate made  them realize that they might be  children of the disappeared.

It is curious that the top military hierarchy, as well as  President Menem, fervently  disqualify the testimony of Scilingo only because at one point he acquired a stolen car.  Yet they are not concerned  that hundreds, or perhaps  thousands, of officials who  stole lives are not in jail. Does  this mean that for the canons  (cannons) of a consumerist  and neoliberal society, the purchase of a stolen automobile  represents a more treacherous crime than the ominous throwing into the ocean of 2,000 citizens who had not even received a trial?

The flights were based on a  fiction: that their existence  could be forgotten, and the  perpetrators exonerated of  blame. Four years ago, when President Menem pardoned Massera, Vida, Viola, and Camps—the leaders of the dictatorship—I wrote that, “the  pardoning of the crime reenacts the  crime.”

Fear may spread and even overcome an entire society, but fear is  never democratic. Neither fear nor  amnesia is democratic. It was for a  reason that Jorge Luis Borges, who lived through stages of incredible  blindness before the glare of the  sabers, nonetheless left this quotation that is almost a revelation: ”Only one thing does not exist. It is  forgetting.”

From the well-known Dreyfus case  (it was recently the hundredth anniversary of his scandalous conviction) to today, forgetting has always  been filled with memory. This memory has always fought to come to the  surface in order to show the world  that consigning it to oblivion is pointless, hypocritical and perverse.

Memory is so important that, to  paraphrase Courtoisie, if just one  elephant remains that remembers, that memory can change an entire  country’s history.