Since at least 2004, the Washington-based NGO Freedom House has been clandestinely nurturing and organizing the opposition to Venezuela’s President Hugo Chávez with funding from the U.S. government, according to documents released by the U.S. Agency for International Development (USAID).1 The documents were released in January almost six years after they were requested under the Freedom of Information Act (FOIA) and arrived, in FOIA lingo, in a “sanitized” and “highly redacted” form, meaning that much of the text has been censored, and a little less than half the words on most pages are grayed out. In USAID’s effort to withhold the truth about its activities in Venezuela, the agency invoked FOIA Exemption B4, which is meant to protect trade secrets. 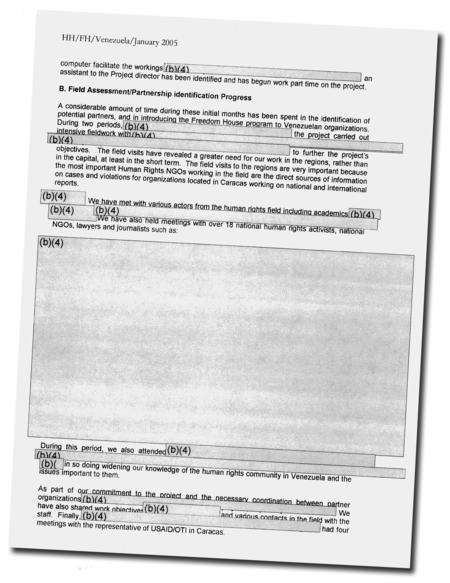 A January 2005 quarterly report from Freedom House to USAID funder

The eight documents are quarterly reports from Freedom House to its USAID funder detailing the progress of its activities under a grant program called the Right to Defend Human Rights in Venezuela. Despite the redactions, the released portions of the first report clearly indicate that one of the project’s original goals was to embarrass the Venezuelan government internationally by bringing human rights cases from Venezuela into the hemispheric arena of the Inter-American Commission on Human Rights for eventual litigation in the Inter-American Human Rights Court.2 There is no mention of this project on Freedom House’s website (freedomhouse.org).

Although the reports cover the period from October 1, 2004, to December 31, 2006, Viviana Giacaman, Freedom House’s director for Latin America, said in an e-mail that the Venezuela project continued until November 2011.3 It has yet to be determined whether this operation was superseded by another Freedom House or U.S.-funded operation. It is, however, very likely, especially during this critical election year in both Venezuela and the United States. USAID declined to comment.

“We have held meetings with over 18 national human rights activists, national NGOs, lawyers and journalists,” states Freedom House’s first quarterly report.4 Also in that first quarter, Freedom House met four times in Caracas with USAID’s appropriately named Office of Transition Initiatives (OTI), the USAID entity associated with regime change. OTI was simultaneously handling the operations of several other NGOs in Venezuela, so Freedom House–OTI meetings would have been used to coordinate and avoid duplication of effort and funding.

A quarterly report from late 2004 described rapid progress: “While initial contacts, meetings and presentations have enabled us to get a foot in the door of Venezuelan human rights organizations, it is clear that a considerable amount of work will still need to be done to guarantee partnerships and ensure trust and collaboration by Venezuelan organizations.”5

Under the heading “Program Results in the First Quarter,” project directors announced that by the end of 2004, Freedom House had more than 20 NGOs, as well as three human rights groups and five human rights journalists “on board.” The second report, dated January–March 2005, is longer and even more redacted than the first, but even so, we learn that Freedom House again coordinated with USAID/OTI in Caracas, where they discussed “training needs, upcoming training opportunities by the project, and the current developments in the operating context of the country.”6

At the time and over the last decade, USAID/OTI simultaneously funded several other opposition NGO operations in Venezuela; however, the agency has refused to release their names of the recipients.7 According to the evidence compiled by U.S.-Venezuelan attorney Eva Golinger in The Chávez Code: Cracking US Intervention in Venezuela (2006), the U.S. government was also funding dozens of NGOs in Venezuela through yet other mechanisms, such as National Endowment for Democracy (NED), the Development Associates International, the National Democratic Institute, and the International Republican Institute (IRI).8 No doubt there was even more clandestine funding by the Central Intelligence Agency and various Department of Defense entities, but how much may never be known. These U.S. government funds were not chump change: They represent millions of dollars per year through a series of intertwined channels to dozens of local NGOs and others with the aim of undermining a democratically elected government.9

By the end of the second quarterly report, some 25 NGOs, a university, and the previously mentioned five journalists were “on board.”10 Meetings with activists, lawyers, and journalists were often held outside Venezuela, in Guatemala (March 2005), Mexico (March 2005), Peru (June 2005), Colombia (2006), Chile (2006), and possibly other locations. In at least one case, Venezuelan Freedom House–trained activists were brought to the United States.11 There are reasons for holding these false-flag meetings in third countries outside of Venezuela: They help obfuscate U.S. government involvement and provide added protection for the attendees, because they take place out of the country. They are also a not-so-subtle way of attracting more participants. After all, who wouldn’t line up for an all-expense-paid trip abroad?

By the end of its first year in Venezuela, Freedom House was able to brag that it now had on board “more than 50 human rights defenders working in 29 different NGOs from all over the country.”12 By the second year, Freedom House boasted that it was completely in place, supporting “human rights organizations and practitioners through legal and technical advice on their cases . . . and supplying technical support equipment.” Now it could expand into bringing journalists on board.13

“The second year will include a broadening on the project’s target audience, in order to reach out to other actors who can affect the human rights environment. Freedom House will work with journalists,” the document stated.14 From June 1 to June 6, 2006, Freedom House organized an investigative journalism workshop that, according to Freedom House, was attended by “12 different journalists from the most important media.” Many of the leading national newspapers and two television channels sent representatives.15 Freedom House’s relationship with the Latin American journalists serves to “help” journalists frame and decide upon which news they will report and to cement U.S. government influence and coordination with not only reporters but also with the local elites who own the newspapers and must usually grant permission for their journalists to attend such events.

By the fifth quarterly report of spring 2006, unifying the opposition—or as the report put it, “building alliances among Venezuelan groups”—was a new issue on the forefront of Freedom House’s ever expanding project in Venezuela.16 While Chávez was reelected by an overwhelming 63% of the vote in the 2006 presidential elections, unifying the still fractious opposition in the lead-up to the vote had become a major part of U.S. strategy, and Freedom House was an essential conduit for achieving this.17

Six years later, Freedom House’s U.S.-backed effort appears to have paid off. After winning the election primaries in February, Henrique Capriles Radonski of the Primera Justicia party became the single opposition candidate, with a new, relatively stable opposition coalition behind him. But given Chávez’s ability to mobilize the electorate, even when he is undergoing chemotherapy, a Capriles win is still a long shot. On the human rights front, only one case championed by Freedom House in Venezuela has gone before the Inter-American Commission on Human Rights, according to Freedom House director Giacaman.18 It is unclear whether that case was recommended for judicial review in the court.

Of course, defending human rights in Venezuela or anywhere else is an unassailable concept that few would disagree with. The issue here is that the wherewithal to “defend the defenders,” as the USAID grants put it, is secretly coming from the United States, a hostile government bent on regime change in Venezuela.19 Arguably, this is offensive and not defensive behavior on the part of Freedom House. Indeed, the eight highly redacted quarterly reports are noteworthy because they appear to be a blueprint for a relatively cheap insertion of U.S. policy into the internal affairs of a sovereign nation, in this case, Venezuela. The documents highlight the Freedom House’s recruitment of local activists, lawyers, and journalists in order to further the U.S. government’s strategic goals of the United States government.

All countries have a need for concerned citizens to actively monitor and follow up on human rights cases. Venezuela is not unique. But who should pay for this vigilance and who should conduct it? And where are the lines of national sovereignty drawn? Should accountability be handled openly and transparently through known international or domestic bodies, or funded clandestinely as it is now by that country’s enemies?

Jeremy Bigwood is an investigative reporter whose work has appeared in American Journalism Review, The Village Voice, and several other publications. He covered Latin American conflicts from 1984 to 1994 as a photojournalist.

1. All eight Freedom House quarterly reports to USAID are available at archive-research.com/USAID-FH.