The Historic Strategies of the Latin American Left 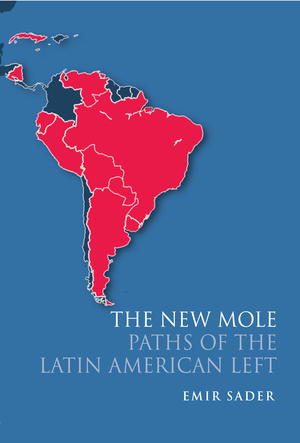 This slender book is a major contribution to our understanding of the Latin American left by Brazilian political scientist Emir Sader, who came of age politically in São Paulo when the Cuban Revolution exploded on the doorstep of the United States, changing forever the nature of the continental political debate. He takes us on a journey through history to better grasp the problems that have buffeted the left and the limits of its political strategies.

“Although a continent of revolutions and counter-revolutions, Latin America lacks the strategic thinking it needs to orient its rich variety of political experiences,” writes Sader.

The mole of Sader’s title is a metaphor borrowed from a passage in Karl Marx’s Eighteenth Brumaire of Luis Bonaparte that Sader employs to describe the persistence of the Latin American left despite its theoretical and strategic limits. For Sader, the left in Latin America is like the mole that is constantly borrowing underground and popping up in the least expected places and times.

Sader starts his historical analysis in the 1930s and depicts three main political strategies of the left that roughly correspond to three major periods. First came the nationalist, populist, and reformist governments of Latin America, as initially represented by Getúlio Vargas of Brazil and Juan Domingo Perón of Argentina. The Communist parties were influential in many countries in this early period, particularly in the trade union and workers’ movements. But given their loyalty to the Third International, they mistakenly classified the Vargas and Perón governments as fascist, often collaborating with the right-wing opposition and even the United States in opposing these populist regimes. In Chile, where no strong populist military figure emerged, the communist and socialist parties successfully formed a popular-front government with centrist political parties led by President Pedro Aguirre Cerda (1938–41) that carried out a series of reforms.

Starting in the 1930s the development model—which was later characterized as import substitution industrialization—served as the economic foundation for these political regimes. By erecting import barriers to the manufactured commodities of the dominant imperial nations, Sader writes, “Latin America changed in a way unprecedented in its history, whether in terms of the development of its productive forces, the shaping of its basic social classes (aided by greater state regulation, welfare provision, and intervention to stimulate production), or the elaboration of national projects.”

But by the late 1960s and 1970s, this “long cycle of Latin American growth [and] stability gave way to big social and political upheavals, including military dictatorships, guerrilla movements and revolutionary victories.” The economic model began to exhaust itself as inflation took hold in many countries and the working and middle classes became more disgruntled. This coincided with the triumph of the Cuban Revolution. For Sader and the left, it marked the advent of the second left strategy—the guerrilla. A chain of guerrilla movements committed to anti-imperialism and socialism extended from Bolivia and Peru in the south to Venezuela, Guatemala, and the Dominican Republic in the north. The defeat of Che Guevara and his band of guerrillas in 1967 in Bolivia temporarily stymied the strategy of using rebellion in the countryside to seize power.

Armed struggles then shifted to the urban areas, particularly in Argentina, Brazil, and Uruguay, marking a second phase of the guerrilla. Chile, with the Popular Unity government of Salvador Allende (1970–73), attempted to push the reformist political strategy of the previous period to its logical conclusion by using democratic elections in an effort to remake the state and the economy along socialist lines. As Sader (who lived in Chile in 1971) relates, holding executive power by winning the presidency was not sufficient to ward off the military coup in 1973 fomented by the bourgeoisie and the U.S. government.

The guerrilla strategy appeared viable once again in 1979 with the Sandinista victory in Nicaragua and the growth of guerrilla insurgencies in nearby El Salvador and Guatemala. But U.S. intervention to support the militaries and the Contras in Nicaragua hindered this third phase of the guerrilla. Meanwhile, two historic shifts were occurring globally: the move “from a bipolar world to one of unipolar, imperialist hegemony, and from the regulated [developmental] model to the neoliberal one,” writes Sader. Latin America became “the laboratory of neoliberalism,” Sader notes. “Here it was born, here it spread and took on its most radical forms.”

In the neoliberal era, finance capital reigned supreme, the regulatory state was dismantled, the working class was battered, and a market ideology of consumerism and commodity fetishism gripped the fragmented populaces. Reformist parties and politicians who had pursued development policies in the previous period now wholeheartedly embraced neoliberalism. Presidents Carlos Andrés Pérez in Venezuela, Carlos Menem in Argentina, Carlos Salinas de Gortari in Mexico, and Fernando Henrique Cardoso in Brazil all jumped on the neoliberal bandwagon.

It is this phase of neoliberalism that preoccupies Sader. Although the neoliberal model became hegemonic, it had critical weaknesses from the beginning. Its promised economic fruits were limited as growth rates were much lower than those of the developmental era, and economic inequality became even more pronounced. “The continent suffered a neoliberal hangover,” writes Sader, making it rife for popular rebellions and eventually “a proliferation of governments elected on the back of opposition to neoliberalism.”

At the same time, he remains concerned with the strength of neoliberalism. “The future of neoliberalism in the continent is not yet decided,” he writes in the concluding chapter. “The model remains hegemonic. Mexico, Peru, Colombia and Chile continue to practice it in an orthodox form, while it survives in various forms in countries like Brazil, Argentina and Uruguay.”

Sader is highly critical of those on the left who stake out a strong opposition to the limited reformist policies of the center-left governments like those of Luiz Inácio Lula da Silva and Dilma Rousseff in Brazil. These “ultra-leftists” are facilitating the potential resurgence of the right.

“The left should be working to open up an area of political and ideological dispute in which the polarization between right and left is what predominates,” he argues.

The social movements receive limited attention in Sader’s book, and he is critical of those who see them as the fulcrum of social struggle, sometimes in opposition to left leaders and political parties. He also criticizes Mexico’s Zapatista movement and Argentina’s piqueteros for upholding the “autonomy of social movements” vis-à-vis established governments and political parties even if they are left of center. The World Social Forum, which held its first annual gathering in Porto Alegre, Brazil, in January 2001, is also disparaged for embodying “a view that reduced the struggle exclusively to the social movements and NGOs, in explicit opposition to political organizations and to politics itself, privileging a supposed civil society.” Here Sader’s criticism is flawed, given that left presidents like Hugo Chávez and Evo Morales have attended the WSF and received rousing receptions. Chávez issued his first call for 21st-century socialism at the forum in Porto Alegre in January 2005.

For Sader, the struggle in Latin America is Gramscian, “a prolonged battle for hegemony, or war of position,” he writes. He does not believe that by aligning with the center-left governments the left is subordinated to the bourgeoisie, as occurred with the earlier reformist strategy of the 20th century. Instead, Sader writes that the left today is consciously “seeking an anti-liberal and anti-capitalist alternative,” and he believes that Venezuela, Bolivia, and Ecuador have converged on this strategy.

“Their aim is to overcome neoliberalism and develop processes of regional integration that strengthen the resistance to imperial hegemony, so as to develop post-neoliberal models,” he writes.

With this book Sader has advanced the discussion of strategy in Latin America. His driving thesis for the current period is that neoliberalism is still a very potent force, and that the left needs to unite with the new left governments, whether reformist or radical, to decisively defeat their reactionary and rightist adversaries. If the left and the social movements engage in internecine battles with the new left governments, the right will take advantage of the situation.

This will be a turbulent process of transition. The challenge for the left and the social movements is to find the proper balance between prodding the New Left governments to advance toward post-neoliberal and socialist societies without opening up divisions that allow the right to accumulate forces. As Sader writes on the last page:

“Latin America is living through a crisis of hegemony of enormous proportions. . . . The old is struggling to survive, while the new has difficulty in replacing it.”

Roger Burbach is director of the Center for the Study of the Americas (CENSA), based in Berkeley, California. He is the coauthor with Michael Fox and Federico Fuentes of Latin America’s Turbulent Transitions: The Future of 21st Century Socialism (Zed Books, forthcoming).