On May 10, at an event marking NACLA’s 45th anniversary in New York City, we honored Mexican poet and essayist Javier Sicilia with our La Lucha Sigue award for progressive activism in the Americas. Sicilia is the founder of the militant anti-violence group Movement for Peace With Justice and Dignity (MPJD). Since its inception in March 2011, following the senseless killing of Sicilia’s son, the group has campaigned against the spreading criminal and state violence in Mexico, and more specifically against the militarization of Mexico’s drug war and the concurrent militarization of Mexican society. 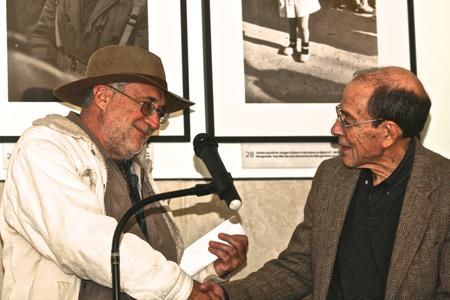 Sicilia’s activism and discourse have increasingly taken on the character and language of nonviolent resistance. To change the dynamic of the violence that has beset the country, he argues, it is necessary to change the discourse of violence. Such a change, he has written, must reflect the belief system of militant nonviolence—the commitment to face power with resistance and sacrifice, and the willingness to publicly absorb oppression in order to end it.

As MPJD’s nonviolent marches and caravans cross the country, he talks to the victims of the violence and writes of the movement’s motives in his regular column for the weekly magazine Proceso. A North American caravan, meant to heighten the awareness of the U.S. role in the Mexican violence, is scheduled to wind its way from San Diego to Washington this coming August. The following is Sicilia’s talk accepting NACLA’s La Lucha Sigue award.

It is a great honor to be with you in this celebration of NACLA’s 45th anniversary. Every celebration of human dignity is a cause of great rejoicing, a rejoicing of the soul. But alongside this happiness, I bring with me a great sorrow that I share with you—you who are part of the great moral reserve that exists in the United States.

I bring the pain of my country that the drug war has unleashed and whose presence contains not only the face of my murdered son, but the more than 50,000 people who have suffered the same fate, the more than 20,000 who have disappeared, the more than 250,000 who have been displaced, the more than 8,000 orphans, whose numbers grow every day, and an impunity rate of 98%. Behind all this pain are thousands of broken families and a population consumed with fear. There are many areas of the country where a state of siege has become a reality.

This pain, which is a product of the corruption of the state and the political parties, of the ineptitude of President Felipe Calderón, who only has an imagination for violence, and of the impunity of the criminals, has its origin in the United States.

Since President Nixon declared a war on drugs 40 years ago, drug consumption has not only grown but has generated this immense wave of violence. What we are living through in Mexico, in all its horror, is an expression of the pain and destruction that this war has generated in many territories of our continent. From Mexico, passing through Central America, Colombia, Brazil, and many neighborhoods of many cities of the United States, the suffering it has caused, reveals, in its frightening failure, its ability to produce dirty money. The illegal trafficking of narcotics and the war to combat that trafficking have become two of the world’s biggest businesses, comparable to the oil industry.

Beneath the apparent legitimacy of the combat—all war constructs abstract legitimacies: saving young people from the vice and sickness produced by drugs—in reality it covers up the filth of money and expresses the irreparable nature of pain. This legitimacy has not only destroyed many more lives than those that are taken by the effects of some of the prohibited substances, but it has also torn apart Mexico’s social fabric, destroyed towns and communities, sown misery and fear, endangered the national security of all the countries involved, and exacerbated our problems in a way that translates into a lack of well-being, social instability, and greater migration.

In addition, it has strengthened the enormous criminal structures that not only enrich themselves thanks to the conditions created by the illegal drug market and the arms that enter Mexican territory on a daily basis, but that, with the use of these arms, expand their activities to the trafficking of people, extortion, and kidnapping. In Latin America, public institutions have been corrupted to such a degree that we are left at the mercy of a criminality that can count on the deliberate ignorance and complicity of a great many public officials.

In the United States this ignorance and complicity has functioned, by way of the financial system, to allow the laundering of fortunes amassed with the blood and pain of Mexicans. While from the south come the drugs that nobody on either side of our borders turns back; from the north come the arms that nobody turns back and that the cartels, enriched by the immense demand of U.S. consumers, buy in U.S. gun shops in order to impose their law and martyr our people. As in the days of Prohibition, today’s war on drugs has generated a criminal underworld, corruption, violence, and death.

As I come here today to join you in celebrating 45 years of dignity and moral resistance, I have also come to share this frightening reality that joins us, this experience of pain and suffering, which is also, as you know as well as I, an experience of resistance and dignity in the face of the barbarity of this war. Many of us in Mexico have said we are fed up [hasta la madre], and for the past year we have been working to make the victims visible, to recover their names and their histories, to place the national emergency we are living through in the center of political blindness and civic consciousness, to do justice to the victims—who have been criminalized by Calderón’s military policy and scorned by the corruption of the state institutions of justice—and to find a route toward peace.

Now we would like to walk with you, with the moral reserve of the citizens of the United States and with our brother and sister migrants who have come here to look for the opportunity that their countries deny them and who are also brutally affected by the war. The responsibility of the United States in this horror is, as we know, immense, and as we have done in Mexico, we must work together to place in the consciousness of the citizens of North America as well as their governments not only their responsibility, but the necessity of putting an end to this nightmare and escaping from the hell that we share.

You know well that this war is absurd and useless and that it was lost before it began. We must not permit a public health problem, the problem of drug use, to keep being treated as a matter of national security to be combated by violence. Nor can we permit a problem of national security, the problem of arms sales, to be allowed to continue without strict controls, while it is abandoned to criminality and to the whims of the interests of big business. Both policies must take a different course. 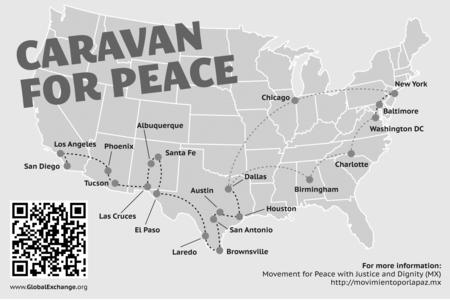 The route of the MPJD's U.S. Caravan in August.

Therefore, on this day in which NACLA celebrates 45 years of struggle for dignity, we invite you to travel with us on the caravan that will leave San Diego, California, on August 12, headed for Washington, DC.

We have no intention of creating a world in which evil does not exist, in which innocents are not murdered—those pretensions, which are those of puritans, always end by creating greater crimes—but if we work together, if we travel together and summon the moral reserve of our two countries, we can contribute to the lessening of the evil. We can stop this stupid war, this war that is humiliating and dehumanizing all of us, this war that, like all war, is a negation of the goodness of life and an exaltation of capital, that which two great writers, Giovanni Papini and Leon Bloy, defined as “the devil’s excrement” and “the blood of the poor.”

Let me also say that we must honor the San Andrés Accords [between the Zapatistas and the Mexican government].