Jesus and the Gang: Youth Violence and Christianity in Urban Honduras, by Jon Wolseth, 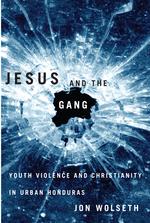 In urban Honduras, youth use both guns and prayers to survive the violence that permeates their everyday life. In Jesus and the Gang, author Jon Wolseth—a former Peace Corps volunteer and professor of Luther College—writes of the struggles of young Honduran men with the widespread assumption by Honduran society that all poor young men are criminals. The Catholic and evangelical Protestant churches believe these young men need to be saved from the violence. They seek to guide the lost youth to a life better than bullets, tattoos, and certain death.

Wolseth studies how young men both use and challenge the moral authority granted by churches to respond to violence. He also details how the sisters, wives, girlfriends, mothers, and friends of gang members involved in church groups experience crime and help young men find support and a way out of gang life. After an introduction to the ethnography of Colonia Belén, the pseudonym for the neighborhood in El Progreso where Wolseth conducted his fieldwork, Wolseth examines the meaning and impact of gang tattoos. He also highlights the differences between youth responses to violence in the Catholic and Protestant churches. He concludes with a look at how the youth invent creative solutions to cope with violence and how many young men of Colonia Belén found ways to escape gang life and survive.

Hayes points out that the spirit of Brazilian music, Carnival, and culture largely comes from the favelas. This is also where spirit-based religions and Pomba Gira thrive as means of coping with the crime and violence. With eye-catching chapter titles like “Wicked Women and Femme Fatales” and “If God Is All Good, Then Only the Devil Can Combat Evil,” Holy Harlots is a book outside of the box that will evoke the Pomba Gira in all its readers.

[[wysiwyg_imageupload:860:]]The history of the Caribbean, and the slave trade, led to a culture of diverse African-based traditions and religions. Far from being the supposedly “defunct religions” of an African diaspora, Vodou, Santería, Palo Mayombe, and others are alive and thriving in the islands. In Afro-Caribbean Religions, author and University of North Carolina Wilmington Professor of Philosophy and Religion Nathaniel Samuel Murrell explores the various religions that dot the Caribbean islands and Brazil. Murrell investigates the rituals of animal sacrifice, the unique phenomena of combining creole, European, and African cultures, the diverse gods and spirits, and the connection between Africa and the Caribbean. He then details how these religions survived in a society rife with poverty and a culture overshadowed by its colonial past.

The book is divided into five sections and includes an expansive glossary that covers words from ason—the name for a rattle used as a symbol of authority in the Taino religion—to Xevioso, the god of thunder. Afro-Caribbean Religions is an in-depth and detailed examination of the religions that survived the journey from Africa.

Canel draws from his fieldwork, performed from 1987 to 2004, tracking the social, economic, and political evolution of three Montevideo barrios—Peñarol, El Cerro, and La Teja. He concludes that efforts to build participatory democracy were not uniformly successful. Democratic participation has differed widely from neighborhood to neighborhood, due to the varying “capacities, traditions, predispositions, and personal styles” of community activists and neighborhood officials involved in the project. Together the book examines the cultures, socioeconomic conditions, and politics in Montevideo neighborhoods, and makes some cautious predictions about the future of participatory democracy in Uruguay.

[[wysiwyg_imageupload:862:]]In the 1990s left governments came to power in Latin America, ushering in a period of democratic revival that, according to Seton Hall University assistant professor Benjamin Goldfrank, “advocated giving citizens a more direct role in deciding public policy.” Drawing from scholarly literature, interviews with activists and officials, and his own fieldwork, Goldfrank shows how the 1990s produced innovative programs that promoted local participatory democracy. The book compares participatory programs in Porto Alegre, Brazil; Montevideo, Uruguay; and Caracas, Venezuela. Goldfrank notes that these three programs “bore a striking resemblance” to each other, but some of these programs succeeded in deepening democracy at the local level, while others did not.

Failures in Caracas and Montevideo to institute meaningful democratic reforms in the 1990s, for instance, were rooted in the cumbersome programs themselves, and the inability of ordinary citizens to overcome the bureaucratic red tape discouraging civic participation. These problems, Deepening Local Democracy in Latin America warns, reflect the troubling tendency of participatory programs to demobilize, rather than mobilize populations. Nonetheless, Goldfrank shows how participatory democracy’s biggest challenges, including social inequality, bureaucratic inefficiency, and political rivalry, can be surmounted.

Participatory budgeting, the “champion of popular participation,” the authors of Bootstrapping Democracy write, is the most [[wysiwyg_imageupload:863:]]well-known model of participatory democracy around the globe. It is based on the simple premise that budgets should be decided by citizens and that governments should be decentralized and make decisions based on the people. According to the authors—Gianpaolo Baiocchi and Patrick Heller, both associate professors at Brown University, and Marcelo K. Silva, an associate professor at the Federal University of Rio Grande do Sul, Brazil—participatory budgeting as a political phenomenon has been particularly effective in altering the power structures of Brazilian civil society.

Bootstrapping Democracy explores how participatory budgeting’s remarkable “break from a more simplistic notion of dialogue with social movements” has produced “cooperative arrangements between officials and civil society actors that strengthen both governance and democracy.” This, in turn, has mobilized traditionally underrepresented groups, including low-income communities of color.

The authors explore the adaptability of participatory budgeting to different local realities, reporting that the original blueprint for participatory budgeting, created in Porto Alegre, “changed quite starkly” as it moved around the country and was copied, adapted, and implemented by other municipalities. The book also shows that while elites continue to dominate democratic institutions, there is still hope for progressive reforms to expand democratic participation to challenge entrenched political and economic power.