Only the Pilgrim Knows 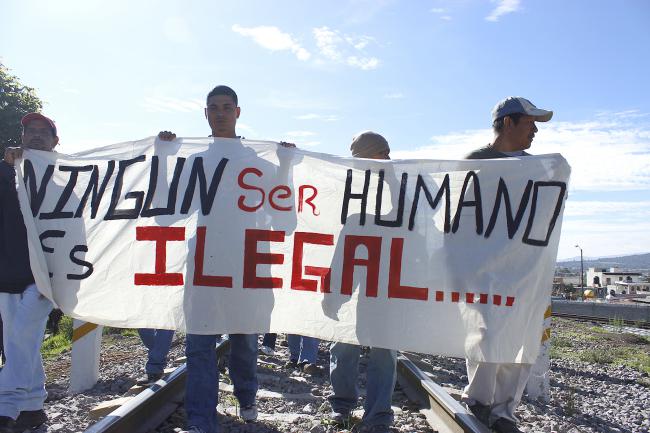 Ed: While migrant activists fight within the United States for the fair treatment of the 90 thousand migrants projected to arrive in the United States during this year’s migration upswing, activists in Mexico have taken on a similar battle. On June 1, a caravan of Central American migrants and international human rights defenders traveled from the Mexican state of Oaxaca to Mexico’s capital city. Their goal was to talk face to face with Mexican congressional officials to encourage them to “humanize” Mexico’s newly enacted, though wholly insufficient Migration Law, and to develop hemispheric solutions, along with U.S. and Central American governments, to what is now officially referred to as a “humanitarian crisis.” We have translated this article in partnership with Subversiones.org to bring you a direct account of the experience.

It’s one in the morning. The joy of arriving is diluted by fatigue. The convoy escorted by the Federal Police (PF) arrives at the periphery of Apizaco, Tlaxcala, a railroad city. The police don’t ask for papers this time. Instead, they escort the more than 60 Central Americans from the caravan of buses. The Federal Police are “serving the community,” as reads the inscription on their police trucks. Incredible.

This contingent of travelers is called the Caravan-Pilgrimage for Dialogue, and at each stop they demand the bare minimum: security, fair treatment, and dialogue to address the reasons behind the migrant exodus.

These are the travelers: Women —both transgender and cisgender—men, boys, girls, single mothers, mothers with children, single fathers, complete families, all companions in grief from four different nations. Tonight, they all sleep at the fully packed La Sagrada Familia shelter. Almost 100 of them have arrived, and there are only two single-sex rooms available with half a dozen bunks each.

The six transgender women who travel with the Caravan sleep with the women. “Our struggle is also to be women,” commented Barbie Brigitte a few days after, connecting the many layers of her struggle. Other travelers spend the night on a moonlit basketball court.

La Sagrada Familia lies below the path of the Ferrosur freight train known by migrants as La Bestia, or The Beast. The company placed concrete rods along the rails right in front of the shelter in order to deter travelers from jumping on or off the train. The modest shelter receives between 30 and 40 migrants every week, and the volunteers who maintain it are either secular or have some affiliation to the Catholic parish church Cristo Rey, whose dome bulges out like a bubble in the desert.

In addition to the rooms, the shelter is equipped with a kitchen and a small infirmary where travelers are frequently treated for injuries caused by the concrete rods, or for respiratory or digestive illnesses contracted during the journey.

For those who ride La Bestia (which runs from the south to the north of Mexico), to arrive at Apizaco without having been victim or witness to some form of abuse is considered good luck. Only the pilgrim knows how much he or she has suffered, what borders he or she has circumvented, or how many days he or she has spent on foot or without a meal.

Hunger, cold, fear, extortion, mishap, horror, maras, zetas; all of these from the dry mouths of the very protagonists of these tales, tired of the repetition. The travelers share their testimonies one more time, naming even terror with normalcy, with a pain dull and numb.

Once they’re on La Bestia again, which they catch in Arriaga, Chiapas, their goal is to get to Ixtepec, Oaxaca. A journey that could be done in four hours by car can take a full day by train. At the Hermanos en el Camino shelter there will be food for body and spirit, and there are rumors of a religious man dressed in white who will help the travelers. His name is Alejandro Solalinde Guerra, a 60-year-old Catholic priest who tirelessly denounces those responsible for this humanitarian tragedy. A traveler himself, he is not always at the shelter, but there will always be someone there the travelers can share their hardships with.

Their stories are all similar: They left their places of origin because of misery, violence, or discrimination. They left looking for a better life; fleeing persecution; leaving behind; leaving; searching. The road itself has become a struggle for survival. In only the short stretch between the Guatemala border and Ixtepec, the travelers have already been victims of extortion, assault, and sexual abuse. Some have witnessed death.

But the road ahead will not let up. Even as far along in their journey as they are at Medias Aguas, Veracruz, the price of continuing on La Bestia, after smuggler fees and extortion, is at least $100, though it can climb to $200 depending on the circumstances. Authorities turn into criminals, and criminals into authorities, seamlessly. In the last 10 years, the abuses against these migrants have been systematically reported—but they continue.

Despite its gravity, this tragedy is no longer news in Mexico. It doesn’t occupy headlines, and doesn’t figure in the speeches of the powerful, as Central Americans do not vote here. “Nobody cares about them,” insists Solalinde Guerra. He calls capitalist neoliberalism a “shitty system.” “Transnationals have appropriated all the riches of Central America,” he says, clad in a white guayabera that, as the story goes, he washes and irons himself.

Honduras is a country devastated not only because the United States has put a military base there, but because of the privatization of natural resource extraction, which has converted former landowners into laborers on their own land. The scope of the country’s troubles exceeds the reach of the Honduran state. “There are six families who own the country,” says Solalinde Guerra before an audience of those who know firsthand the meaning of these three words: abandonment, deprivation, death.

In the 1970s—while in Guatemala, Nicaragua, and El Salvador, the socialist guerrillas waged war against U.S. interventionism—Honduras was the paramilitary training ground for the counterinsurgency. As the armed wing of plunder, extrajudicial crime overran all corners of the country’s 112 thousand kilometers (slightly less territory than the Mexican state of Durango). As a consequence, Honduras has become one of the most dangerous countries in the world.

The arrival of mining companies, the privatization of the beaches of the Honduran Caribbean, the persecution of social leaders, the recent imposition of incumbent Juan Orlando Hernández (who only received 21% of the population’s vote), all converge well beyond the Honduran state’s grasp. It is because of this that the efforts of the Caravan have focused on promoting a dialogue between Central America and Mexico.

Wilson Alexis, a Honduran from La Ceiba, knows that, despite not being born with a silver spoon, he has human rights wherever he goes. “We have inherent rights. We are not poor because of something we deserve.” His words are deep and direct: “We are taught that Mexico is our older brother, but then when we get here we realize that this country runs errands for the United States.”

Solalinde Guerra has tried to get Mexico’s “gringo government” to engage in dialogue. And the last couple of months it has grown bitter, explains the priest, since the Mexican National Migration Institute (INM), pressured by civil society organizations, had to extend a 30-day stay permit to over one thousand Central Americans who managed to move forward in the Caravan towards the U.S. border as they claimed #Libretránsito. But then began the raids and mass deportations.

The hardening of migration policies has come hand in hand with organized crime’s control over historic transit routes. This dangerous combination has resulted in a balance of over 70 thousand disappeared, according to estimates from the Mesoamerican Migrant Movement.

A report from the Washington Office on Latin America (WOLA) reveals that in 2013, 400 thousand Central Americans entered Mexico undocumented in order to get to the U.S. border. This year, the INM deported 80,245 migrants from the “northern triangle” of Central America: Honduras, Guatemala, and El Salvador. In addition, the United States arrested 162,751 Central Americans in a period of eight months.

Powerful voices demand the southern border of Mexico be sealed to avoid passage from Central America, while the U.S. government has increased its border security budget. It has also destined $9 million for the deportation and “reinsertion” of the returnees, among whom there are children, once they are back in their home countries.

One might think that the horror stories would dissuade Central Americans from “risking the journey to Mexico,” but the figures do not account for any decrease. Instead, the exodus continues.

Itandehui Reyes is an independent journalist and editor based in Puebla, Mexico. She is a member of the autonomous media agency Subversiones, reporter at the feminist journal CIMAC Noticias (http://www.cimacnoticias.com.mx/). Follow her @itadelcielo. An earlier version of this article originally appeared on Subversiones.org (CC BY-NC 2.0 México, 2014). Translated by Sebastian Muñoz-Najar Galvez.