The news poured down like a hard Venezuelan rain—Hugo Chávez had passed. After a two-year-long battle with cancer, we should have been prepared. But we weren’t. Like a surreal dream we read the reports from afar. We fielded media calls, listened to Ali Primera, and dialed distant friends, searching for familiar voices; grasping for something elusive that was slipping through our fingers. Comments, cries, gritos rolled in through social media, as we were glued—transfixed—to Facebook and Twitter. 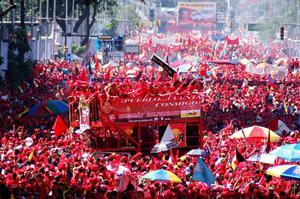 For Chávez supporters, unbelief and grief: “In the center of Caracas, all is peace and quiet, but it breathes pain,” wrote one friend shortly after the news was announced. “I have no words,” wrote another, “just tears of anguish.” “Chávez lives on in each of us,” wrote a solidarity activist from abroad.

Across the ether friends posted their pictures of the Venezuelan president or tweeted #Chavez with comments and links to memorable moments, like Chávez’s 2006 UN General Assembly speech when he called president George W. Bush the Devil. Meanwhile, the opposition celebrated and mainstream editorials continued their media spin, decrying Chávez as a despot who led the country to ruin amid marginal gains for the poor.

Those gains, however, were substantial. Chávez’s revolution offered universal access to free health care. It built schools, abolished illiteracy, and reduced poverty by half and extreme poverty by more than 70%.

For members of Venezuela’s grassroots movements, Chávez meant the hope of a better life and the means to organize to accomplish it. “Chávez is like a guide. Chávez is a door—the door for the struggles that we want to carry out,” said Iraida Morocoima, of Venezuela’s Urban Land Committees in 2009. “But on the other side of that door are the people.”

Chávez attempted to empower communities and promote participatory democracy throughout his presidency. He called on workers to occupy their factories and supported the formation of tens of thousands of cooperatives. Chávez’s government called for the community to organize locally outside of bureaucratic channels and gave the people the tools to do it. Over 30,000 communal councils were created by neighborhood residents to make decisions about their own communities. These new councils could (and still can) receive funds directly from the national government to carry out their projects.

These moves were not flawless, but they empowered, inspired, and handed everyday folks the tools to dream for a better world together and make it happen. “I think that the most beautiful thing is the collective work—that we respect each other and join together and change. We have to change,” said María Vicenta Dávila of the Mixteque communal council in the mountainous state of Mérida. “I think that’s what’s being created here in Venezuela. With or without Chávez, Venezuela is no longer the same, and this is Chávez’s great challenge, to change the mentality of the people.”

For these movements, Chávez will be missed, but the Bolivarian process continues. Vice President Nicolás Maduro is set to take on opposition challenger Henrique Capriles in a new election. There is little doubt that if elected he will carry on in Chávez’s legacy.

There are, of course, many questions. Perhaps more than ever, since Chávez came to power 14 years ago, the future will rest on the collective and the union of the Bolivarian process. As Gonzalo Gómez, co-founder of the Aporrea website, said in an interview in January 2012: “The post-Chávez era will not depend on individual figures but rather on our capacity to continue developing, deepening, and advancing the Bolivarian revolution once that leadership is no longer there.”

Only time will tell.

Michael Fox is a former editor of NACLA Report on the Americas and a member of the NACLA Multimedia Team. He is co-author of Latin America’s Turbulent Transitions: The Future of 21st Century Socialism (Zed Books, 2013). To order the book, see futuresocialism.org.