The past 15 years in Cuba have witnessed a resurgence of groups who focus on self-organization, use the assembly form as a way of making decisions, and are dedicated to non-hierarchical forms of organization.
Tweet
Marina Sitrin
October 10, 2014 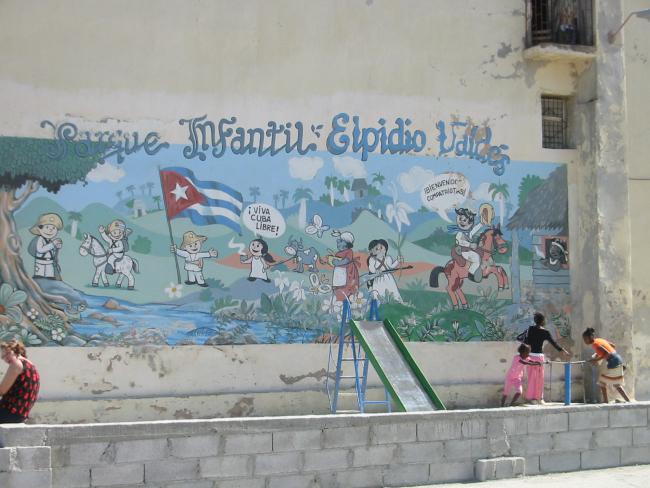 The past 15 years in Cuba have witnessed a resurgence of horizontal forms of organization and relationship-building from below. In addition to a few of the projects of the well-known Martin Luther King Jr. Center (CMLK), there are now a number of other groupings of people who focus on self-organization, use the assembly form as a way of making decisions, and are dedicated to non-hierarchical forms of organization. Each one sees itself as a continuation of the revolutionary process begun in 1959—one that is often identified by its top-down “vanguardist” agenda. And some of these groups cautiously support the new government attempts to create more self-organization within work by pushing initiatives to allow people to develop collective, horizontal self-organization, and not just form small enterprises for individual profit.

These groupings range from poetry and art communities, to popular education practitioners, to those trying to facilitate self-organization in workplaces and neighborhoods and that use language generally associated with participatory socialism. One group, the network of the Critical Observatory (OC), specifically uses the terms “autonomy” and “horizontalism” in its organizing.

I met participants in the then-newly formed OC in 2009, while living in Havana. They were participating in the year-long discussion series, “Hagamos nuestra la revolución” (Making the Revolution Ours), facilitated by the CMLK and Juan Marinello Cultural Center, among others. The most striking aspect of these conversations is that they took place in small circles, with everyone facing one another and speaking from personal experience. The facilitators worked to make sure each person’s opinion was given equal value, paying particular attention to gender and age balance. In other words, the group strove to facilitate the creation of horizontal relationships.

The Critical Observatory is now a space for the exchange of ideas, and to this end facilitates a website with numerous projects and an open writing section for participants. Of the many initiatives within the Critical Observatory, the vaccination project, the local playground renewal, and the assembly discussions modeled after the Spanish 15M movement, are some of the most innovative.

The first, the neighborhood vaccination, included volunteer veterinarians who went into a few neighborhoods where the stray dog population was rampant and the neighbors frustrated. After many attempts at getting the local government to respond, people eventually took matters into their own hands, and with the OC, vaccinated the strays. They also vaccinated any pets that people had—a huge endeavor considering veterinary care is not free in Cuba.

The second initiative, also occurring after a similar history of no government response to community requests—this time to fix a playground in disrepair—the OC organized together with neighbors to repair and paint the playground themselves. This effort also extended to the kind of play they encouraged in the playground, with the group facilitating non-competitive games and activities with the children in the neighborhood to foster collaboration. A similar initiative has been underway for a number of years now in the area of Alamar, in the eastern part of Havana, where mass apartment complexes are also in disrepair, and neighbors are self-organizing and working together to help fix one another’s homes.

The final initiative was a conversation with a guest from the 15M—the ongoing movement in Spain named for the date of its first mass mobilization, on May 15, 2011, in protest of the Spanish government’s handling of the sovereign debt crisis. The conversation took place in a park, with people sitting in a circle, as the “movement of the squares” mobilizations around the world have become known for.

While small examples, these practices of self-organization and horizontalism have transformative potential, especially given a political culture in which citizens wait at length for the government to respond before any action can take place, and in which public conversations using direct democracy and the assembly form are the outlier.

It is these sorts of examples that develop the autogestion, or “self-management” muscle—something that movement participants are working on around the globe, from workplaces to neighborhoods.

In a written correspondence last May, Dmitri, a member of the OC, explained:

The Observatory began to self-organize in the 1990s when state totalitarianism constituted a strong negative reference point for us, and we did everything possible to avoid its practices and outrun its ideological roots, striving instead to be as horizontal as possible.

We define ourselves among the alter-mundistas (global justice movements) and we see our own critique as radically different from the “right wing opposition” in Cuba, who want to make this country “normal” (ie liberal-democratic and capitalist). We realize that this “normalcy” is leading the world into extreme conditions of exploitation, oppression, discrimination, violence, authoritarianism—precisely what constitutes the “social object” of the work of the Observatory.

We have had contact with the 15M and Occupy, and other similar movements in Latin America and Europe, and see ourselves aligned and similar to them—just on a smaller scale.

Marina Sitrin is a Visiting Scholar at the Center for Place, Culture and Politics at the CUNY Graduate Center. She is the co-author of They Can’t Represent Us!: Reinventing Democracy from Greece to Occupy (Verso Books, 2014), Everyday Revolutions: Horizontalism and Autonomy in Argentina (Zed Books, 2012) and Horizontalism: Voices of Popular Power in Argentina (AK Press, 2006).