A Tribute to Saul Landau

Saul Landau died at the age of 77. He was the Renaissance man of Latin American studies: a filmmaker, essayist, professor, novelist, and poet. I was honored to be Saul’s friend since we were graduate students at Stanford. Saul was a protégé of sociologist C. Wright Mills, under whom he studied at the University of Wisconsin. He helped Mills with his famous defense of the Cuban Revolution, Listen Yankee: The Revolution in Cuba. Mills was to debate a U.S. undersecretary for Latin America on U.S. Latin America policy and Saul recruited a group of us to help him prepare for the debate, but Mills suffered a heart attack and was unable to participate. 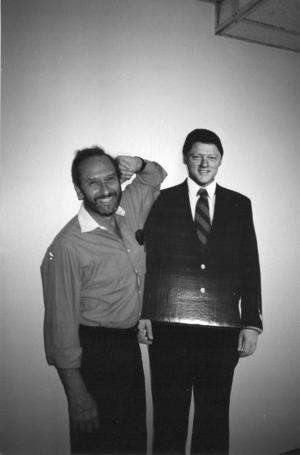 Saul recruited me to write on the overthrow of the Brazilian government in 1964 for Studies on the Left. He coached me on how to make a theatrical denunciation in a mass meeting in San Francisco protesting the U.S. overthrow of the democratic government of Juan Bosch in the Dominican Republic. I helped on his films on Brazil and the Zapatistas in Mexico and he advised me on how to keep from being fired from my teaching position when the media attacked me for my activism in Latin America solidarity movements. I later crossed paths with him in Cuba, Chile, and it seems like almost everywhere.

He was a committed radical with an acerbic wit and almost frightening originality. The breadth of his work was astonishing. His impressive legacy includes more than 40 documentaries, 14 books, and trenchant commentary on current issues for a number of print and online publications. His films dealt with Cuba, Chile, Brazil, Jamaica, Mexico, Nicaragua, Iraq, Syria, and nuclear testing in the United States.

He is particularly known for films that brought the reality of the Cuban Revolution to international audiences, notably films like Fidel (1968) and The Uncompromising Revolution (1988). The 1968 PBS documentary Fidel, was shot during a week-long jeep tour of the country that allowed him unprecedented access to the Cuban leader. New York and Los Angeles premieres of the film were both canceled after firebomb attacks on the theaters. “These right-wing Cubans had, how shall I say it, ‘strong views’ on free speech,” Saul later commented. At the time of his death, he had yet another Cuba film in the works, this one on the fight against homophobia in that country.

His last completed film, Will the Real Terrorists Please Stand Up, details the shameful history of U.S. policy to- ward Cuba from the Bay of Pigs to the case of the Cuban Five. The film narrates the history of U.S.-Cuban relations through the lens of the Cuban Five, a group sent to infiltrate right-wing terrorist organizations in Miami. When the spies turned over evidence of U.S.-based terrorism to the FBI, they themselves were arrested and convicted while the anti-Castro terrorists continued to live freely in Florida. Several times in the last years of his life, Saul joined actor Danny Glover in driving hours across the California desert to visit one of the Five, Gerardo Hernández, in California’s Victorville prison. 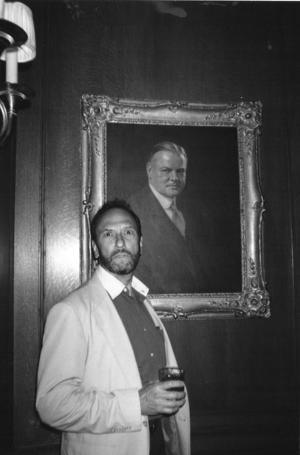 No stranger to irony, Saul poses in front of a portrait of Herbert Hoover. IPS.

In 1971, Saul released two films about the election of Chilean president Salvador Allende, Latin America’s first democratically elected socialist leader. Chilean ambassador Orlando Letelier invited him to screen one of the films at the embassy in Washington and they became friends. Two years later, a military junta led by General Augusto Pinochet overthrew the Allende government and imprisoned Letelier.

Saul worked with other international supporters to secure Letelier’s release and to arrange a job for him at the Institute for Policy Studies (IPS) in Washington, where he became one of the most prominent critics of the Chilean dictatorship. In 1976, agents of Pinochet used a car bomb to assassinate Letelier and IPS colleague Ronni Karpen Moffitt on Massachusetts Avenue in Washington, D.C.

Saul immediately launched an IPS investigation into the murders. He was suspicious of the FBI, which had conducted extensive surveillance and infiltration of IPS during the Nixon era. In the course of the investigation, however, Saul developed a close working relationship with the lead FBI agents and maintained strong friendships with them for decades after the crime.

He then authored, together with John Dinges, Assassination on Embassy Row, an investigation into the murders of Letelier and Moffitt. In 1995, Saul and his former IPS colleague, the Spanish jurist Joan Garcés, co-authored the book Orlando Letelier: Testimonio y Vindicación to help revive efforts to bring Pinochet to justice. Three years later, Saul was thrilled when a case Garcés had filed in the Spanish courts resulted in the former dictator’s arrest in London. While Pinochet ultimately avoided prosecution, Saul celebrated this measure of justice and the precedent it set for international human rights law. With obvious glee, he wrote that as a result of the arrest, “rumors abound that Henry Kissinger makes discrete inquiries before he travels abroad, to assure himself that he won’t get ‘Pinocheted.’”

Saul made two films about Jamaica during the reformist presidency of Michael Manley. Internationally, Manley had followed a firm anti-imperialist line, campaigned for a New International Economic Order, vigorously opposed apartheid, and promoted close relations with Cuba. In his book Struggle In The Periphery, Manley relates how in 1975 U.S. Secretary of State Henry Kissinger solicited his support in condemning Cuba’s military operation in Angola aimed at stopping the advance of the South African-backed UNITA forces. Kissinger hinted that a large package of U.S. aid would be forthcoming, at a time when Jamaica was running desperately short of foreign currency. Manley refused, the aid never materialized, and a vicious campaign of destabilization ensued.

Manley was running for re-election in 1976 and Saul’s film documents the experience of accompanying him on the election trail. The film captures the love that Jamaicans feel for their homeland, its people, landscape, food, and customs. It was hugely popular in Jamaica and was used in the closing stages of Manley’s election campaign.

In 1980, Manley had to call a new election ahead of schedule. This time the situation was much more difficult, and election-related killings in Jamaica reached a new high of around 800 in that year. Once again, Saul used his filmmaking skills in a work of solidarity with the Jamaican struggle. Saul’s 1980 film, Steppin, documented the threat of fascist repression represented by Manley’s political opponents, and was also used in Manley’s re-election campaign and among solidarity groups in the United States. Manley lost the election of October 1980. His successor, Edward Seaga, was strongly backed by the Reagan White House, the IMF, and the World Bank; he broke relations with Cuba and sup-ported the U.S. invasion of Grenada in 1983.

Saul’s awards include an Emmy and the George Polk award for investigative reporting, both for Paul Jacobs and the Nuclear Gang, a documentary exposing the devastating effects of nuclear testing on people living downwind of the Nevada testing ground. For his human rights work he was awarded the IPS Letelier-Moffit award. The Chilean Government awarded him its highest civilian honor for a non-Chilean, the Order of Bernardo O’Higgins. Saul was a founder and board member of the Center for Cuban Studies, which awarded him the Center’s Carlotta Award.

On August 7 the Cuban Government awarded him the Orden de la Amistad de la República de Cuba (Cuban Medal of Friendship). At the ceremony, former president of the National Assembly Ricardo Alarcon said, “Saul Landau deserves this recognition and much more. He has given our people a sincere, unlimited, authentic friendship all his life. In his early youth he embraced revolutionary ideas and never abandoned them. He always upheld these ideas far from dogmatism, bureaucratic, or sectarian distortions. He has been a loyal friend since the long-gone times of Ramparts magazine and Studies on the Left to Progreso weekly, and his intense participation in the struggle for the liberation of our five compañeros unjustly punished for fighting against terrorism.”

As a professor at Cal Poly Pomona, Saul regularly took students to Cuba and in the 1999-2000 academic year collaborated with Don and Marjorie Bray and Enrique Ochoa at Cal State Los Angeles and Rosalind Bresnahan at Cal State San Bernardino to create an innovative tri-campus program that brought eight prominent Cuban writers and social scientists for two weeks each to those institutions followed by a student-faculty study tour to the island. Saul also taught classes at the University of California Santa Cruz and American University.

“He stood up to dictators, right-wing Cuban assassins, pompous politicians, and critics from both the left and the right,” said Institute for Policy Studies Director John Cavanagh. “When he believed in something, nobody could make him back down. Those who tried would typically find themselves on the receiving end of a withering but humorous insult.”

Gerardo Hernández, the member of the Cuban Five in jail in Victorville, California, wrote just before Saul’s death: “It is just a journey, Saul. The other is not true.

You’ll come when someone wants to know everything about the bomb that killed Letelier and Moffit in the heart of Washington DC. When someone wants to understand Chiapas or the maquiladoras. When they read your poems, or your al- ways accurate articles. When people mention your Medal of Friendship of Cuba, your Bernardo O’Higgins of Chile, your Emmy, and so many other awards and decorations. You will come whenever I tell someone that I had the privilege to meet you, learn from you, enjoy your sense of humor... On behalf of the Five, our families, and so many good Cubans, thank you!”