The United States and Cuba: A Half Century of Aggression

These two books treat relations between the United States and Cuba. They show in detail the formulation and impact of U.S. policy on the island over time and discuss Cuban initiatives and responses. They also look at international events. Both include brief historical summaries starting from the war of 1898. Jack Colhoun’s Gangsterismo: The United States, Cuba, and The Mafia: 1933 to 1966 primarily concentrates on the years leading up to the Revolution through the missile crisis. Salim Lamrani, in The Economic War Against Cuba. A Historical and Legal Perspective on the U.S. Blockade, mainly deals with the impact of the blockade instituted against the island after 1962, and covers U.S. policy through the first Obama administration. Both books are well documented, heavily relying on official sources and personal testimonies. For example, Lamrani includes 221 notes for 114 pages of text, most of them citing more than one source. Gangsterimo has almost 800 footnotes dotting its 250 pages, most of them also multi-listing. This creates something of a problem because there is no bibliography and so the reader is forced to find the first citation of a particular author in order to get full data on the source. Colhoun, a historian and investigative reporter, largely refrains from comment, allowing the quotes and documents to make his case, which they do very effectively. Lamrani also allows the facts to speak for themselves. While not hiding their sympathies towards Cuba, neither author falls into a preachy style: “this is what they should have done or should do” school. The lack of judgments is refreshing for this kind of work. 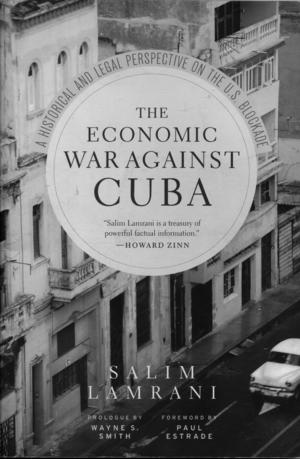 Together the books show conclusively the exceptional lengths to which the United States has gone to destroy the Cuban Revolution. And they document how U.S. policy, despite its substantial negative impact on the island—the economic cost alone amounted to over $751billion by 2010, (Lamrani p.74)—has failed to either topple the regime or even result in a reasonable hope that this would happen. Lamrani, a professor at the Sorbonne, shows how the attempted isolation of Cuba has an impact on vital services in the health area by denying access to vaccines, drugs and medical equipment of all types. This denial is effective because 80% of all medical patents are held by U.S. companies, and they can be punished if they supply Cuba even indirectly.

Lamrani also shows how Cuba is singled out for special treatment by U.S. authorities. Customs stops and subsequent fines have been heavily over-weighted, and 70% of all customs penalties are levied against those coming from Cuba, even to the slighting of people travelling from clearly more sensitive areas like the Middle East (Lamrani p.66). He also has good data on how Washington reaches out to stop non-U.S. companies from doing business in Cuba or exporting any products that contain Cuban materials, i.e. nickel. The Dutch bank ING was fined $641million for dealing in U.S. dollars with Cuba (Lamrani p.61). Further, he shows how U.S. actions contravene international law and accepted norms in international economic relations.

A short chapter at the end briefly outlines opposition in the United States to economic sanctions, but does not touch on any popular movements, sticking to liberal think tanks, politicos, and establishment figures. The appendices include a historical resume of the UN ballot results on economic sanctions, which show that in 2011 only the United States and Israel voted in favor. Another section presents selections from the UN debate on sanctions that same year.

U.S. arrogance in treating Cuba oozes from the pages. The Helms-Burton act, which goes against international law on several different levels, for example, not only lays out school programs for the “new Cuba” but specifies that only foreigners can teach the children history. Further, “...the President of the United States will judge whether it (the new government) meets the requirements established” by the document. There is no mention of human rights, freedom of expression, or even a multi-party system. But the new government must make significant progress in returning all property taken from U.S. citizens on Jan.1, 1959 or thereafter. (Lamrani p35) 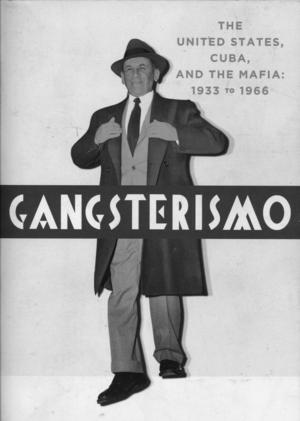 Gangsterismo delivers much more than the title promises. It is basically a well documented account of the period from the late 1930s through Lyndon B. Johnson’s coming to office, concentrating on U.S.-Cuban-Soviet relations in all their twists and turns. The main narrative contains few surprises for those who have studied the period, but the devil is in the details. Here good stuff lies. One example. John Fitzgerald Kennedy calls Pierre Salinger into his office: I want you to buy me 1,000 Cuban cigars, requesting Petit Uppmans. Two days later he asks; did you get them. “Yes sir, 1,100.” Kennedy then pulls out the executive order, which among other things bans the import of Cuban cigars and signs it on the spot. There is also material about presidential dalliances with women, introduced in one case by the mafia-connected Frank Sinatra. The text is gossipy in some places, e.g.: “Sipping his double martini in the lobby of the Hotel Fontainbleu …” This does not detract, but adds real flavor. And the raft of people cited throughout as playing major and minor roles in the U.S.-Cuba relationship make fascinating reading for the avid student of the period.

But several more important things come through the material. One, diplomacy is built on lies. Two, duplicity within the highest layers of government is a given. Three, one branch of government often does not really know what the other is plotting (a deliberate hiding) which makes for dangerous misunderstandings and sometimes actions. Four, the military usually says “bomb them,” but they can be stopped. On another plane, the book shows Soviet diplomats and leaders as human beings, something seldom seen in U.S. writing about the Cold War period. They, just like their U.S. counterparts, spent sleepless nights agonizing about nuclear war and massive casualties during the missile crisis.

The book also clearly demonstrates that Fidel always stuck to his guns (even when he did not have any) and never caved to Soviet demands, compromising but without selling out the Revolution either in Cuba or elsewhere. Although the CIA/FBI financed much of the counter-revolutionary activity in Florida and elsewhere, neither one ever exercised total control over the exile community. Dissident groups always existed, many financed by mafia money or Cuban exiles. Indeed, the U.S. intelligence apparatus worked hand-in-glove with known mafia figures, like Santos Trafficante Jr., sometimes even fixing or ignoring indictments against them so that the connection would not surface. And if the text is to be believed, this occurred at the highest level, i.e. the Kennedys. The mafia only wanted their gambling/hotel empire in Havana back under any new regime. When they finally realized that this was not about to happen they moved to Florida and cut back on Cuban related operations.

A lengthy photo section accompanies the text. Period piece items include mafia figures, major political actors, scenes from the Revolution, and some cultural takes. Among the latter sits a picture of the popular singer Beny Moré and a great 1947 image of a singing group that includes Celia Cruz with Las Mulatas de Fuego.

The incredible disunity among exile groups based on egos/personalities and sometimes politics surfaces regularly. But those groups are not to be underestimated. They even supplied anti-Revolution information to Congress people (e.g. New York Senator Kenneth Keating) who then used it regardless of accuracy. The work also cites in detail the constant failed attempts by the CIA, exiles, and mafia to assassinate Fidel (and sometime Raúl, Che, and others). Despite all the work to organize either an internal opposition or an external invasion, U.S. military intervention remained the sine qua non of any plan. While on one hand touting non-interventionism on the continent, Washington schemed to massively intervene in Cuba.

How believable is all this? I did not check all the documents, but one does not cite official chapter and verse without a lot of truth being there And the footnotes are there to back it up. The author claims that the Bay of Pigs operation was well known. I was doing research at the Library of Congress at that time. A relative of mine had left the intelligence services in 1953 after a stint at the National War College. He tipped me off that the invasion was on! For me, this lends some credibility to the argument.

Both these works belong in any research library. Those interested in Cuba, U.S. diplomacy, or U.S.-Soviet relations should read them. They add interesting data to what we know. They also shed light on the workings of U.S. foreign policy at the basic levels. Hopefully things have improved since the authors wrote, but with the latest doings on Syria and President Obama’s hardening line towards Cuba, it is hard to be optimistic.

Hobart A. Spalding is Professor Emeritus at the CUNY Graduate Center and Brooklyn College.