Washington and São Paulo: Spying and a Fading Friendship

The only thing missing from Brazilian President Dilma Rousseff’s speech at the UN General Assembly last month was “it still smells like sulfur.” For those who don’t remember, these were the immortal words of Venezuela’s President Hugo Chávez in 2006, describing the podium where “the Devil”—his name for President George W. Bush—had spoken the day before. Chávez’s speech received hearty applause and prompted some New Yorkers to hang a banner from a highway overpass that said “Wake Up and Smell the Sulfur.” 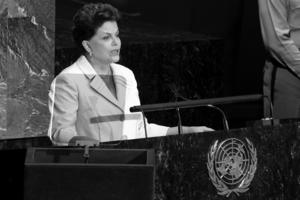 Dilma at the UN, 2011. Photo by Roberto Stuckert Filho.

Dilma’s speech also got a lot of applause at the General Assembly, and because she spoke immediately before President Barack Obama, her remarks were even more pointed. She presented a stinging rebuke to the Obama administration’s mass surveillance operations, at home and abroad:

“As many other Latin Americans, I fought against authoritarianism and censorship, and I cannot but defend, in an uncompromising fashion, the right to privacy of individuals and the sovereignty of my country. In the absence of the right to privacy, there can be no true freedom of expression and opinion, and therefore no effective democracy. In the absence of the respect for sovereignty, there is no basis for the relationship among nations. We face, Mr. President, a situation of grave violation of human rights and of civil liberties; of invasion and capture of confidential information concerning corporate activities, and especially of disrespect to national sovereignty.”

Her remarks were a reminder, and for some a new discovery, that the differences among the left-of-center governments of South America on hemispheric and foreign policy issues were mostly a matter of style and rhetoric, not of substance. The speech came in the wake of the cancellation of Dilma’s scheduled October state visit to the White House, which would have been the first by a Brazilian president in nearly two decades. It was another blow to the Obama administration’s tepid efforts to improve relations with Brazil, and with South America in general.

At this moment, U.S.-South American relations are probably even worse than they were during the George W. Bush years, despite the huge advantage that President Obama has in terms of media image, and therefore popularity, in the hemisphere. This illustrates how deeply structural the problem of hemispheric relations has become, and how unlikely they are to become warmer in the foreseeable future.

The fundamental cause of the strained relationship is that Washington refuses to recognize that there is a new reality in the region, now that a vast South American majority has elected left governments. In Washington’s foreign policy establishment—including most think tanks and other sources of analysis and opinion—there has been almost no acknowledgement that a new strategy might be necessary. Of course, most of the foreign policy establishment doesn’t care much about Latin America these days. And there is no electoral price to be paid for stupidity that leads to worsening relations with the region. On the contrary, the main electoral pressure on the White House comes from the far right, including neocons and old-guard Cuban-Americans. And Obama is not above caving to these interests when the White House and State Department are not already on their side. But among those who do care about Latin America—from an imperial point of view—the lack of imagination is breathtaking.

The establishment has, over the past 15 years, sometimes adopted a “good left, bad left” strategy that sought first and foremost to try and isolate Venezuela, often lumping in Bolivia, Ecuador, and sometimes Argentina as the “bad left.” But in the halls of power, they really do not like any of the left governments and are hoping to get rid of them all. In 2005, according to State Department documents obtained under the Freedom of Information Act, the U.S. government promoted legislation within Brazil that would have weakened the Workers’ Party, funding efforts to promote a legal change that would make it more difficult for legislators to switch parties. This would have strengthened the opposition to Lula’s Workers’ party (PT) government, since the PT has party discipline but many opposition politicians do not. 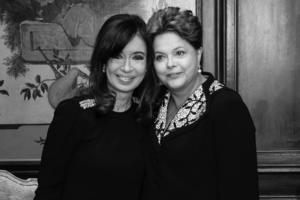 Dilma and Kirchner at the UN, 2013. Roberto Stuckert Filho.

So it is not surprising that Brazil has been, according to the documents revealed by former NSA contractor and whistleblower Edward Snowden, the top Latin American target for U.S. spying. It is a lot like all the other left governments that Washington would like to get rid of, only bigger. It is true that countries with U.S.-allied governments like Mexico were also targeted, but in the context of Brazil’s alliance with other left governments, the large-scale espionage there—which reportedly included monitoring of Dilma’s personal phone calls and emails—takes on a different meaning.

In the past decade of Workers’ Party government, Brazil has lined up fairly consistently with the other left governments on hemispheric issues and relations with the United States. When the Bush administration tried to expand its military presence in Colombia, Brazil was there with the rest of the region in opposition. The same was true when Washington aided and abetted the overthrow of “targets of opportunity” among the left governments: Honduras in 2009 and Paraguay in 2012—although in these cases Washington and its allies still prevailed. Brazil also supported other efforts at regional integration and independence, including UNASUR (the Union of South American Nations), which has played an important role in defending member countries from right-wing destabilization attempts as in Bolivia in 2008, or in the April elections in Venezuela, where the Obama administration supported opposition efforts to overturn the results with obviously false claims of electoral fraud (A CEPR study showed that the probability of getting the April 14 election day audit results confirming Nicolás Maduro’s win, if the vote had actually been stolen, was less than one in 25 thousand trillion).

Lula made a conscious decision that Brazil would look more to the south and less to the United States as a leader in its foreign and commercial policy. In an interview with the Argentine daily Pagina 12 this past October, he explained how important the turning point of Mar del Plata was, when the proposed Free Trade Area of the Americas (FTAA) was finally buried at the Summit of the Americas in 2005:

“It was fundamental that we had stopped this proposal to form the FTAA, at Mar del Plata. It was not a true project of integration, but one of economic annexation. With its sovereignty affirmed, South America looked for its own path and a much more constructive one. . . . When we analyze this history of South America we can see that it is one great conquest. If we had not avoided the FTAA, the region would not have been able to take the economic and social leap forward that it did in the past decade. Argentina, Brazil, and Venezuela played a central role in this process. Néstor Kirchner and Hugo Chávez were two great allies in accomplishing this.”

In 2002, when Lula was elected, Brazil’s exports to the United States were 26.4% of its total exports. By 2011, they were down to 10.4%. Meanwhile, China’s economy is by some measures already bigger than the U.S. economy, and it may well double in size over the next decade. That projection, which would require only a 7.2% annual rate of growth, is quite probable, as likely as any ten-year projection for the United States—perhaps even more so. The United States will become increasingly less important to Brazil, and to South America generally. Given that Washington still does not respect Latin American sovereignty, much less the goals and aspirations of its democratic governments, the steady decline of U.S. economic power has to be seen as a good thing for the region.