Water Beyond the State 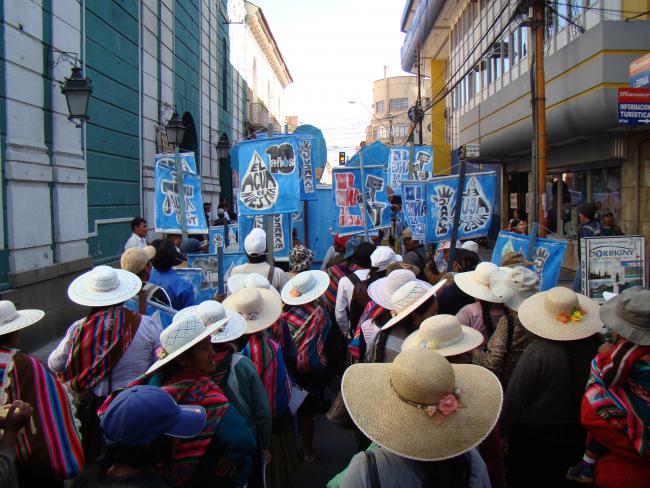 Autonomy and horizontalism are among Bolivia’s most traditional forms of social organizing. Together, they constitute an alternative way—one that is real, practical, and quotidian—of understanding what we mean by “lo publico” (publicness), and what it means to practice living, participatory democracy at the margin of the state and the governments that hold power.

The water committees of the southern region of Cochabamba, Bolivia’s fourth largest city, are the epitome of Bolivian forms of autonomy and horizontalism. Still an active network today, these organizations became visible after the “water war” of 2000, when community mobilization on a mass scale halted a state-sponsored attempt to privatize Cochabamba’s water supply.

While many associate the water war with the notion of “true” democracy, the description might seem a contradiction: war implies violence, loss of energy and resources, death, and disagreement; western notions of democracy, we are told, are designed to avoid that. But the conflict was not a straightforward battle over the mere defense of a resource. It grew precisely out of the historical—and ongoing—struggle of the Bolivian people to defend their right to decide horizontally and autonomously about their own needs; that is, their imperious and ever-present need to live in a true democracy.

In September 1999 the Municipal Potable Water and Sewage Service of Cochabamba (SEMAPA) was sold to the Aguas del Tunari Consortium, of which transnational corporation Bechtel was a major shareholder. This was the corollary to a series of reforms beginning in the mid-1980s, following the “structural adjustment” programs sponsored by the World Bank (WB) and International Monetary Fund (IMF), that toppled a decades-long era of local resource control. After the privatization of SEMAPA, the citizens of Cochabamba faced excessive rate increases for purchasing water, at times up to 200% of the existing rate, and the water committees that formerly managed water distribution at the local level were forced to buy licenses to access water resources. Opposition to Aguas del Tunari was organized by the Coalition in Defense of Water and Life. Following several months of negotiation with the state and confrontation with armed forces, the Coalition, supported by mass mobilization throughout Cochabamba, managed to get the company expelled.

One of the results of the water war mobilization was the increase in visibility of the network of committees in Cochabamba, which has deepened its level of organization across the city since its victory in 2000. While found throughout the urban periphery, the committees are primarily concentrated in the southern zone of the city. The southern zone is comprised of six districts and half the population of the city—more than 200 thousand inhabitants, most of whom are the population segment most affected by the inefficacy of the public water company, SEMAPA. This zone has around 150 water committees that add to the 400 in the entire metropolitan area of Cochabamba, according to Stefano Archidiacono of the Italian volunteer organization CEVI. We are, therefore, speaking of thousands of Cochabambinos organized around water.

Despite the fact that, in Bolivia, no two services operate the same way, in the case of hydric resources, organizations like the committees have a united vision—common throughout the Andes—that water is a divine living being. Water is for these organizations the foundation of reciprocity and complementarity. Water is seen as a being that belongs to everybody and no one, a being that expresses flexibility and adaptability, helps nature create and transform life, and allows for social reproduction. While this shared understanding of water has always been common in rural Bolivia, the water committees are ensuring the diffusion of this belief system in Bolivia’s urban centers as well.

Many Bolivian commentators have traced the origins of autonomous practices adopted by the water committees back to the Inca Empire, through the colonial period, up to today. As a result, the committees are often considered a modern expression of Bolivian age-old communal practices. In a 2011 Bolpress article titled “State and Autonomy in Bolivia, An Anarchist Interpretation,” Cochabamba-based social scientist Carlos Crespo explains that autonomy in Bolivia has not been “an ideal to be achieved, but rather a routine practice of the people, communities, and like-minded groups throughout what we know of today as Bolivia…[Its] defense and/or amplification has been a constant presence within [Bolivians’] social and political practices in their relation to the state and to ruling power.”

As in many of Bolivia’s indigenous struggles, the committees represent an anti-state vision of autonomy. They are viewed as anti-state because they emerged from the marginal neighborhoods of the city, the so-called poverty belt, as an organizing initiative of the two main social groups: the immigrant campesinos who contributed the tradition of the “ayni”—a mutual support system practiced throughout indigenous communities in the Andes—to their now-urban communities; and the relocated miners who contributed experiences gained in the mining unions.

The committees have therefore implemented a myriad of organizational forms unrecognized by western structures of democracy. Based on the promotion and reinforcement of the people’s autonomous processes, the committees have developed a network for mutual cooperation and coordination. Within them, members of each community divide and distribute roles in order to discuss the access to water in their neighborhoods. Decisions are made, to a greater or lesser degree, by the collectivity. They are not organized in opposition to public water systems, but rather in favor of the capacity to decide how and to what extent they have to connect them to their own systems. They are based on practices of self-organization unrecognized by—and in no need of recognition from—the state or the international community.

In the water committees, the most pressing concerns have to be taken care of at the community level, where committee members organize to determine and implement their own living conditions—not to ask for state favors, as critics within the government may claim. As a result, the water committees are about much more than just water, despite their early formation around the guarded abundance and artificial scarcity of the resource. Today the committees dedicate themselves to a range of matters: the well-being of their members, local security, and neighborhood activities such as parties, celebrations, and soccer.

Such is the degree of independence in the actions of the committee that some, including Crespo, have declared them zones that are truly “liberated” from the state.

These are confusing times for Bolivia, and the challenges facing water committees are many, from technical and financial limitations, to their continued negotiation with the state over its respect for their autonomy.

In a 2013 Montevideo-based conference that gathered water operators from Uruguay, Colombia, and Bolivia, Bolivian-based leader of the San Miguel Km. 4 committee addressed the committees’ technical limitations: “We are more interested in the technical aspect [of water distribution] because we have the social indicators covered. In our committees we have [already implemented] participation, social control, and rotation.” The Bolivian participants overall showed greatest interest in the technical areas of chlorination, water treatment, and wastewater treatment than in any other area.

Bolivian water committees are similarly concerned with their economic organization, especially for projects that are as necessary as insurmountable given the committees’ own resources. One such project is the building of a sewage system for each committee’s jurisdiction. Other than the economic cost, the project involves difficult strategy decisions, such as the development of a larger system that would encompass other alternative water systems in the area. It is indisputable that a project of this scale will need state investment, but the state is not expected by many to respect the autonomy of the committees—or even continue to ensure universal access to water—if it is to support the expansion of the project. It instead pursues a clientelistic strategy that caters to election cycles.

After gaining visibility through his participation in the water war, Evo Morales took office in 2006, and for good reason, there was hope that his administration would broaden the autonomy and ability to self-govern for Bolivia’s social movements. Unfortunately, the opposite has happened.

Moving forward, the committees will face technical and economic challenges along with the state’s continued attempts at cooptation. But their long-lasting successes, epitomized by the water war, have demonstrated to Bolivians that in organizing horizontally, they can win back the capacity to manage their resources, carving out their autonomy against established power and traditionally understood forms of democracy. The people today are not organizing to make demands of the state, but to determine and implement the conditions of their own lives.

Marcela Olivera is a water commons organizer based in Cochabamba, Bolivia. Translated by Sebastian Muñoz-Najar Galvez.

Correction: An earlier version on this article stated that there are over two thousand residents, rather than 200 thousand, in the southern zone of Cochabama. The article has been amended to reflect this correction.