What Accounts for South America’s Resilience?

There are two competing, though not mutually exclusive, explanations for this resilience. One is that the region’s relative buoyancy is a product of the successful development of its export-oriented extractive industries, particularly mining, spurred on by high commodity prices. Another explanation stresses the successful creation of domestic markets through greater income equality.

Has the region, as some observers have argued, been able to weather the global crisis because of the rising prices of its raw materials? Evidence shows that, at best, this is only a partial explanation. For example, over the past 20 years, there has been a strong correlation between exports and GDP growth in Chile and Peru. For every 1% of export growth, GDP grows about .5% in each of those two countries. These are two cases that support the mining-export-growth argument. In Argentina, however, there is a negative correlation, which means that its GDP does not evidently grow through exports, but rather through the domestic market. Similar low correlations between exports and growth characterize the economies of Brazil and Mexico. We can say that Brazil has grown by its domestic market and that Mexico, in general, finds itself stagnant, given the equal lack of growth of its domestic market.1 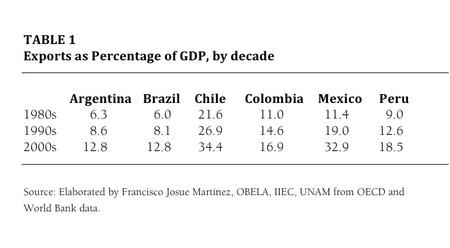 As Table 1 (left) shows, various countries have expanded their exports over the past few decades, but that does not imply that exports are the engine of macroeconomic growth. The argument that growth in general is led by exports is more ideological than empirical; it is accurate in some cases but misleading in others.2

Since 2000, there has been a boom in mining and oil investments. New investments in mining are based on the increase of mineral and petroleum prices, making oil fields more profitable. The Commodity Price Index since 2000 has followed a rising trend, which has tempted governments to allow oil-field exploitation. They hope this will spur the internal growth of their countries. Domestic market growth, however, has not always followed.3 The only two South American exceptions, as noted above, are Chile and Peru, which still follow growth policies led by exports, largely because they are mining countries that rely on this as the axis for their future. Ecuador and Bolivia may be entering this track also: Ecuador with gold mines and Bolivia with lithium beds.

This investment impulse is creating new settings of social conflict while at the same time giving space to the growth of South American domestic markets. In South America, as well as the Caribbean Basin, many countries, including Mexico, Peru, Chile, and Bolivia, with appropriate resources have encouraged investment in mining in the last three years, or have accentuated the investment pattern as in the cases of Venezuela and Ecuador, which produce oil. And now, rising global prices have made mineral investment desirable in countries that do not have abundant or easily accessible resources—countries like Panama, El Salvador, and Argentina. In addition, countries without oil, like Cuba and Argentina, have become avid explorers, attempting to secure their own energy sources.

Lastly, there are exceptional cases where the primary extractive effect serves to alleviate the crisis directly. The clearest example of this is Ecuador, which negotiated a sale of future oil to China in 2009 amounting to a third of its annual exports for a period of three years. Ecuador, which was not previously a mining country of great volume (in contrast to other Andean countries), has decided to undertake large-scale operations with major environmental and social effects on diverse ecological reserves.

On the other hand, the first decade of the 21st century shows a set of countries that have ceased to implement the policies of export growth promoted by the World Bank, turning instead to the strengthening of their domestic markets via a more progressive income distribution. As shown in Table 2 (below), between 1996 and 2009, for example, Argentina, Brazil, Costa Rica, Panama, Uruguay, and Venezuela have experienced an improvement in income distribution as measured by the income ratio between the highest and lowest deciles of the national economy, and a consequent expansion of purchasing power within the domestic market. 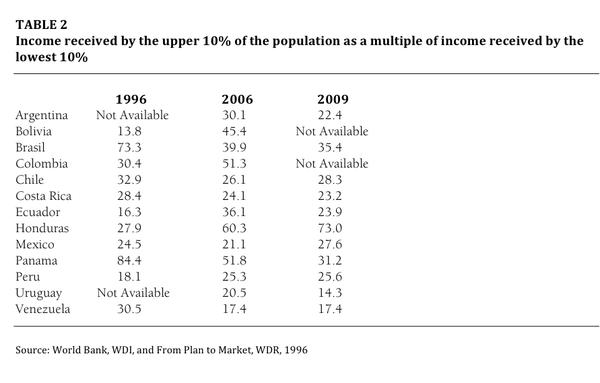 Indeed, many countries have resisted the crisis by strengthening their domestic markets. Ecuador, for example, with its improvement in income distribution, has seen a reduction in poverty, and there is a possibility that growth in the domestic market has compensated the tightening of international credit after the general credit reduction of 2009. The relevance of the domestic market is that it creates a demand for goods that are increasingly produced domestically, such as foods and basic commodities. This dynamic dampens external pressures. The exception has been Mexico after signing the NAFTA agreement, which has subsidized food imports and has created a disincentive for local production of basic products—beans, wheat, and corn—today purchased more cheaply from the United States. In exchange, Mexico exports some agricultural products like asparagus and some varieties of tomatoes to the United States. Consequently, rural household income has been damaged by the fall of wages and the lack of income in the countryside. These have been replaced by remittances sent home by Mexican workers in the United States. Remittances, on the other hand, have now been negatively affected by the U.S. crisis, which has decreased the employment of Mexican migrants, thus equally affecting the income of families in rural Mexico where consumption had already contracted.

In this context, there is a significant distinction between the countries of South America and those of the Caribbean Basin, as is shown in Table 3 (below).4 The economies of the latter tend to be linked to the U.S. economy, while the South American economies are increasingly linked to Asia. Caribbean Basin countries have also been much less successful in developing their own domestic markets. All the countries of the Americas suffered from the global credit crunch that began in 2007, but the South American countries recovered rather quickly. The GDP growth of the Caribbean Basin countries fell more precipitously in 2009 and recovered more slowly in 2010 and 2011. The most extreme downturns of 2009 were those of Mexico (-6.1% GDP growth), perhaps the most dependent on the United States, followed by Trinidad and Tobago (-3.5%) and Venezuela (-3.3%).5

The crisis was transferred from the United States to the countries of the Caribbean Basin through the reduction of trade in goods and services (especially tourism), the reduction of migrant remittances, and the reduction in long-term capital flows. In Mexico, significant counter-cyclical policies that might have served to counteract the depression were not adopted because Treasury Secretary Agustín Carstens felt that with the reduction of oil revenues, there was no assurance that loans could be repaid.6 Oil exporters like Venezuela and Mexico suffered not only from the credit crunch but also from the sharp fall in the price of their principal export product to the United States.7

The greatest impact on the Caribbean Basin was fueled by the sharp fall in oil prices in July 2008 (which did not occur with the minerals), which severely affected Mexico, Colombia, and Venezuela. The impact of the crisis can be analyzed through at least two lenses: through the main market for exports and through the degree of economic openness. The geographic division also affects migration and remittances more strongly in the Caribbean Basin due to the problem of unemployment in the United States, which has exacerbated the problem. In comparison with their sister economies of South America, the countries of the Caribbean Basin have much less room to maneuver.

Óscar Ugarteche is professor of Economics at the Autonomous University of Mexico (UNAM) and coordinator of the Latin American Economic Observatory, obela.org. He is the author, with Paul Dembinski, of Más allá de Bretton Woods: la economía transnacional en busca de nuevas instituciones (EAE—Editorial Académica Española, 2012). This article was translated by Leisha Reynolds-Ramos.

6. Testimony of Secretary of the Economy Agustín Carstens before the Mexican Chamber of Deputies, September 15, 2009. Available at canaldelcongreso.gob.mx.