Zapatismo in Chiapas and Beyond

Ryan documents his journey with an eclectic group of solidarity activists—an Italian NGO worker, a media activist, an academic, a squatter from Barcelona, and a “doctrinaire anarchist”—as they work alongside indigenous members of the Roberto Arenas Zapatista autonomous community to build a much needed water system. 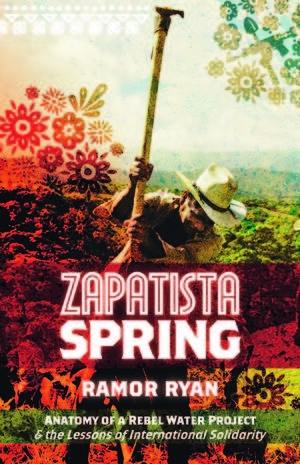 The Zapatistas’ initial welcome of the outsiders gives way to missing equipment, mosquito bites, drunken truck drivers, and the real back-breaking work of digging trenches and water canals. Although the activists are treated warmly, intercultural communication seems challenging, particularly with the women in the community. Eventually the water system is built and celebrated. But a couple of years later, three of the activists return to find that the Roberto Arenas community has succumbed to the government’s counterinsurgency land-titling program that aims to co-opt the Zapatista movement by privatizing land for outside investment and neoliberal development. The community they were in solidarity with to build the water system has left the Zapatistas to join a paramilitary organization, the Organization for the Defense of Indigenous and Campesino Rights, which was set up by the government to protect the privatized land.

Ryan’s prose is honest, punk, and painfully self-critical. His description captures the feeling of daily life in the autonomous communities. At the same time, his description of solidarity delegations reminded me of the most contradictory aspects of so-called solidarity work that I participated in and observed in Chiapas from 1999 to 2006. Ryan’s rich characters illuminate how many Europeans and North Americans try to incorporate revolutionary politics while maintaining cultures of individualism.

Ryan emphasizes the dissonances of solidarity. The protagonists purport to be dedicated to helping others, but they are self-centered individuals—nomadic, adventuring, and accountable to no one. They are self-righteous and self-proclaimed revolutionaries, but these European and North American fans of the Zapatistas demonstrate very little awareness of how individuals might effectively form a collective, make decisions, and be accountable to each other or to a larger organization.

In a well-woven theoretical interlude, Ryan juxtaposes Conrad’s Heart of Darkness with Nigerian author Chinua Achebe’s critique of Conrad. Achebe argues that Conrad’s novel is a self-centered account of the mental disintegration of one particular colonizer, which reduces Africa to the mere backdrop of the story.

“Can nobody see the preposterous and perverse arrogance,” said Achebe in a 1975 speech at the University of Massachusetts, “in thus reducing Africa to the role of props for the break-up of one petty European mind?”

Ryan, however, suggests that solidarity activists see themselves in the tradition of Irish revolutionary Roger Casement, who exposed and organized against the exploitative European rubber trade in Congo in 1904. That is, in Ryan’s words, like Casement, they attempt to use their privilege as a “weapon for justice against the marauding imperialism.”

But Ryan doesn’t convince me that the solidarity activists achieve Casement’s ideal. Nor am I convinced that using one’s privilege to expose exploitative trade practices is all we can hope for in the practice of international solidarity.

In spite of his critique of Conrad, Ryan self-consciously uses Chiapas as a backdrop for the drama and disintegration of European and U.S. activists, as Conrad used Africa. His story focuses on self-centered solidarity workers and their ideological tensions. The narrative climax is an argument among them, a put-a-snake-in-his-bed prank gone wrong. The water system is built, but the solidarity project is ultimately impotent in the face of the government counterinsurgency strategy. Instead of offering, as the Zapatistas do, ways to resist colonial dynamics, Ryan’s text offers literary allusion, description, and paralyzing contradictions.

Zapatista Spring serves as an eye-opening, cautionary tale to solidarity activists around the world. I value how Ryan pushes his readers to wrestle with the contradictions of solidarity work, and I appreciate his rich description of the Chiapas that is visible to solidarity tourists. I question whether younger readers can navigate between the self-critique and self-congratulatory posture of the solidarity workers. If you choose Ryan as a teaching text, consider supplementing it with other readings that offer pathways through the contradictions. Otherwise it’s too easy to end up in a nihilist, postmodern swamp with no plausible routes out of the politics of neoliberal counterinsurgency.

Is it that Ryan chronicled a particularly lousy bunch of solidarity workers? Probably not. But his choice to focus on this eclectic grouping means that his chronicle misses some of the key aspects of the Zapatista movement, such as Zapatista-led political education and independent media.

The strength of Zapatista political education is that it is led by people who have developed a common analysis of the breadth and depth of the forces they are up against. Since their 1994 uprising, grassroots organizations throughout the Americas have learned from the Zapatistas. Surely solidarity delegations of unaffiliated individuals accomplish some political education, but there is greater accountability when participants are from organized collectives. Political education also has longer-term impacts when pathways are created for organizational learning.

For example, Zapatista organizations and their sympathizers have led and organized encuentros, or regional and international conferences, such as the Conference Against Plan Puebla-Panamá, Convergence of Popular Movements of the Americas, or the Conference Against the Free Trade Area of the Americas. Organizations in and beyond Mexico practice collective forms of political education by learning from Zapatista principles. Some of these include Tzome Ixuk, an indigenous Tojolabal women’s collective in Las Margaritas, Casa del Pueblo in Los Angeles, the Media Mobilizing Project (MMP) in Philadelphia, and the Movement for Justice in El Barrio in New York (see page 27).1

Organizers around the world have also learned from the Zapatistas’ use of media. It is worth noting that those charged with repressing the movement recognize the Zapatistas’ media savvy. In a study for the RAND Corporation (a think tank first established by the Douglas Aircraft Company to conduct research and analysis for the U.S. military), researchers John Arquilla and David Ronfelt describe the Zapatista strategy as “social netwar”—the creation and transmission of counter-narratives through social and electronic networks. They caution the U.S. armed forces and government that this information-age form of conflict is the greatest threat represented by the Zapatista movement.

Some movement organizers in the United States reflect on the power of netwar to shape communication strategy. MMP is working to develop a communications infrastructure for building a broad-based movement of the poor and dispossessed to end poverty. They are able to connect many different subjects—high school students from the Philadelphia Student Union, members of the Taxi Drivers Alliance, parents of children in Head Start (the federally funded service program for low-income children and their families)—to tell their stories and show how all their experiences of struggle are connected.

While Ryan’s description of building the Roberto Arenas water system is an antidote to the often self-congratulatory proponents of international Zapatismo, I would recommend that this text be read together with other books that provide a broader look at the Zapatistas’ revolutionary activities and explain their powerful lessons for movements around the world.