Narcotrafficking is a bloody business throughout Latin America, but less so in Bolivia. 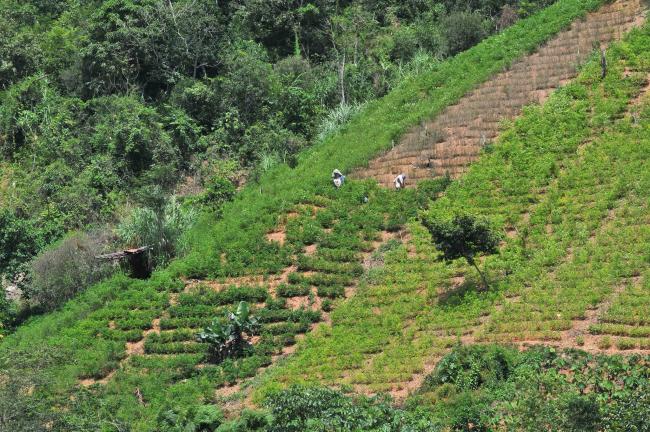 This article was co-published with Latin America News Dispatch.

Lurching along cobbled roads in Bolivia’s Chapare region on his mud splattered motorbike, coca farmer Umberto Flores searched for his relatives and friends because he had coca seedlings ready to plant but needed more help. Eventually his nephew, Angel, agreed to join him within the hour. He had to—Umberto was his padrino, or godfather. Umberto told Angel that soon he would be going on another “trip” and invited him to join him, a subtext Angel understood immediately as referring to processing cocaine paste, the first step to refining pure cocaine.

In Bolivia’s lowland Chapare region, much of the population grows, dries, and sells coca leaf, and some directly process cocaine paste or smuggle the final product. However, Bolivia is the one country in the Americas that has avoided much of the violence so commonly associated with drug production.

In Colombia, for example, incoming president Gustavo Petro is determined to shake up the country’s U.S.-driven 30-year war on drugs that has failed to reduce the flow of drugs northward while bringing repression, violence, fumigation, and forced eradication to those at the bottom of the drug hierarchy: the peasant farmers who grow coca leaf. His administration might do well to take a look at Bolivia.

“This is not Mexico; this is not Brazil!” insisted a retired police official who asked to remain anonymous. “We do not see extreme violence over the control of territory here. Occasionally we see the settling of scores, but they are only ever isolated incidents.” The reasons for this noticeable lack of violence lie in how the drug trade is embedded in local cultural norms and values.

Umberto embodies this. He first got involved in the drug trade 30 years ago in high school. Working with his uncle, he soaked shredded coca leaf in solvents to extract the cocaine alkaloid. Sometimes he traveled by bus to the lowland city of Santa Cruz with two kilos of paste stashed in his bag. “For one kilo, you got $100. It was easy—there wasn’t a lot of control,” he said.

But then when he was 20, he carried five kilos of cocaine to Brazil and was caught. Umberto was locked up for two and a half years. “They are very violent there,” he said, putting two fingers in the air to imitate a gun.

For Umberto and Bolivians like him in tropical agricultural zones, involvement in the cocaine trade is a mundane affair, a commonsense way to make money in a place where turning a profit from farming is tough.  “We all live from this,” he explained. “We protect it...It generates work.” The drug trade in Bolivia, he said, was nothing like Brazil: “Here it is peaceful. We look after each other; we respect each other.”

For Chapareños, to be entangled with one another through debt and obligations is the very basis of sociality. Reciprocity, writes anthropologist Catherine Allen, is the “pump at the heart of Andean life,” with responsibility for community and kinship relationships falling mostly on women. Anyone who gets ahead is forced to reinvest surplus back into the community. These age-old customs, that infuse coca growers’ involvement in illicit activities often explicitly exclude outsiders while successfully coexisting with market-oriented strategies.

Seventy-three year old Silvio Zavala remembers how his family migrated to the Chapare in the 1960s, clearing land and planting maize, rice, and some coca. “We practiced ayni: it’s reciprocity. One day, I work for you and another day you work for me—all with no pay,” he said.

While Indigenous peasant drug workers rarely get rich, the trade nonetheless represents an avenue for unparalleled social mobility even if these drug workers rarely act as profit-maximizing individuals. Working together as a corporate unit ensures the community a steady production of coca and cocaine paste for the benefit of all. Far from generating chaos, disorder, and inequality, the illegal drug trade contributes to the Chapare region’s prosperity and stability.

When Silvio first moved to the Chapare, “people had anemia, kids’ bellies were always swollen—the aim was just to survive. We grew coca, it was the only thing that made sense. We cut out our own roads, built our own schools, made our own laws,” he said. Self-governing unions became the local government, controlling land tenure and administering justice.

Coca growers normally only admitted people they already knew into their unions. These were usually extended kinship networks of neighbors from the highlands and old friends. Disagreements, including robbery, boundary disputes, or outstanding debts are still resolved at community-wide union meetings.

“When we say something, we make people respect it. We are very strict,” said Chapare coca farmer Alfredo Higuera. “If you are expelled from the union, you lose your land, your family, your neighbors—it is like you are an orphan.”

During the 1980s, the booming U.S. cocaine market pushed up the price of coca and attracted impoverished Bolivians to the Chapare in droves. People knew where the coca leaf that they processed into drugs ended up even as they used it to heal themselves, to make offerings to deities, and in divination ceremonies. When coca growers insist that “coca is not cocaine,” they are stating a heartfelt truth: sure, it can be cocaine, but that is not its essence.

In 1986, U.S.-financed repression began in earnest. Twenty years of economic hardship and human rights violations later, Evo Morales and the coca grower unions political party, the Movement Towards Socialism, won a landslide victory in the 2005 national election, thrusting Morales into power for the next 14 years. Morales continued a policy adopted in 2004 that legalized growing a small amount of leaf. This encouraged coca unions to self-police and front-loaded development assistance to allow economic diversification. “One reason the drug trade remains peaceful in Bolivia is precisely because of the government’s harm-reduction approach,” argued a retired anti-drug police officer.

Unlike Colombia, where armed groups dominate the trade, in the Chapare, no single person, family clan, or gang has ever been in control. Fifty-year old Ivan Choque has worked producing cocaine paste most of his life. “Everyone directly or indirectly involved is from here,” he explained.

Coca farmers produce anywhere between four to eight 25-kilo sacks of leaf every three to four months. To transform this into paste, the equipment is cheap, the skills easy to learn, and the chemicals available at a hardware store or gas station.

But only local people have the necessary relationships to succeed. Because the union controls access to land, only its members can grow coca. They sell their crop to mostly women coca merchants who are part of their extended kin-group. In return, merchants provide farmers with cash advances and act as godparents to their children.

The next step is paste production, which requires gasoline. However, local gas stations are only allowed to sell one tank per car per day, and police at checkpoints search vehicles and impound suspicious chemicals. As a result, taxi drivers smuggle fuel; almost all are coca growers. They only sell to people they are tied to through kinship or who are close acquaintances.

“Trusted” young men then make the paste, guided by a more experienced “cook.” On the top rung are the acopiadores (collectors), wealthier local farmers who transport bricks of cocaine paste to either the city or remote jungle refineries. The acopiador, too, is part of the web of godparenthood relationships.

“I have to sell to my padrino,” explained Umberto. “He paid for my wedding, so of course I must!” Hormigas (ants) smuggle out one or two kilos at a time.

Those directly involved in drug production earn more money and are under strong pressure to pay for school graduation trips, a band for a fiesta, or matching uniforms for the local football team. Anyone with surplus cash who does not invest in social relations is considered immoral. Drug workers with a great many “godchildren” are held in high esteem and deemed worthy of community protection. This guarantees them both a steady supply of coca leaf or chemicals and no local interference.

Outsiders are treated with great suspicion, and anyone thought to be acting against the community’s interests can suffer vigilante justice, such as being stripped naked and tied to the palo santo, a tree that is home to thousands of poisonous biting ants. Most coca growers support this approach, believing that violent punishment acts as a strong deterrent. “Criminals are afraid to come here” and “they don’t dare commit crime here,” are repeated frequently.

The coca unions also resist state control. If the police fail to ask permission to enter an area from a union leader, they run the risk of violent assault. A local police commander complained, “We have the law on our side, but the unions have more power. They decide who comes and who goes.”

While Bolivia is the only country in Latin America with low drug violence, other communities in the Americas have seen similar success. In the highland region of the southern Mexico state of Oaxaca, geographer Gabriel Tamariz found that strong community organizations allowed Indigenous peasant farmers to successfully resist the incursions of marijuana and opium poppy traffickers. With 75 percent of land owned by rural communities, he argues that “communal land ownership and the community assembly have been particularly significant in…negotiating government ‘eradication’ of [drug] crops and relationships with drug trafficking organizations.” This resonates with the history of Mexico’s drug trade where “up to the 1970s, violence was rarely employed to sort out disputes between drug traffickers,” writes historian Benjamin Smith, “Deep ties of blood, marriage, friendship and neighborhood…prevented the frequent use of force.”

To make cocaine (known locally as la fina), cocaine paste passes through a second and more complex stage of processing. It requires skill, equipment, and industrial chemicals that are difficult to come by. Start-up costs are high, somewhere between $150,000 and $300,000.

Over recent years, crystallization labs have crept south into the Chapare. Local security forces have discovered and destroyed several mega laboratories, some of which can process up to 500 kilos of pure cocaine per day. In communities where the labs are located, traffickers pay the local villagers up to $500 a week for work and protection.

Chapare locals worry about this expansion.

“Violence is reaching us, bit by bit,” warned Ivan. “The armed guards who protect la fina will not hesitate to silence anyone.” The larger investments, concentrations of capital in fewer hands, and faceless dealers, rupture long-standing reciprocal relationships.

“Before, drug trafficking was more communal,” Ivan said. “We all shared the benefits.”

Linda Farthing's latest book is Coup: A Story of Violence and Resistance in Bolivia, co-authored with Thomas Becker (Haymarket, 2021). She has also written on Bolivia for The Guardian, Al Jazeera, and The Nation.