While the Biden administration struggles to impugn Trump for his attempted coup, its approach to Bolivia is undermining that country’s efforts to bring their own coup perpetrators to justice. 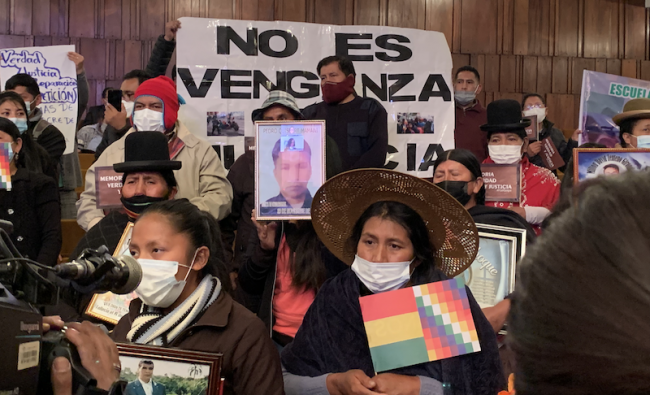 On June 10, a Bolivian court sentenced former de facto president of Bolivia, Jeanine Áñez, to 10 years in prison. Áñez took power during a coup in November 2019 that ousted the country’s popular Indigenous president, Evo Morales, sending him into exile. During a tumultuous year in office, her government killed dozens of civilians, persecuted members of Morales’s MAS party, and confronted the Covid-19 pandemic with incompetence and corruption.

Áñez has yet to be tried for the killings. The recent sentence focuses on the constitutional rupture and the failure to abide by congressional procedure. Given the pattern of impunity that has followed new forms of coups used by the Right to oust progressive leaders or thwart electoral results in the region in recent years, the ruling is a major victory.

Curiously, while in the United States Donald Trump’s own January 6, 2021 coup attempt has failed to galvanize widespread demands for his incarceration, in Bolivia quite the opposite is true. Áñez managed to stay in office for 11 months, postponing new elections three times under the pretext of the pandemic. They were 11 months of violence and corruption. Her right-hand man, Arturo Murillo, spearheaded a money-laundering ring tied to the purchase of teargas for political repression; he is now in a Miami federal detention center awaiting trial. Other members of her cabinet doled out money and land to themselves and pushed to sell off public companies. The unelected coup government—whose only task should have been to oversee new elections—also made domestic and foreign policy changes, attempting to roll back the country’s progressive turn as fast as possible. Yet, most Bolivians rejected this abusive governance. When the country finally held new elections in October 2021, Morales’s party returned to the presidency in a landslide. 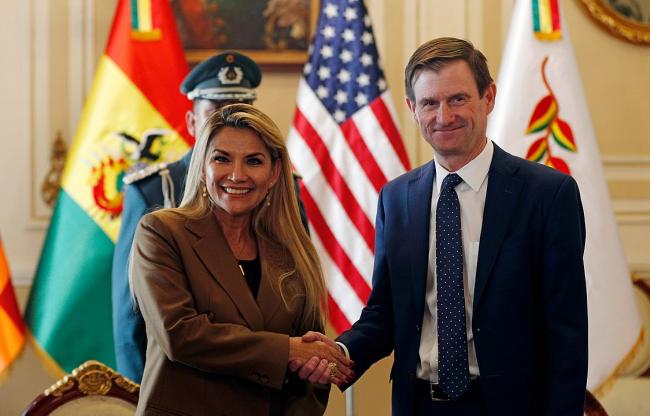 Many of Áñez’s collaborators fled the country before and immediately after the 2021 elections. Áñez, for her part, attempted to stave off prosecution by running for governor of her home state, Beni. In a widespread rejection of her time as president, she garnered only 12 percent of the vote. The new president, Luís Arce, took over in November. In December, the attorney general filed lawsuits against Áñez for sedition and conspiracy, though the sedition charge was later eliminated. Police arrested her in her neighborhood in the Amazonian city of Trinidad in March 2021. The court held her in pretrial detention along with several cabinet ministers, as well as members of the military and police high command that had illegally asked for Morales’s resignation.

The legal investigation showed that the military and police commanders facilitated the coup that Áñez consummated by naming herself president. Academic experts concur that the pronouncements of the military and the refusal of the police to keep order made it so. Defenders of Áñez say that the military merely “recommended” that Morales step down and that Añez saved the country by filling the vacuum of power. But as detailed in the report of the Inter-American Human Rights Commission expert group, the GIEI, any military or police intervention in political processes is illegal, since it ruptures civilian oversight. As the GIEI wrote in a detailed investigative report published in 2021, “The ability of these institutions to take armed action makes the difference between a recommendation and an ultimatum merely semantic.”

As the trial finally came to an end, judges based their conviction on the violation of the constitution, dereliction of duties as a senator, and failure to follow congressional procedure—actions also described in the GIEI report. Not to mention that her proclamation, made in a Congress with no quorum, was facilitated by the statements and logistical support from the military and the mutiny of the national police, as well as by threats and acts of violence against the families of MAS officials in the constitutional line of succession. Despite this, coup apologists continue to argue that Áñez acted legally—or at least had little choice but to break some rules when she stepped in. By their account, she is innocent. But according to Bolivian courts and a wide range of international experts, she is not.

Given the United States’ experience with Trump’s attempts to overturn the 2020 election and January 6, it is dumbfounding that the Biden administration—along with several “moderate” Democratic senators, including Dick Durbin, and, unsurprisingly, Republicans like Ted Cruz and Marco Rubio—have joined forces to criticize Bolivia for imprisoning the coup leader. What is more surprising are the parallels.

Trump argued that there was fraud since early returns had him in the lead (the “red mirage”) while later returns and mail-in ballots gave the advantage to Biden (the “blue shift”).  When Trump and his cronies began crying fraud before and after the vote—an accusation similarly thrown at Morales in Bolivia even months before the elections were held—they managed to convince a significant set of the population that fraud had occurred. In the United States, this led to the violence of January 6. In Bolivia, where a similar shift between early and late returns favored Morales, accusations of fraud sent anti-Morales Bolivians into the streets. Experts examined the fraud accusations and the statistical data behind the voting patterns and concluded that Morales’s late surge in votes, as with Biden’s late comeback in key states, was predictable. It was not evidence of fraud.

In the United States, fortunately, some Republican leaders rejected the move, and the police attempted to maintain order against the attacks of violent, organized right-wing groups, frustrating the coup. But in Bolivia, like the Proud Boys, Oath Keepers, and other paramilitary-style groups, armed right-wing gangs also went into action to intimidate Indigenous people and Morales’s supporters, working in tandem with the military while the police stepped aside. The coup succeeded.

In both countries, fake news and social media fueled the flames. In Bolivia, this included U.S. actors like a company called CLS Strategies, hired after the elections to propagate fake Facebook posts in defense of the de facto regime. Remarkably, a senior advisor of CLS Strategies at that time, Mark Feierstein, would go on to work as principal advisor to Samantha Powers, the current head of the United States Agency for International Development (USAID) until April 2022.

Among other actors in the Biden administration who seem to be apologists for the coup, U.S. Secretary of State Anthony Blinken tweeted about “concerns” after Áñez’s detention, demanding that she and other former regime officials be released. He also suggested—with no irony—that the Bolivian government was acting anti-democratically. Despite ongoing suggestions that Añez did not have due process, the Inter-American Commission of Human Rights, in response to a petition from Áñez herself, ruled last October that her rights were being protected.

In March 2022, the U.S. Congress approved a new spending bill that included language calling on the State Department to assess the experts’ reports on both the 2019 election fraud claims and the human rights abuses committed under the coup regime. The Biden administration appears to be dragging its feet. Statements and actions by officials in Washington seem to be going in the opposite direction, even with the report deadline less than a month away.

For instance, in the first week of June, Biden’s head of Andean Affairs, Joaquin Montserrate, went to Bolivia to talk about a proposal to exchange ambassadors. Then came the revelation that the United States pick for ambassador would be Francisco Palmieri, a former assistant secretary of state under Trump and more recently the principal advisor to the commander of the U.S. Army’s Southern Command. Both raised red flags in La Paz, and the Bolivians cancelled the meeting.

While in La Paz, Montserrate was asked by a Bolivian reporter if what had happened in Bolivia had been a coup. Montserrate, who clearly had not read the GIEI report, responded that “we follow the reports of the experts” and the “group of experts” said “there was no such coup.” The first statement is grossly inaccurate, and the latter, demonstrably false.

This uninformed coup denialism by high-level U.S. government officials undermines both the truth and efforts at normalizing relations. The refusal to acknowledge the facts, or even read the lengthy GIEI report is confounding—even moreso since the Biden administration funded the GIEI report under progressive pressure and echoed the GIEI’s demand to dismantle violent armed gangs, still operating after the coup.

These actions, statements, and decisions suggest, at best, a lack of insight on the tumultuous history of bilateral relations, or, at worst an effort to exacerbate frictions to isolate Bolivia and destabilize the government, as the United States has tried to do with Venezuela.

Fast forward to this week. While U.S. public hearings try to undo Trump’s fraud narrative, the Biden administration appears to take the opposite position on Bolivia. With Áñez’s official sentence expected to be released on June 17, it remains to be seen if this pattern of blunder and bluster on the U.S. side will continue when we see the official response of the U.S. State Department.

To be sure, there are pragmatic forces and actors in the U.S. Congress and the U.S. administration who understand that it is better to support Bolivia in the pursuit of justice and focus on humanitarian and commercial relations. There are actors on both sides interested in constructing a mutually beneficial and respectful bilateral relationship. Yet between the militarists of the Blob and the entrenched networks of old Latin America hawks in both parties, future mistakes and polarization seem probable. The United States now risks further alienating what little support it might have regained after the departure of Trump and appears to be set on confirming what many Bolivians already think: the United States is struggling to hold on to what little imperialist power it has left and is worthy of nothing more than outright resistance.

Bret Gustafson is a Professor of Anthropology at Washington University in St. Louis, a member of the NACLA Executive Editorial team and the author of Bolivia in the Age of Gas.

Kathryn Ledebur is the director of the Andean Information Network, a human rights organization based in Cochabamba, Bolivia, and writes extensively on drug policy and human rights in the Andes.