State-sponsored crime is neither unique nor exceptional. In fact, as the prominent sociologist Charles Tilly pointed out, the history of the nation state has been violent. This violence has been harnessed over time to serve the interests of capital—as was the case of Europe. Colombia is no exception.
Tweet
Nazih Richani
Cuadernos Colombianos
6/13/2011

State-sponsored crime is neither unique nor exceptional. In fact, as the prominent sociologist Charles Tilly pointed out, the history of the nation state has been violent. This violence has been harnessed over time to serve the interests of capital—as was the case of Europe.

Colombia is no exception. 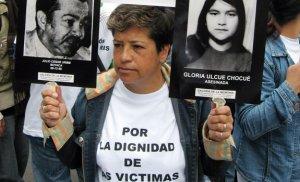 (Credit: edunewscolombia.com)Last Friday, Colombian president Juan Manuel Santos signed into effect the new Victims’ Law, which permits the Colombian government to compensate victims for harm caused by Colombia’s decades-long internal armed conflict. However, another law—the new Bill of Fiscal Sustainability—is currently also under consideration by the Colombian Congress. If approved, it could completely undermine the potential progress from the Victims’ Law.

In order to explain how, let’s look at some specific historical characteristics of Colombia, and how they relate to these laws.

For starters, the Colombian state has intermittently engaged in violent acts against civilians and political opponents since the early 20th century. This increased in intensity during “La Violencia” 1946-1958, and since then has occurred either directly or by proxy through right-wing paramilitary groups. During the latter phase, which extends from the early 1980s until today, hundred of thousands of people were victims of state violence or its paramilitary instruments. All of this violence was employed to protect and defend the owners of capital and their ability to continue to accumulate wealth. Consequently, if the state were to accept guilt it would be obligated to compensate the victims. But this would also mean that the state would have to amass enough resources to provide justice for its victims. This could only occur at the expense of the same owners of capital that the violence was originally supposed to protect.

Here is the other catch. While the Victims' Law calls for “compensation and restitution of lost lands,” the new project—if approved—is designed to shelter the state’s coffers from victims’ claims under the guise of “Fiscal Sustainability.” The issue here is over who is to define fiscal sustainability. Would the IMF and dominant social classes define it, or would the victims of state violence?

You can take a guess.