On the Enemies List: Arms Dealers, the PRI, and the Pacifists

Last weekend, while in California, Mexico’s free-trading, conservative president, Felipe Calderón identified some of his principal political enemies: U.S. Arms Dealers, the Institutional Revolutionary Party (PRI) and Mexican pacifists. He named no names, but the identities were clear. He was invited to Palo Alto to deliver Sunday’s commencement address at Stanford University. A portion of his speech included a sharp, campaign-style attack on Mexico’s once, but no longer dominant PRI.
Tweet
Fred Rosen
Mexico, Bewildered and Contested
6/14/2011

Last weekend, while in California, Mexico’s free-trading, conservative president, Felipe Calderón identified some of his principal political enemies: U.S. Arms Dealers, the Institutional Revolutionary Party (PRI), and Mexican pacifists. He named no names, but the identities were clear.

He was invited to Palo Alto to deliver Sunday’s commencement address at Stanford University. A portion of his speech included a sharp, campaign-style attack on Mexico’s once, but no longer dominant PRI. 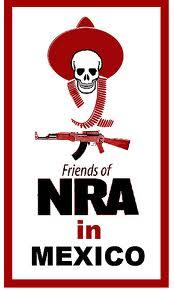 He spoke of his country’s autocratic past, in which the state not only massacred students, but disappeared opponents. He recalled that not so long ago, “Mexico had an autocratic regime; all the state governors and all the senators were from the same party. For many decades this party controlled everything: that which the media were allowed to report, what could be taught in the schools, what rock concerts were permitted, everything. When students like yourselves protested, they were massacred; many opponents of the regime were simply disappeared.”

Criticized for politicizing a commencement address, he later said he simply wanted to differentiate Mexico’s autocratic past from the “humanist” governments of his conservative National Action Party (PAN).

The night before the Stanford speech, speaking to some 600 Mexican migrants in San Jose, California, President Calderón railed against U.S. arms dealers. He accused the industry of responsibility for thousands of deaths in Mexico. The free-market president asked and answered his own question: What motivates the mercenary acts of the industry? “I’ll tell you clearly. It’s for monetary gain.”

At the same time, responding to the calls of Mexico’s anti-drug-war movement for an end to the militarization of the country, he warned that it was impossible for his government to ignore the growing influence of organized crime in Mexico; he defended his ordering of the armed forces onto the streets of Mexico.

For Mexico’s humanist president, it has come down to strength against strength, force against force. He praised the police and military forces under his command, and insisted that his struggle would not be a losing one. The opponents of his escalation of the war against organized crime, he said, had nothing more to say than “No,” the criminals were too powerful to be combated. But he had answers to all those “No’s”: “ ‘No, because they have very powerful weapons,’ but we have weapons that are even more powerful. ‘No, because they have a sophisticated organization,’ but we also have organizations that are very sophisticated, very strong, very disciplined: the Mexican Army and the Mexican Navy and the Federal Police. All the force of the state.”

The problem, as Mexicans from across the political spectrum point out on a daily basis, is that since the president militarized the “war” against drugs and organized crime upon taking office in late 2006, drug trafficking cartels and their violent spin-offs have gotten bigger, bolder and more numerous. On its own terms, Calderón’s war against drugs and organized crime has yet to achieve any level of success; on Calderón’s watch, the country has suffered through a dramatically rising level of insecurity.

Mexico’s peace movement, an ongoing National March for Peace with Justice and Dignity has called for less military presence rather than more. Led by the poet Javier Sicilia, who lost his son to the violence, the most recent expression of the National March was a caravan that threaded its way last week from Mexico City up to Ciudad Juárez, stopping along the way to hear testimony from people who had lost family members to the violence. At the march’s end, Sicilia, briefly crossing the border to El Paso, called for an end of the militarization of the country. He condemned the silence of the U.S. government in the face of the powerful arms industry and the horrors it had wrought, exporting arms—both legal and illegal; both for the armed forces and for organized crime—into Mexico.

Sicilia’s “pacifist” discourse has been echoed lately by a prominent member of the PAN, former president Vicente Fox.

Over the same weekend, back in Mexico, Fox opined that the War on Drugs was properly a U.S. war for which Mexicans were, “paying blood, death and violence… This task is theirs, that drugs don’t circulate in the United States.”

Speaking to reporters in Xalapa, Veracruz, Fox said he had suggested to Calderón that there were more efficient ways of combating crime than to have the military patrolling the streets. The job, he said, would be more efficiently done if it were “delegated to state, federal and municipal police.”

“My stance and my proposal is to urgently legalize the consumption of drugs and get out of this trap and strange mix of health and violence, depriving the cartels of those billions and billions of dollars they receive in the North American market…”

Another “enemy” had spoken.