There have been different responses to increased immigration over the Arizona-Mexico border on the Tohono O'odham Nation. One has been the dramatic increase of federal immigration enforcement agents and technology on the Nation. The other has been an attempt to put water along migrant routes, in attempt to stop migrant deaths. All of this has taken place on a Native American reservation, whose aboriginal land has been divided by the U.S.-Mexico border.
Tweet
Todd Miller
Border Wars
6/22/2011

Patrolling in desert camouflage for human and drug smugglers, and armed with M-4 machine guns, the Immigration and Custom Enforcement Shadow Wolves are emblematic of the dramatic post 9/11 increase of militarization on the Tohono O’odham Nation, which covers 2.8 million square acres (comparable to the state of Connecticut) along a 75-mile stretch of the Arizona-Mexico border west of Nogales.

Despite being formed in 1974, the Native American Shadow Wolves (known for their tracking abilities) fit snuggly into the modern boundary enforcement build-up by the U.S. federal government on the Nation. According to the Tohono O’odham Legislative Council, the Nation’s government has supported “on-reservation immigration checkpoints,” and “integrated radar and camera systems for border enforcement,” including surveillance towers built by Boeing corporation for the (now-cancelled)  SBInet project. They have also supported a “joint-use law enforcement facility operated by the Nation’s police and Customs and Border Protection, limited deployment of National Guard in support of border enforcement efforts, and border vehicle barriers and related infrastructure.” 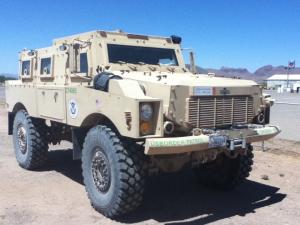 Similar Border Patrol vehicles to this one I saw in Douglas, Arizona are surely present on the Nation.

All of this enforces a boundary placed right in the middle of Tohono O’odham territory in 1854 after the Gadsen Purchase – the final chunk of land (now Southern Arizona) acquired by the United States following the 1846-48 invasion of Mexico, which forced Mexico to cede nearly 50% of its northern territory. Now, according to Tohono O’odham Mike Wilson, the Nation is ground-zero for the entrance of undocumented migration into the United States, and today there are more migrant remains found on the Nation’s land than any other part of the Arizona-Mexico border.  In the summer months Arizona’s unbearable desert heat is deadly and makes it impossible for migrants to carry enough water for their long journeys to get past the immigration check points both on and surrounding the Nation. 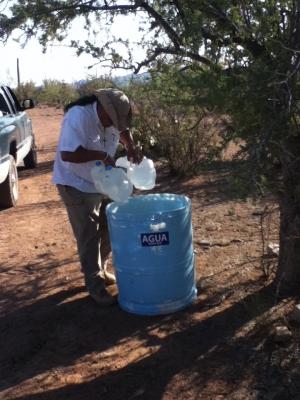 Mike WilsonWilson has responded to this by putting water in five different stations on the Nation, all against both the Nation's Legislative and District Council and Border Patrol wishes. The federal government has responded to increased undocumented migration by putting the ever-increasing border-enforcement resources at its disposal onto the Nation’s land. The Border Patrol’s presence is so strong and all-encompassing that Wilson described it to me as an “occupying force” and an “imposition.” Many Tohono O’odham complain of systematic Border Patrol harassment and abuse, including the detention and deportation of O’odham members.

University of Arizona scholar Raquel Rubio-Goldsmith raised the question to me that border policy might be "designed on purpose" to funnel migrants into the "Tohono O'odham reservation, an isolated, vulnerable region where Border Patrol can run ripshod, with no one telling them what to do."

The impacts and strategy of the boundary-enforcement policy on the Tohono O'odham Nation are rarely discussed with any depth in the media. In fact, the Shadow Wolves story has become quite public relations-savvy. As depicted in this National Geographic video named Border Warriors, this group of 11 Native American men - among them Navajo, Sioux, and Tohono O’odham – tracking drug smugglers on the Nation has become another securing-our-border success story.