From May 30 to June 5, I participated in the Migrant Trail Walk, a 75 mile walk from the U.S.-Mexico border to Tucson, Arizona, traversing the Altar Valley, one of the hottest stretches in the Sonoran desert during the summer months. This eighth annual walk was done in solidarity with the thousands of migrants who cross into the United States clandestinely, and in remembrance of the thousands whose bodies have been recovered, many in the same vast desert where we walked.
Tweet
Todd Miller
Border Wars
6/8/2011

From May 30 to June 5, I participated in the Migrant Trail Walk, a 75 mile walk from the U.S.-Mexico border to Tucson, Arizona, traversing the Altar Valley, one of the hottest stretches in the Sonoran desert during the summer months. This eighth annual walk was, as always, done in solidarity with the thousands upon thousands of migrants who cross into the United States clandestinely, and in remembrance of the thousands whose bodies have been recovered, many in the same vast desert where we walked.

In no way could we as walkers even come close to imitating what migrants really do when they cross the international divide: we had support vehicles, we had abundant food and water, and we didn’t have the fear.

There were, however, certain instances during the walk that gave me pause, and a small glimpse into that migrant reality. For example, there was the time my left leg cramped up while I was walking. When it did, I thought I could walk through the pain. However, the group was moving at a good clip, and the faster I moved on my cramped calf, the more excruciating the pain. I fell way to the back of the line, and couldn’t keep up. I finally gave up and got into one of the many support vehicles that accompanied us.

My first reflection was that if I had been a migrant I might’ve fallen way behind, and in that heat, which was coming down at an almost unbearable 102 degrees, and without too much water or food, I might’ve been as good as dead.

My second reflection was more of a question: How on earth has the situation come to this? A simple leg cramp, generally shrugged off with a little rest, should never result in death.

But in the borderlands new rules apply, forcing migrants to continue moving regardless. They don’t have the luxury of resting, they don't have support vehicles. This photo essay not only documents the 75 miles of this walk, it also looks at the multi-faceted border enforcement apparatus that, with its sheer force, is imposing these new rules. 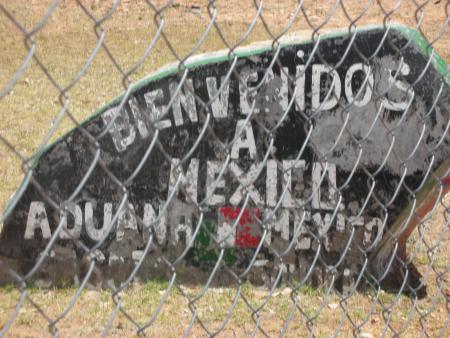 On May 30, 58 walkers and dozens of supporters began the walk on the Mexican side. 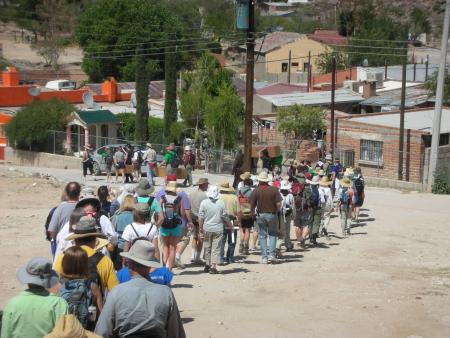 As we walked down this hill in Sásabe, Sonora we passed a group of approximately 15 men who looked like they were about to cross the border clandestinely. Unlike us, they were lugging everything on their bodies, including water. In the Arizona summer it is impossible to carry enough water needed for the multi-day trek through the desert. 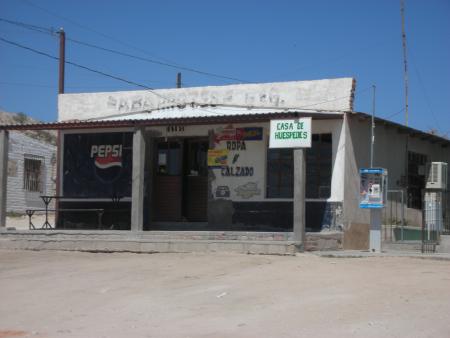 A small grocery store on the Mexican side also serves as a Casa de Huespedes, where migrants can stay before crossing into the United States. Thousands of migrants continue to enter the United States in this area, although increased border enforcement is pushing many even further west, into more desolate and dangerous regions. 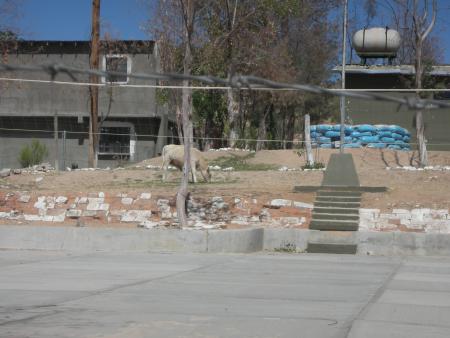 Military barracks in Sásabe, Sonora are a reminder that the border is also a focal point of the drug war for both the U.S. and Mexican governments. Approximately 36,000 people have been killed in Mexico from drug violence since Mexican president Felipe Calderón took office in December 2006. 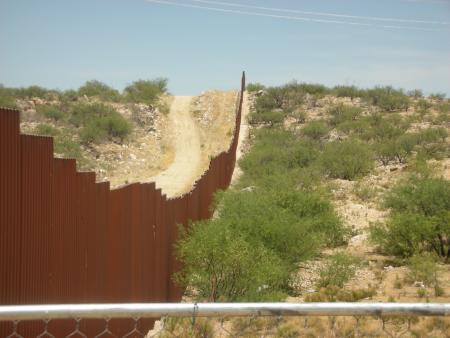 As with most border crossing points, the port of entry in Sásabe comes with a 13 mile long border wall, constructed by a private Phoenix contractor, after the “Secure Fence Act of 2006” mandated the construction of 700 miles of walls along the entire U.S.-Mexico border. 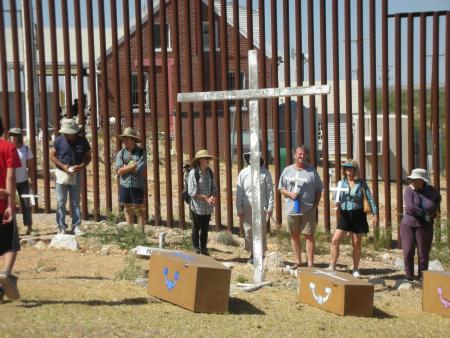 A cross and three coffins were laid in front of the Sásabe fence as part of a ceremony before the walkers made the border crossing. Approximately 6,000 bodies of migrants have been recovered since Border Patrol started its “deterrence” policy in the mid-1990s. In the Arizona desert at least 200 bodies are recovered each year. And there are many bodies that are most likely never found. 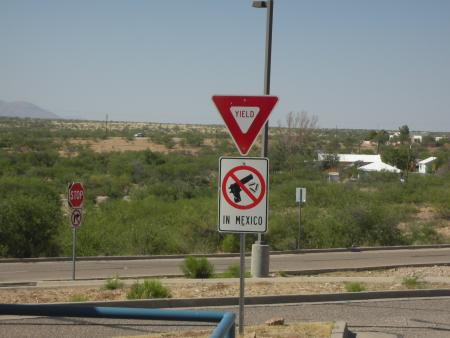 A tender reminder that guns are not allowed in Mexico. That is, unless you are U.S. government officials allowing assault rifles to get to the drug cartels. 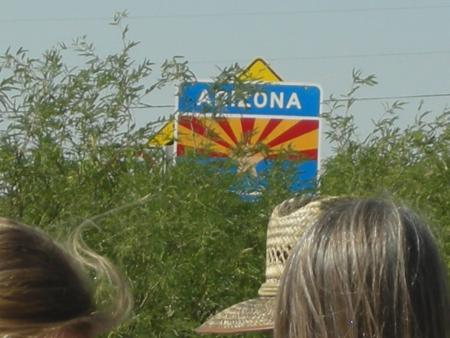 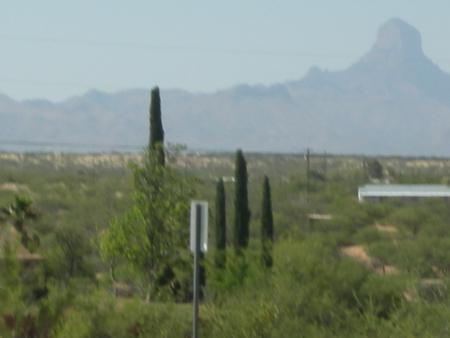 The Baboquivari peak is the spiritual center of the Tohono O’odham Nation. The international border placed between the United States and Mexico in 1854 divided the Tohono O’odham land in two. During the walk this prominent peak was a constant companion, and for years and years has been one of the principal landmarks used by coyotes as they guide migrants through the desert. 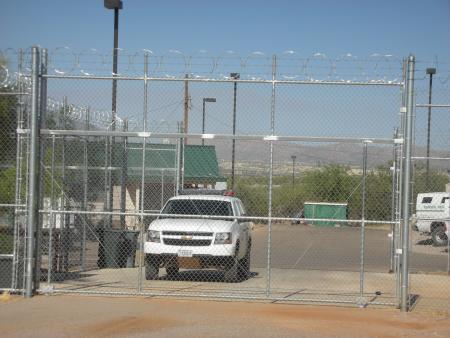 Along with Sásabe’s new fence came a Border Patrol substation on the Arizona side. When we walked past this station besides Border Patrol agents, I saw two men entering a building dressed in military fatigues. Most likely they were National Guard troops, who will not be going away any time soon. 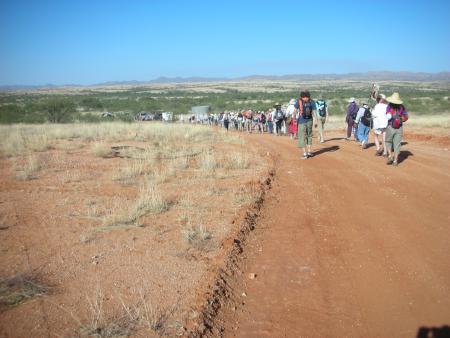 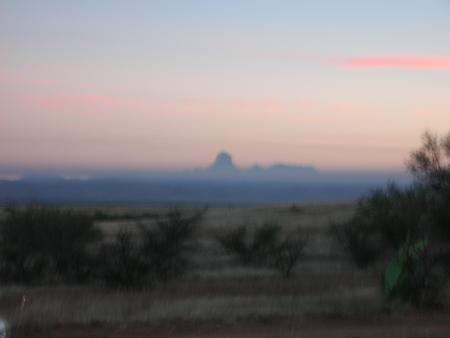 The Baboquivari peak at sunset. 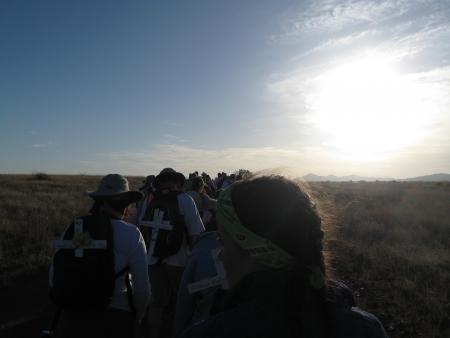 Besides the United States, walkers came from Brazil, Peru, Guatemala, Mexico, Canada, and Germany. We spent the first three days of the walk on the windy paths of the refuge. Many walkers carried crosses with the names of migrants who had died in the desert. 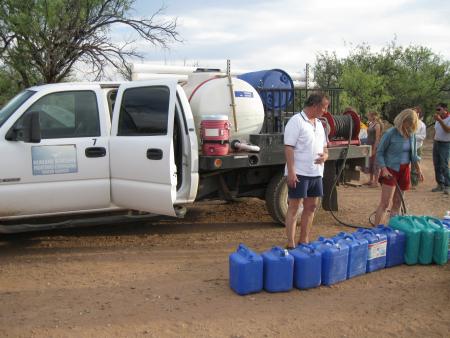 Humane Borders, a humanitarian organization that makes daily runs to Arizona’s southern desert to replenish water tanks for passing migrants, came into our camp every day to fill our water containers. That was also a reminder that migrants walking through the desert do not have the luxury of support vehicles. 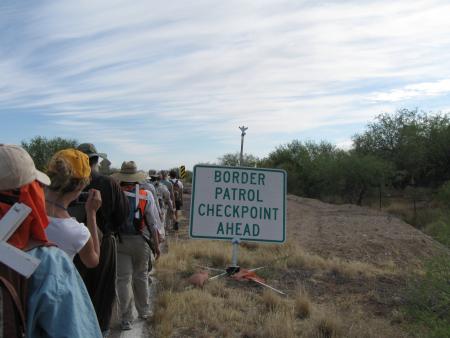 On the fourth day of the walk we went back onto the main road. On that road, of the first 13 vehicles that I saw, 11 were Border Patrol. For the next 30 or so miles this heavy Border Patrol presence would continue in the form of SUVs, armored cars, and ATVs. During the next three day stretch, one walker counted 115 such vehicles. We also saw plenty of helicopters, and unmarked vans driven by soldiers in fatigues. There was a feeling that we were walking though a war zone as we approached the checkpoint. 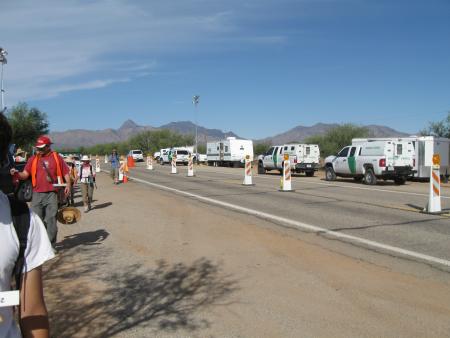 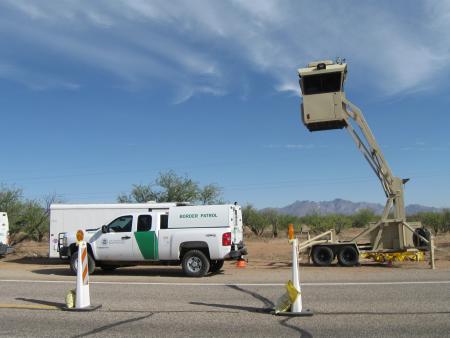 More and more a part of the border enforcement landscape are surveillance towers that often look somewhat like this one at the checkpoint. Border enforcement technology is becoming a profitable business for both large military contractors such as Boeing and small upstarts who are seeing the Arizona borderlands as a perfect laboratory for this emerging global business. 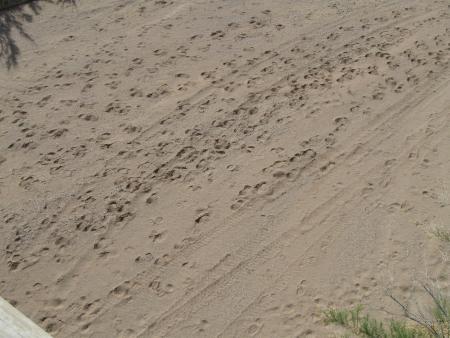 Migrant footsteps in a dry river bed near the road.  We walked on Highway 286 until the town of Three Points. After that we continued on Highway 86 towards Tucson. During these days temperatures exceeded 100 degrees, typical weather as summer approached. 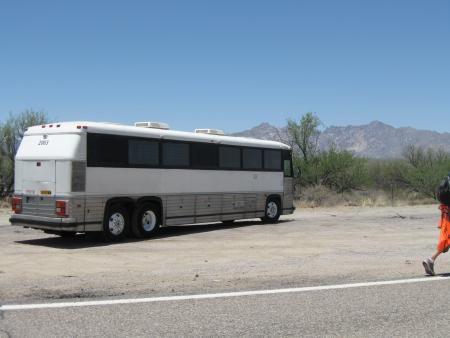 The Department of Homeland Security has contracted the Wackenhut corporation to transport detained migrants in these non-descript busses. We saw dozens of these buses as we walked. 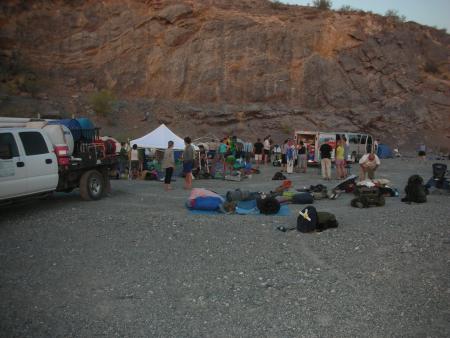 Campsite six miles from Tucson on the night before the last day of the walk. 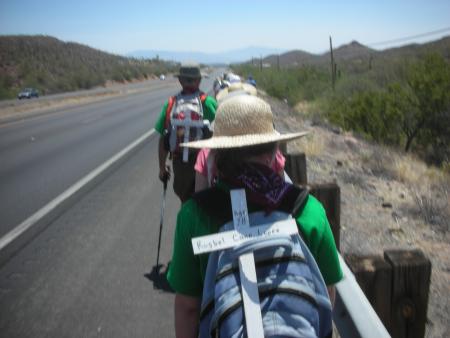 On the walk, with the concentrated and strong Border Patrol presence, we witnessed the same policy and strategy that has now funneled migrants into ever more remote and dangerous areas for the past 15 years. This year, in the Arizona desert 88 people have died, and since these policies are still in place, it is certain that at least 100 more bodies will be recovered by the end of the year. These border deaths have become part of the equation, as predictable as the brutal heat, and thus part of the integral fabric of U.S. border policy itself. At the end of the walk, head organizer Kat Rodriguez, of the Tucson-based Coalición de Derechos Humanos, vowed to the press that this annual walk will continue to happen again and again until these deaths stop.