Last week Brazilian President Dilma Rousseff launched an ambitious program to eradicate extreme poverty by 2014. Under the “Brazil Without Poverty” initiative, the government will spend $12.5 billion a year to expand cash transfers and health, education, and job training services for some 16 million people (8.5% of Brazil’s population) with incomes of up to $44 per month, who have failed to benefit from Brazil’s rapidly expanding economy. The announcement comes as Rousseff continues to be challenged, in the international spotlight, by conflicts that expose the high cost of economic progress borne by Brazil’s most impoverished and indigenous communities.
Tweet
Emily Achtenberg
Rebel Currents
6/9/2011

Last week Brazilian President Dilma Rousseff launched an ambitious program to eradicate extreme poverty by 2014. Under the “Brazil Without Poverty” initiative, the government will spend $12.5 billion a year to expand cash transfers and health, education, and job training services for some 16 million people (8.5% of Brazil’s population) with incomes of up to $44 per month, who have failed to benefit from Brazil’s rapidly expanding economy.

The announcement comes as Rousseff continues to be challenged, in the international spotlight, by conflicts that expose the high cost of economic progress borne by Brazil’s most impoverished and indigenous communities.

Both Amnesty International and the UN 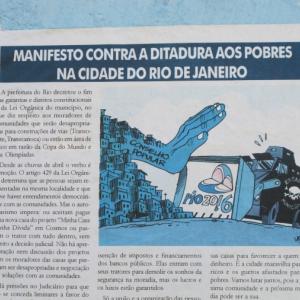 Poster against forced evictions. Credit: Elizondo/ Al Jazeera have recently condemned the forced eviction and human rights violations of favela residents ahead of the 2014 World Cup games and the 2016 Summer Olympics. Complaints have been registered in 8 of the 12 Brazilian host cities, as residents are displaced for highway construction and related infrastructure improvements.

The reports cite a pattern of lack of consultation, inadequate compensation, and failure to provide replacement housing, in violation of international treaties to which Brazil is a signatory. Says Amnesty International head Salil Shetty, “There’s a sense that issues of human rights are coming in the way of development.” Activist Julio Cesar Condaque predicts that by 2014, 1.5 million families could be displaced across Brazil in preparation for these mega-events.

On the eve of the Earth Summit to be held in Brazil in 2012, conservationists and human rights advocates have become increasingly critical of government policies towards protection of the Amazon rain forest and its indigenous residents. Despite Rousseff’s pledge to reduce deforestation by 80% by 2020, deforestation rates have spiked sharply over the last several months in anticipation of forthcoming changes to the national forest code.

Under pressure from agribusiness developers, ranchers, and loggers, Brazil’s lower house of congress approved provisions on May 24 that would open up protected areas to deforestation and grant amnesty to many who have illegally cleared land in the past. On the same day, 2 indigenous rainforest activists were murdered, followed by 3 others within a week, underscoring the tragic consequences of legitimizing impunity.

In these remote regions, where local governments and courts are beholden to powerful economic interests that profit from illegal forest clearance, there is little accountability for criminal activity. According to the Catholic Land Pastoral, a watchdog group, 1150 rural activists have been massacred in Brazil over the past 20 years, although fewer than 100 cases have gone to court since 1988. Only 15 of those who ordered the killings have been convicted, and only one of those is in prison today.  A 2007 study shows a high rate of correlation between areas of significant deforestation and those with the highest murder rates.

While Rousseff has recently increased the government’s military presence in the conflict areas, and has promised to veto the amnesty provisions of the legislation, many believe that more fundamental solutions are needed. As InSight’s Hannah Stone notes, the root cause of the Amazon conflict is Brazil’s unequal land distribution, one of the worst in the world, which has remained virtually unchanged over the past 20 years of Brazil’s democratic government.

Brazil’s environmental agency gave final approval on June 1 for the giant Belo Monte hydroelectric dam in the Amazon which has been the focus of a protracted battle between the government and indigenous, human rights, and environmental advocates. The government says that the $17 billion flagship project, the 3rd largest dam in the world, is critical to Brazil’s future energy needs, and will maintain Brazil’s standing as one of the few large economies powered almost entirely from renewable sources.

Opponents say the dam will flood 120,000 acres of rain forest and settlements, undermine the local fishing economy, release large amounts of methane, and displace 20,000 – 40,000 mostly indigenous people from their native lands. Both Amnesty International and the OAS’s Inter-American Commission on Human Rights (IACHR) have called for a suspension of construction until affected groups are consulted, the rights of indigenous communities are protected, and social/ environmental impact studies are made available in native languages. In response, Rousseff has severed relations with the IACHR.

Last March, a strike by more than 80,000 construction laborers 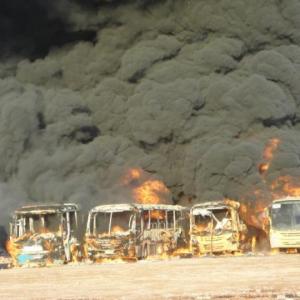 Buses burning at Jirau.at hydroelectric plants, refineries, and other Brazilian mega-worksites effectively “paralyzed the work of progress,” according to political analyst Raúl Zibechi. It was the biggest social protest by Brazilian workers in many years.

The revolt began at the Jirau hydroelectric dam site in the Amazon, where 20,000 migrant workers recruited from Brazil’s poorest regions rebelled against intolerable working and living conditions, exploitation, and abusive treatment. Buses, dormitories, and construction company offices were torched before the strike was finally settled, with thousands of workers eventually losing their jobs.

The workers’ demands, notes Zibechi, were more about dignity than higher wages. “The Jirau revolt,” he concludes, “is the response of the poorest sector, the laborers of Brazil, to the ambitious project of modernization and the deepening of capitalism.”

Conflicts like these challenge the Brazilian government to imagine an alternative future of economic progress without the destruction of impoverished and indigenous communities—one in which a “Brazil Without Poverty” might actually be achievable.