A Vote For Democracy in El Salvador

Last week the Salvadoran legislative assembly voted to repeal controversial Decree 743, which required the Constitutional Court, the country’s highest judicial body, to reach decisions by unanimous consent. After a wave of popular protests, deputies from both the conservative ARENA and the leftist FMLN parties voted for repeal by a two-thirds majority.

The action ended two months of political turmoil, averted a constitutional crisis, and greatly strengthened the role of civil society and democratic institutions in El Salvador.

The political drama began on June 2, when Decree 743 was rushed through the legislature and passed by a coalition of ARENA and other conservative parties, with no public debate. The FMLN delegates abstained. To the surprise of many, President Mauricio Funes immediately signed the bill into law.

The decree effectively paralyzed the Court, which previously required agreement by only four of its five members to declare laws unconstitutional. Historically, the Court has represented and served the country’s most powerful political and economic interests.

But since 2009, when the FMLN-controlled legislature appointed four new members, the Court has charted a progressive direction, striking down several controversial laws in the interest of good governance, transparency, and citizens’ rights. Decree 743, which gave the conservative fifth member an effective veto power over future Court decisions, promised to halt this trend. 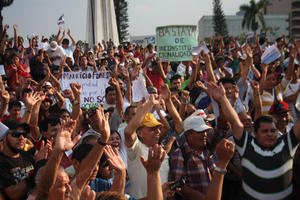 June 5 protest against Decree 743. Credit: Frederick Mesa, El Faro by civil society groups organized through the social media, dubbed “El Salvador Spring” by some observers.  International human rights defenders harshly criticized the decree as an improper attack on judicial independence and the separation of powers, adopted by a process completely lacking in transparency.

Much of the criticism focused on Funes, who some say played a role in formulating the decree. “We condemn what the president did,” said Loida Robles, attorney for the legal advocacy group FESPAD. “We hoped he would veto the decree.”

Subsequently, ARENA reversed its position and called on the FMLN to support a repeal measure. The FMLN, after initially calling the events of June 2 “a tragedy for democracy,” indicated that it was not unhappy with curbing the Court’s powers and, in any case, would not “bail out” ARENA by joining a repeal effort.

Despite growing popular opposition, Funes defended the decree in a full-page newspaper ad, emphasizing that judicial consensus would promote institutional stability by preventing conflict between the government branches. On June 8, the Court declared (by its usual 4/5 majority) that the decree was an unconstitutional violation of the separation of powers, setting the stage for a constitutional crisis.

How to explain these political machinations? To begin with, ARENA’s promotion of Decree 743 was in part retaliation against the Court’s recent dissolution of two conservative parties, which had failed to achieve the minimum percentage of votes required by the electoral code in the last two presidential elections. (In 2009, these parties actually withdrew their candidates in an effort to unite conservative voters against Funes.) The Court’s decision deprived these parties of government funding and representation on the national elections tribunal, putting the right at a serious disadvantage ahead of the 2012 local and legislative elections.

ARENA’s efforts were also a precautionary measure to head off potential Court rulings against CAFTA and dollarization, two hallmarks of neoliberal economic policy implemented by the former ARENA government. Most importantly, ARENA hoped to forestall a widely-anticipated Court action to overturn the 1993 Amnesty Law, which prohibits the prosecution of crimes committed during El Salvador’s 12-year civil war. The recent indictment by a Spanish Court of 20 Salvadoran military officers for the 1989 massacre of six Jesuit priests, their housekeeper, and her daughter, has refocused attention on the Amnesty Law, which the defendants claim shields them from international as well as domestic prosecution.

Ex-president and current ARENA party chief Alfredo Cristiani, whose cabinet members were included in the indictment and who may himself be vulnerable to prosecution without the Amnesty Law’s protection, has acknowledged that “misinformation” about the Court’s intentions towards the Amnesty Law was the primary reason for ARENA’s promotion of Decree 743. Once reassured by the Court that the Amnesty Law was not in danger of repeal--and sensing the depth of popular opposition--ARENA reversed its position and opposed the decree.

The FMLN, too, has felt threatened by Court decisions perceived as contrary to their institutional and political interests, especially in the run-up to the 2012 elections. The party opposes recent Court rulings that allow non-party candidates to run for office and permit voting for individuals rather than party slates, claiming that these measures advantage wealthier candidates and undermine the party’s quota system to ensure adequate representation of youth and women.

The FMLN has also criticized the Court for prohibiting the transfer of funds from individual ministries to the president’s “discretionary account,” and has raised concerns that the Court could overturn the government’s 2012 budget, threatening its legislative agenda. The FMLN accuses the Court of attempting to legislate reform through its judicial rulings, overstepping its constitutional boundaries.

And while the FMLN 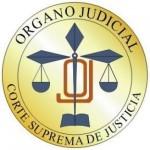 Credit: El Salvador Noticias. officially favors repeal of the Amnesty Law, more than a few  party leaders and high-ranking government officials (such as former guerrilla leader turned Public Security Chief Manuel Melgar) are at risk of prosecution if the law is repealed. While the FMLN is responsible for only an estimated 5% of all war crimes committed, leaders fear that the conservative Attorney General would make them a special target. Since assuming the presidency, Funes has made it clear that he won’t pressure Congress to repeal the Amnesty Law, in the interest of not “reopening old wounds” from the Civil War.

Whether or not conservative interests deliberately engineered the constitutional conflict around Decree 743 to destabilize the government ahead of the 2012 elections, as the FMLN now claims, it seems clear that right-wing forces successfully exploited the situation to divide the FMLN--and especially Funes--from large segments of their popular base, at least temporarily. As a news bulletin by the popular education collective Equipo Maiz notes with irony, ARENA manipulated public opinion to blame the FMLN for the crisis, rather than those responsible for passing the law in the first place.

As for Funes’ motives in supporting Decree 743, most political observers are still scratching their heads. While some view his actions as proof of a growing alliance with conservative business interests, others see a pragmatic decision to gain conservative support for the FMLN's legislative agenda. Still others view Funes as the victim of a political set-up, by either the left or the right.

While Funes is widely expected to sign the repeal of Decree 743 into law, he appears to have paid a heavy price for the debacle. Recent polls show his approval ratings plummeting to 41%, down from 83% last April, at least in San Salvador.

While Funes may be the biggest loser, the Salvadoran people and civil society organizations are the biggest winners. Their ability to mobilize and intervene in the political process to strengthen the viability of El Salvador’s democratic institutions is no small victory.