Bolivia: A Visit From Lula as TIPNIS Negotiations Falter

Negotiations between the Bolivian government and indigenous groups protesting the proposed TIPNIS highway broke down before getting off the ground this week, while a visit from Brazil’s ex-president Lula served as a reminder of the larger geopolitical interests involved. Brazil has a major stake in the road's construction, but it also needs a stable political environment in Bolivia to advance its overall economic agenda.
Tweet
Emily Achtenberg
Rebel Currents
9/2/2011

Negotiations between the Bolivian government and indigenous groups protesting the proposed TIPNIS highway broke down before getting off the ground this week, while a visit from Brazil’s ex-president Luiz Inácio Lula da Silva served as a reminder of the larger geopolitical interests involved.

While both sides have agreed in principle on an agenda (the protesters’ 16 demands) and a structure for negotiations (6 “tables” with the involvement of 10 government ministers), they have been unable to agree on the ground rules or location for a meeting. Currently, the government is insisting that the initial dialogue take place at a site away from the march route, with participation limited to a group of ministers and marchers’ representatives, and that all sectors 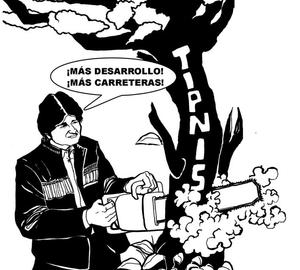 "More development! more roads!" Credit: www.isiboro-sécure.compotentially affected by the 16 demands, inside and outside the TIPNIS, be included. But the protestors want to meet along the march route precisely to enable the broadest possible participation, consistent with indigenous traditions. They also want all 10 ministers to be present, along with President Evo Morales, and refuse to include groups that support the road in their negotiations.

While officially inviting dialogue, the government continues its relentless efforts to discredit the protest, creating a hostile climate for negotiations. Minister of the Presidency Carlos Romero has accused the marchers of accepting transportation from a timber company which is colluding with TIPNIS leaders to carry out illicit logging activities. Minister of Government Sacha Llorenti insists that right-wing interests in Santa Cruz and Beni, associated with the former “Media Luna” conservative opposition to the MAS government, are behind the mobilization. ABC, the state highway agency, has announced that it will sue ex-viceminister Alejandro Almaraz, an outspoken critic of the road, for slander (Almarez has denounced irregularities in the contracting process with OAS, the Brazilian construction company that is building the road.) On Thursday, Evo Morales stated that there is no viable alternative route for the proposed highway that does not go through the TIPNIS.

As tensions continue to escalate, police broke up two road blockades by indigenous supporters of the march in Santa Cruz. A blockade ahead of the march, by colonists and farmers who support the road, is considered by the government to be a “vigil” and will not be disturbed. A major demonstration by pro-government sectors in favor of the road is planned for this Saturday in Cochabamba. Meanwhile, the march continues to pick up steam, with 1700 protesters arriving in San Borja, en route to La Paz. 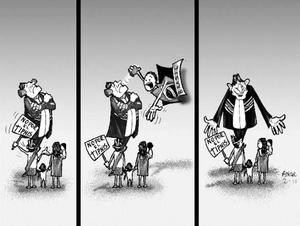 Brazil forces Evo to accommodate TIPNIS protesters. Credit: Página Siete.In his visit to Bolivia this week, Brazilian ex-president Lula reportedly discussed the TIPNIS conflict with Morales. Brazil has a major geopolitical interest in the TIPNIS road, which will link its goods with ports in Chile, cutting the travel time from Trinidad (Bolivia) to Cochabamba from 16 to 4 hours. Brazil is financing 80% of the road’s construction cost with a low-interest loan.

Brazil also has a major stake in seeing the TIPNIS conflict resolved and in maintaining a stable, left-friendly political environment in Bolivia to facilitate its overall economic agenda. In 2008, Brazil’s intervention was critical in heading off a near-coup by conservative economic and political forces in the eastern lowlands, where Brazilian agribusiness is deeply entrenched. Just how Brazil’s interests will play out in the current crisis is a critical issue that bears watching in the coming weeks and months.