A Tale of Two Voyages and the Global Color Line

A recent tragedy in the waters separating the Dominican Republic and Puerto Rico led to dozens of migrant fatalities. In comparison to the intense reporting on the sinking of the luxury cruise ship, Costa Concordia, off of Italy's coast in January, media coverage of the deaths of Dominican migrants was poor at best. The disparity exemplifies who counts and who doesn't in a world of great inequality.
Tweet
Joseph Nevins
Border Wars
2/19/2012

The tragic running aground of the Costa Concordia in mid-January, and dramatic images of the massive luxury cruise ship keeled over off the coast of Tuscany, Italy, made for intense media coverage. With 17 confirmed fatalities and another 15 individuals still unaccounted for among the roughly 4,200 passengers and crew, major news outlets—such as The New York Times, the Los Angeles Times, and CNN—each ran literally dozens of stories on the catastrophe. A month later, reports related to the disaster continue to appear. 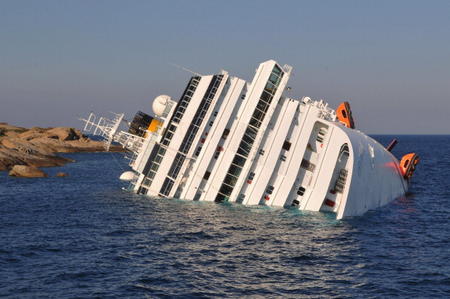 Compare the media attention to another sea voyage much closer to home, here in the United States, that also ended in death—that of a boat with no name, off the shores of the Dominican Republic. On February 4, a small vessel carrying more than 70 migrants hoping to reach the nearby, U.S. semi-colony of Puerto Rico quickly ran into trouble upon leaving the Dominican town of Nagua. In the face of strong waves, it began to break apart, and sank.

Survivors report that passengers struggled to gain hold of the few gas containers on board to use as flotation devices. Some spent eight hours floating at sea and incurred severe sun burns before fishermen rescued them. At least 52 of the migrants drowned. The search for bodies now officially over.

In contrast to the Costa Concordia case, the aforementioned newspapers have ignored this latest tragedy, while CNN.com ran one brief report in its immediate aftermath. While some news outlets carried wire reports of the doomed voyage, it is, in effect, a non-story. 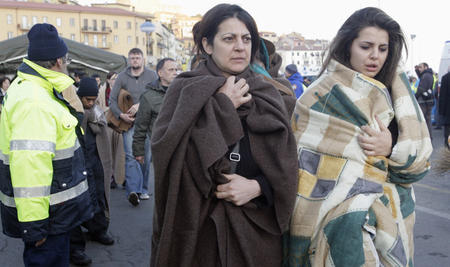 Costa Concordia evacuees. Credit: SkyNewsThat the attention afforded to the deaths of almost exclusively luxury tourists from Western Europe dwarfs that paid to the drowning of dozens of unauthorized Dominican migrants reproduces a world of profound inequality and injustice. It demonstrates just how deeply “the problem of the color line”—the global racial divide that W.E.B. DuBois so powerfully decried in his epic 1903 book The Souls of Black Folk as “the problem of the Twentieth Century”—remains very much alive today.

There is a long history of deaths associated with the dangerous journey of migrants clandestinely trying to reach Puerto Rico from the Dominican Republic across the Mona Passage, “a strait of about 100 miles (160 kilometers),” according to the Associated Press, “that is considered treacherous even for experienced sailors with advanced equipment.” A May 12, 1998, report in the Los Angeles Times, for example, spoke of “human bones littering the small shoals and islets between the Dominican and Puerto Rican shores.” In November 2003, the U.S. Border Patrol estimated that, over the previous three years, nearly 300 people had either died or vanished—undoubtedly an undercount—while crossing the Mona Passage.

Among the worst single incidents was one in August 2004. During a particularly horrific voyage, 47 passengers perished at sea, while another eight died after being rescued by Dominican authorities. Another occurred in late 2008 when 29 died from dehydration and exposure after being adrift at sea for two weeks, with the survivors forced to resort to cannibalism. Just this past December, a boat with about 100 passengers capsized just off the coast of Nagua, with three bodies recovered and upwards of 27 other migrants never found. 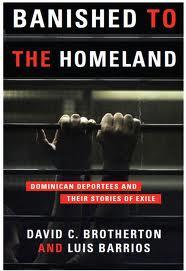 According to David Brotherton and Luis Barrios in their recent book, Banished to the Homeland, the U.S. government has arrested and deported between 30,000 and 50,000 persons of Dominican origin over the last decade in the name of the ever-expanding categories of public safety and national security.

Large numbers of them eventually try to return via Puerto Rico, report Brotherton and Barrios, often by boat from Nagua. With many having left their country of birth when they were youths, even infants, they frequently have deep and longstanding ties to the United States—and thin ones at best to the Dominican Republic. As such, it is not uncommon for deportation to result in the separation of parents from their (typically U.S. citizen) children. Such factors combined with the deep poverty that plagues much of Dominican Republic results in deportees’ seeing little choice but to risk their lives to return “illegally” to what is effectively their home.

Whiteness, DuBois once wrote, “is the ownership of the earth forever and ever. Amen.” Not surprisingly, it is consequently the passing of “owners” as embodied by the vast majority of the dead and missing on the Costa Concordia whose misfortune garners intense attention. Meanwhile, the plight of the nonwhite Dominican voyagers falls into comparative oblivion. 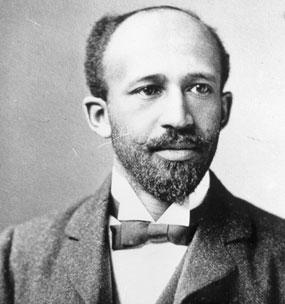 Those compelled to risk their lives in order to reach spaces of relative social and biophysical security are the “owned”: unlike the pleasure-seekers who can generally traverse global space when and where they want, their mobility across international boundaries—especially those dividing the rich and poor, the white and non-white, “owners” and the dispossessed—is highly limited. Indeed, it is often violently repulsed.

The sea boundary between the Dominican Republic and the United States is thus very much like that between North Africa and the European Union or the U.S.-Mexico divide: it reflects and helps to produce places and peoples of privilege and disadvantage. As such, it exemplifies the connections and divisions between those granted life and those assigned to the realm of death—and all the stations in between the extremes of injustice.

When this need is acted upon in the face of Washington’s ever-more formidable apparatus of immigration and boundary policing, migration for the Dominican Republic’s disadvantaged classes increasingly becomes literally a death-defying undertaking.

In this regard, the mainstream media’s effective burial of the latest episode of death involving migrants from the Dominican Republic is part of the killing. By giving the story attention that is grossly inadequate at best and obscuring the associated and profound injustices that have long governed U.S.-Dominican relations, the media contributes to that which brought about the fatal voyage, while increasing the likelihood that a similar tragedy will reoccur—in the Mona Passage and elsewhere along the global color line. 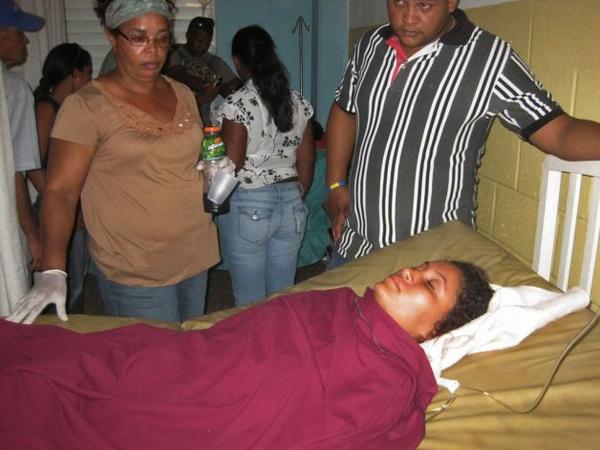