ALBA Expands its Allies in the Caribbean (Part 2 of 2)

Two years after Haiti's devastating earthquake, the failed reconstruction has shown that a great deal of the international community’s optimism, which emerged after the earthquake, was simply talk. Outside of a determined group of Latin American and Caribbean countries, the majority of international efforts in Haiti are shameful.
Tweet
Kevin Edmonds 2/23/2012 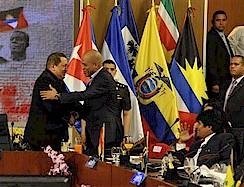 When looking at the vast array of reconstruction plans and promises of aid to rebuild Haiti, the old cliché "actions speak louder than words" rings true. Two years later, the failed reconstruction of Haiti has shown that a great deal of the international community’s optimism which emerged after the earthquake was simply that—talk. While this may be a harsh criticism of seemingly well-intentioned efforts, when contrasted to the actions of a small but determined group of Latin American and Caribbean countries, the majority of international efforts in Haiti are shameful.

The countries which comprise the Bolivarian Alternative of the Americas (ALBA) have always regarded Haiti as an important sister nation and partner in the fight against imperialism and neoliberal globalization. At the inauguration of President Michel Martelly last May, Héctor Rodríguez, vice-president of the Social Area Council of Venezuela wasted no time in renewing ALBA’s cooperation to Haiti, stating, “We have a historical debt to pay to our brothers and sisters in Haiti, because they helped us liberate our Latin America.” Rodríguez’s remarks referred to the assistance of then-Haitian President Petion to Simón Bolívar during the independence wars against Spain, where newly liberated Haiti provided soldiers, financial aid, and political asylum to the Latin American revolutionary.

The first week of February saw the 11 summit of the Bolivarian Alternative of the Americas (ALBA) convene in Caracas, Venezuela. With Haiti in attendance as a permanent observer, Martelly’s attendance at the summit was a surprise to many, due to his reactionary political program domestically, his close relationships with the Haitian elite, and his determination that Haiti will achieve real and sustainable development through neoliberal policy and the construction of low-wage sweatshops.

Despite Martelly’s political positions, the impact of ALBA’s assistance to Haiti (primarily via Cuba and Venezuela) is too powerful for him to ignore—doing so would discredit him in the eyes of the Haitian people. At a regional summit of the Community of Latin American and Caribbean States, which was founded last December, Martelly confirmed the vital role Venezuelan aid is playing in Haiti, saying that "The cooperation with Venezuela is the most important in Haiti right now in terms of impact, direct impact... We are grateful to President Chávez for helping us from the bottom of his heart.”

The principal reason why Venezuela and Cuba have been so effective in delivering assistance to Haiti is their engagement in developing infrastructure and professional capacity prior to the earthquake. These countries had spent tremendous time and resources developing networks, relationships and infrastructure which would prove critical to the relief effort, and they had a proven capacity to work constructively with the ministries of the Haitian government and organizations of civil society.

Perhaps the most important example of solidarity in Haiti has been the deployment of Cuban medical brigades. Cuban medical assistance to Haiti began after Hurricane George in 1998. An agreement to establish a sustainable model of public healthcare was initiated between Fidel Castro and President René Préval. The model would focus on the immediate provision of services and the construction of medical clinics throughout the country, and the beginning of training of Haitian doctors, nurses and technicians, both domestically and at the Latin American School of Medicine in Cuba (ELAM). Seventy Haitian students were enrolled per year at ELAM; the first year of graduation was 2005.

By 2007, eight years after the Cuban medical cooperation began in earnest, Cuba had become the primary healthcare provider for nearly 75% of the population which has access to healthcare services, with over 14 million medical consultations. Statistics from the Pan American Health Organization in 2007 indicated that the presence of the Cuban doctors had led to several dramatic improvements in several key public health indicators.

On the eve of the earthquake, Cuba had trained 550 Haitian doctors at no cost, with another 567 medical students enrolled in Cuba. These doctors, in addition to Cuban medical personnel, would provide the most widespread and successful medical campaign in post-earthquake Haiti. In an incredibly important gesture at the United Nations Donor Conference in March 2010, Cuba pledged to rebuild a sustainable, public healthcare system in Haiti—over ten years and at a cost of $690.5 million. Not wanting to be outdone by small, socialist Cuba, this ambitious and deeply needed plan for Haiti was virtually ignored by the international media. Despite the rejection by the United Nations, Cuba’s medical efforts in Haiti continue, with collaborative assistance from Venezuela, Brazil and Norway.

Notwithstanding the cholera epidemic (introduced to Haiti due to the negligence of United Nations troops), many non-governmental organizations have left the country as their funds dried up. Cuba is once again leading the charge to save lives. Its medical brigades have established 44 cholera treatment units and 23 cholera treatment centers. They have achieved a mortality rate of just 0.36% in the areas they serve, four times lower than the national average. Cuba’s medical assistance to Haiti was chosen by Project Censored as one of the top 25 underreported news stories in 2011.

With the signing of agreements with Venezuela in 2007 during President Hugo Chávez’s visit to the country, a series of significant projects were ushered in, including US$80 million for an oil refinery, US$56 million for three electricity plants, US$4 million for a liquid gas plant, and US$3 million for a waste collection program.

Venezuela has also provided significant financial assistance to Haiti through the terms of the Petrocaribe program. Under the program, Haiti became a participant in a preferential trade agreement, where they could pay for Venezuelan oil over a 25-year period, with 1 % interest rate.

After the earthquake Venezuela once again stepped up to help Haiti, by pledging US$2.4 billion in reconstruction and relief aid, the largest financial contribution among 58 donors, according to the U.N. Office of the Special Envoy for Haiti. In another significant act of solidarity, in June 2010, the Venezuelan government also cancelled all of Haiti’s debt with Petrocaribe—amounting to the cancellation of almost US$400 million.

The February 2012 ALBA summit in Caracas produced a further roadmap to Haiti’s recovery, focusing on Haiti’s sustainable reconstruction, building infrastructure, and increasing independence in the areas of energy, agriculture, healthcare and education.

Due to decades of unfair trade and aid policies, Haiti currently imports nearly 80% of its main food staple, rice. Venezuelan assistance is helping to restore the devastated rice industry in Haiti’s Artibonite Valley by providing technical assistance and financial aid to Haitian farmers. According to President Martelly, the benefits of Petrocaribe include, “a deal where we repay the amount owed with rice, so this is good for us. Because the main thing for us is to create jobs.”

Implementing assistance programs which develop rural linkages in Haiti and encourage domestic industrial growth is something that is unfortunately missing from many of the reconstruction plans of non-ALBA countries. For example, despite many announcements of reform, current USAID food assistance policies prohibit the procurement of foodstuffs from local sources. This means that US food aid (food grown and subsidized in the United States) is dumped into Haiti, destroying the agricultural industry. By comparison, Venezuela is creating incentives for Haitian farmers to cultivate rice once again in an effort to develop food security and employment opportunities.

In contrast to the aid provided by the United States and other major donors, President Martelly has stated that Venezuela’s aid comes without excessive conditions and bureaucratic controls. "Sometimes for a simple project, it might take too long for the project to happen," he remarked. "If you're asking me which one flows better, which one is easier, I'll tell you Venezuela."

The foreign ministers of ALBA countries will meet at a summit to be held in Jacmel, Haiti in March. It would be naive to assume that the United States will let Haiti join ALBA or establish deeper ties without a fight. U.S. diplomatic cables released by Wikileaks have revealed that the United States government and the large oil companies fought to prevent Haiti from joining Petrocaribe under the administration of President Préval. The United States and big oil exerted significant political pressure upon Préval, fearing the loss of traditional geopolitical dominance, not to speak of handsome profit margins from fuel delivery. (Haiti received its first shipment of Petrocaribe fuel in March 2008.)

Haiti’s entry into full membership of ALBA would unleash untold pressure upon whatever Haitian government attempts to do so. Whether President Martelly’s gestures are acts of political posturing or a signal of genuine intention to join ALBA, it is too early to tell. What is clear is that ALBA has offered extensive and unconditional support to the Haitian people, in contrast to many hollow promises of the international community. It has provided a model of solidarity and sustainability which should be emulated in the reconstruction of Haiti.